Flint is reclaiming its narrative through fashion

Understanding how GoodBoy survived launching a business amid tragic circumstances is as simple as understanding the resilience of Flint's people.

"We didn't let the environment and what happened control our outlook," Mixon says. "It was pretty bleak at the beginning. We didn't know what the effects would be. However, we had an optimistic outlook and said, 'Flint's gonna come out on top, we're gonna get through this.' Let's persevere and tell that story."

Originally from Niagara Falls, New York, Mixon moved to Flint during his childhood. He graduated from Flint Northern High School and grew up on the north side, near MLK and Welch boulevards. He says Flint's history and culture became "grafted into" him, and he's adopted the city's ethos into his clothing brand.

"It's very industrial, blue-collar. I call it 'small city, big culture,'" he says. "That influenced my creativity as far as how I design. The people here, they're about community, about building up their city, shifting the culture. Those are the core values I come from when I create."

Mixon's business began by investing his $1,000 tax refund into T-shirts and bow ties featuring his GoodBoy logo. He initially sold them out of boxes. Now, his store occupies prominent space in downtown Flint on Saginaw Street and features numerous streetwear-inspired styles and collections. He was the recipient of a $20,000 AT&T Agility Challenge grant in 2016, and partnered with the Crim Festival of Races, an annual series of races in Flint that attracts thousands of runners to the city, to design shirts in 2018.

But GoodBoy was also part of a bigger movement — a celebration of the values that are distinctively "Flint," expressed creatively through fashion.

James Thigpen Jr. is a Flint native, artist, and designer who has lived and worked in New York and now resides in Detroit. Everywhere he turned in Detroit, he saw a visual expression of pride in the city — the Detroit Tigers' Old English "D" logo.

"You see that 'D' on everything," Thigpen Jr. sys. "Flint doesn't have a major sports team, so how do we get that look? There was a void here, how do we put a face to the culture that already exists?"

In his spare time while working for Jazz at Lincoln Center in New York, Thigpen Jr. and friend DeMarcus Smith began working on an "F" logo over email. They settled on a design that featured the lowercase letter as the staple of their brand.

"The 'f' is welcoming, but still rugged," Thigpen Jr. says. "We wanted something that looked historical, but was also strong and looked like it had a foundation to it."

Thigpen Jr. launched his apparel brand, Eight One Zero (myeightonezero.com), approximately four years ago. He and partner Jordan Munerlyn sell shirts and other merchandise online and at pop-up events, with future plans for a brick-and-mortar location. Their most popular item is the baseball hats featuring their "f" design. The company's social media accounts regularly feature pictures of Flint transplants from around the country who have purchased the hat and send pictures of themselves wearing it.

"I want everyone in the city to have this hat, and wear it like a badge of honor," he says.

Creating that sense of pride, more than creating a clothing brand, was the point.

"I like to say Eight One Zero disguises as a clothing company, but really, it's to highlight this community and change the brand of this community," Thigpen Jr. says. "Flint since [Michael Moore's documentary] Roger and Me has been going through this — people look down on us for a lot of different reasons. The water crisis came, the crime rate, it's just never a good look. The void that we fill is to bring pride, to talk about the things that are so good, to create a hub for people to communicate all over the world."

Thigpen Jr. himself is a product of that culture. He found his passion in Flint Schools, and his education from K-12 through his undergraduate degree happened in Flint. He knew he wanted to be an artist since he was in second grade at Sobey Elementary. He attended Whittier Classical Academy and Flint Central High School — both renowned for their arts programs before the schools were closed. He completed his undergraduate studies at Mott Community College and the University of Michigan-Flint, and got many career opportunities through internships and professional experiences that eventually led him to New York and back to Michigan.

"My childhood was amazing; it wasn't this tragic childhood," Thigpen Jr. says. "That's why I get bitter when people don't realize what Flint means. We're still creating here in Flint, creating a new identity, re-learning who we are. I'm glad Eight One Zero can be a part of that." 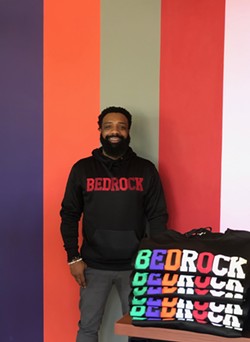 "Book club calls for the comfiest of comfy sweats, and I'm really into these Bedrock sweatshirts right now," actress Gabrielle Union said in an endorsement of Bedrock Apparel (140 E. 2nd St., Flint; facebook.com/bedrockapparelco) in the July 2018 issue of InStyle magazine. "They feel like clouds on the inside."

By then, Jason Trice, a Flint native and owner of Bedrock, had been selling merchandise online, but hadn't yet opened his new retail storefront — located in Flint's newly renovated Capitol Theatre building — when his phone let him know the article was published.

"My phone started going crazy," Trice says. "I looked down and a guy from the Netherlands was ordering a sweatshirt. He sent me a message and said, 'I want the Gabrielle Union sweatshirt.'"

Bedrock, like GoodBoy and Eight One Zero, was founded on a set of core values — that anything strong and resilient also has to have a solid foundation. Trice himself is a product of those beliefs. He grew up on Flint's northside and was a star athlete at Flint Northern and later Grand Valley State, where he was a wide receiver on the football team and was inducted into their Hall of Fame in 2017. Flint has a long legacy of producing elite athletes in a wide range of sports, and growing up in that environment helped shape Trice's determination and character.

"We had a lot of talent come out of here, and everywhere we go, we still get that notoriety, where people know we're strong, tough, hard-working," Trice says. "People always feel the same about Flint guys when they play us, no matter what sport it is, they always know you're gonna have to bring your lunch pail, because that's how we're coming; that's how we all are."

He launched an apparel company in west Michigan after college, and worked all over the country, including with NBA star LeBron James in Miami, before moving back to Flint. He's excited to be a part of many new businesses and investments in downtown Flint, and also encourages people to spend their money in the city.

"When I moved back here, I felt this was something I could do, getting in on the ground floor of the fashion industry in downtown Flint," he says. "Myself, GoodBoy, Eight One Zero, we're all friends or building friendships and supporting each other. We're all gonna be a driving force in a city that really needs it, making sure your dollars stay in your community instead of running off to the internet. I might pay $1 extra for bananas at the farmers market, but Walmart isn't spending that money back into our community. Local farmers and grocers are. We are all here, and that's a good thing for the city."

Beyond fashion and beyond Flint

Flint, in different ways, has inspired and shaped Mixon, Thigpen Jr., and Trice. But their brands are not just "Flint" brands — the message behind them can resonate anywhere.

Mixon has an interest in fashion, but the root of his passion is simply creativity. He's also inspired by technology, and the potential for job creation, as drivers of change in any community.

"I'm an artist first, fashion person second," Mixon says. "I've had to self-educate. I've set GoodBoy on a trajectory to be not just a store. How can good culture in a place like Flint influence the rest of the world? We want to create jobs, we want to create job readiness. We're trying to expand and create an experience in Flint."

Bedrock evokes images of Flint because it's synonymous with the Flintsones, but Trice never intended it to be solely a Flint brand — as evidenced by the fact that it has earned endorsements from non-Flint celebrities like Union and former NBA star Jalen Rose, among others.

"I'll always reiterate: Bedrock isn't just about Flint," Trice says. "Bedrock is about strong, solid people. This strong, solid person and my strong, solid group decided to start this brand where we're from, but we also want to lend it to other solid people in this world. We are strong in Flint, but we have so many connections because there are like-minded people everywhere in the world."

Flint's recent history, including the water crisis and the typical afflictions of Rust Belt cities — crime, unemployment, and poverty — have often put the narrative of the city and its people in the hands of outsiders who don't really understand the character and history that exists in Flint and its contributions to the world. Even if the intent of each company is to offer broad appeal, the values they were founded on are still a celebration of the creative powers that products of the city have to offer.

"We know how hard Flint works, how real Flint is," Thigpen Jr. says. "And we want to show the world."