Calling from her home in Los Angeles, Dita Von Teese is excited for her upcoming trip to Michigan. The burlesque superstar is getting ready to take her The Art of the Teese show on the road, which includes its first-ever stop in Detroit. In a way, though, Michigan is still her real home, and her rabid fan base here seems to confirm that. According to Von Teese, the Detroit presale was one of the fastest-selling cities on the tour. Von Teese was genuinely shocked by the warm reception.

"It's my first time doing a show there since ... ever, basically," Von Teese says. "Actually, I did one strip club in Flint in like, 1993. There were like five random fans."

Today, 44-year-old Von Teese is probably the world's premier burlesque performer, a modern-day beauty icon in the vein of the archetypal Old Hollywood femme fatale: alabaster skin, ruby red lips, jet black hair, and voluptuous curves. Since her start in 1992, Von Teese has appeared in magazines from Playboy to Vogue, launched her own clothing line and makeup collection, wrote a New York Times best-selling book, and was briefly married to goth rocker Marilyn Manson (more on that later). LA Weekly declared her to be "the most famous stripper in America."

But long before she was Dita Von Teese from Los Angeles, she was shy, blonde Heather Sweet from a farming town in Michigan. West Branch to be precise. "You're from Michigan, right?" she asks. "I can actually say, 'West Branch, Michigan,' and people might read this and know where that is."

Born in Rochester to a machinist father and a manicurist mother, Von Teese moved to West Branch when she was 5, and lived there until she was 12. Von Teese describes Heather Sweet as a "dishwater blonde, mediocre-looking girl," a middle child who studied ballet from an early age and used to love watching Golden Age Hollywood movies with her antique-collecting mother.

That was when she says she saw the woman she wanted to become. "My early childhood experiences were seeing ladies I wanted to be like — ladies like Hedy Lamarr and Rita Hayworth and Marilyn Monroe," she says. "I grew up thinking, 'I'm gonna be like that when I'm big!'"

By her tween years, her father's job forced the family to move to Orange County, Calif., for work. "It was a huge culture shock," Von Teese says. "I was just thrown into the thick of it. It took a long time before I had any friends."

By 15, she quit ballet and started working in a lingerie store so she could buy her own clothes. That was when she began to develop her retro fashion sense.

"I didn't have money like a lot of my friends, so I always had to work," she says. "I would shop for vintage because my friends would have all the cool jeans and sneakers and stuff, and I never got to have that sort of thing, so I started buying vintage because I felt like I could emulate designer looks that I liked that I'd see in Vogue."

Von Teese started dying her hair black, and dressing like an Old Hollywood star — corsets and bullet bras and vintage suits. "That's when my life changed, and where I felt like I finally had my confidence," she says.

By the late '90s, Von Teese says burlesque revival was still very much underground. Most of what Von Teese knew about it, she says, she gleaned from magazines from its heyday in the 1930s and '40s. "There were a few performers in LA, like there was this show the Velvet Hammer, and my friend Catherine D'Lish, and a few performers in the U.K.," she says. "But it wasn't much of a scene. So it kind of started there for me." 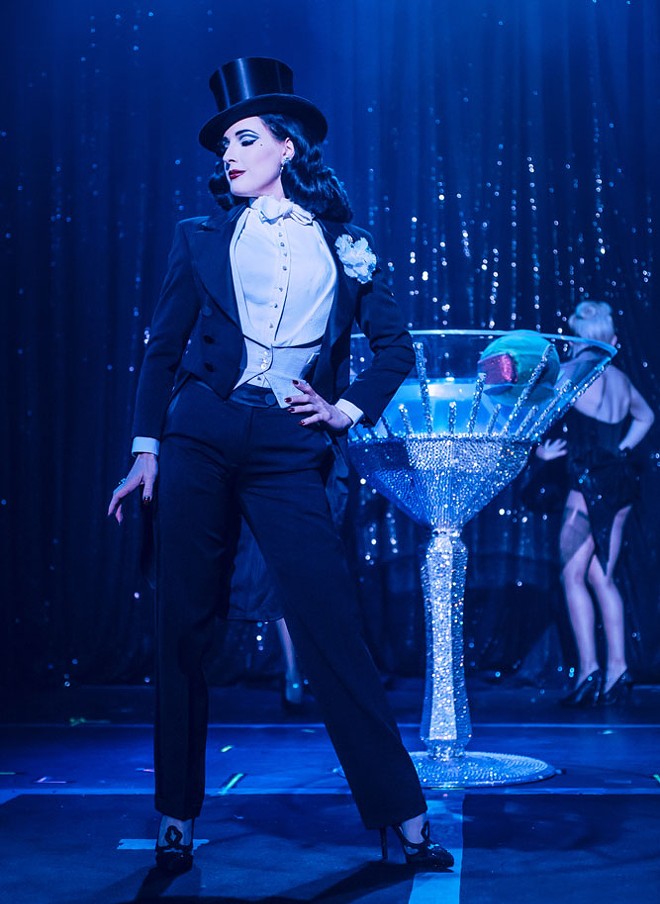 For Von Teese, the transition from stripper to burlesque revivalist was seamless. Her Playboy notoriety enabled her to perform in strip clubs across the country, and the shows kept growing from there. "I used to do burlesque in strip clubs, so I don't have the same indignant need to tell people that what I'm doing is different than what strippers are doing," she says. "I'm not here to change people's minds about what it is to be a stripper. I'm not trying to tell people I'm better than a stripper or any of those things." She points out that the word "stripper" was coined in burlesque's heyday in 1930s. "It's not like it's a bad word, in my opinion," she says.

But as Von Teese's show grew from headlining strip clubs to the elaborate stage show it is today, she says she noticed her audience change: from primarily straight males to primarily females and gay men. Von Teese calls her new audience part of "an unlikely feminist movement" — "something that's vastly different than what it was during burlesque's heyday ... and definitely different than what I think strip clubs are known for."

Von Teese thinks the reason her show resonates with other women and gay men is the same reason she started doing burlesque and pin-up photos in the first place: a liberating sense of control of her own image, and the idea of glamorous reinvention.

Von Teese touches on the subject in her book, Your Beauty Mark: The Ultimate Guide to Eccentric Glamour, published in 2015. "It was about creating beauty and glamour from a different perspective," she says. "Like Sports Illustrated swimsuit models — I don't look like that. I'll never look like that. That's the kind of beauty that modern media holds in high regard. And I'm not like that. So I thought, well, I can have other symbols of sensuality and beauty that are more creative. So that's why I always loved pin-up and burlesque, and I think that's something that other women are getting the message that I got from finding other idols of beauty and glamour and sensuality." 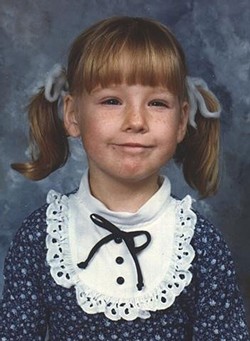 So you could say Dita Von Teese is a creation of Heather Sweet — the Holly Golightly to her Lulamae Barnes. Does that make her an artist, then? Von Teese isn't going to call herself one. "I don't mind if other people call me an artist, but I'm certainly not going to do it," she says. "It's too pretentious!"

Or Brian Hugh Warner from Canton, Ohio — better known as Marilyn Manson, to whom Von Teese was briefly married in the mid-2000s. Eventually, Von Teese filed for divorce, citing "irreconcilable differences." Von Teese says she and her former husband are good friends now (he even blurbed her book). "We have a lot in common, I feel," she says. "But we had a lot of differences as well. He is someone who doesn't want to reference his past. He doesn't want to be who he was from Ohio. I think people seeing a part of shy Heather Sweet from Michigan is an important part of what I do. I'm not trying to be a completely different person."


Von Teese says she still visits Michigan occasionally. (Mackinac Island's Grand Hotel, she says, is "one of her favorite places on the planet.") Before our phone call is over, we have one last question — what's the best gift a man could get a woman for Valentine's Day? "Tickets to my show," Von Teese deadpans.

But then her tone softens, and suddenly Heather Sweet appears. "I just like doing fun things with my friends. Like, get us tickets for the roller rink, or let's go have a dinner, or let's plan things," she says. "I don't want people to spend money on things. Let's do things that matter that create experiences and moments. That's the kind of gift I would want to get from my boyfriend."

She deadpans again: "Or a big fat diamond. I mean, you know, we all do what we can, right?"