Courtesy of Ooze Ooze’s vape pens are also known for their portability.

It started with a pen.

Four years before Michigan would vote to legalize the recreational use of marijuana for adults, and just a year after Oxford Dictionaries declared "vape" the definitive word of 2014, a modest Michigan brand launched a line of personal vaporizer batteries under the name Ooze. The Slim Twist battery, the first of its kind due to its twist-on charging mechanism, was invented to universally accommodate the influx of cannabis and CBD concentrate cartridges that had flooded the market of surging smoking alternatives.

Needless to say, things have changed since then.

"If they had more space, we'd probably get that, too," Ooze's marketing director Eddie Koury says during a tour of Ooze wholesale headquarters in Oak Park. The company, which started with less than 2,000 square feet of space with owners Vince Ayar, Gjergj Sinishtaj, and brothers Dan and Steve Hannawa at the helm and fewer than five employees on payroll, is taking over the industrial complex they've called home since 2015, and will soon occupy nearly 45,000 square feet of warehouse and showroom space in the coming months.

"We're up to I think almost 50 employees now. It's about job creation, and that's been fun, too," Ayar says of the company's expansion, which started last year when Ooze entered the wholesale market, and will include "doubling or tripling" Ooze's marketing department, as well as partnering with other supply brands to offer a wide range of products beyond Ooze brand exclusives.

"That's the most satisfying thing for us as the owners is you see how passionate some people are about this industry, about the job," he says. "And to be able to give somebody a job that you know that they're going to love and enjoy ... I'm a firm believer [that] people will do what they love much better than if they do what they hate. Our structure is just different. It's run more like a family business than it is like a corporation."

Ooze wasn't always the Ooze it is today. Ayar credits fellow partner and Ooze co-owner Steve Hannawa for bringing e-cigarette technology to Michigan, as he had been invested in vape tech years before Juul pods and #VapeNation entered the cultural lexicon. The struggle was figuring out how to get in on Michigan's marijuana industry without opening dispensaries or operating grows, both of which had been subject to closures, fines, and fees under the previous administration's extreme regulation of Michigan's medical marijuana program. Ayar and his team eventually said "fuck it" and leaned on pushing the vape exclusively, which they already had access to, and came out with what remains their best-selling product to date: the Slim Twist battery. Thus Ooze was born.

In terms of its branding, Ooze products ooze the company's ethos of fun, function, interchangeability, and portability. From the rotating selection of collectible rolling trays (all of which boast trippy, dripping, psychedelic designs) to smoking necessities like papers, clips, and most recently a partnership with King Palm wraps (natural pre-rolled palm leaves with a corn husk filter, ready to fill with herb for a slow and safe smoke sesh), Ooze is quickly becoming a one-stop shop for experts and casual tokers alike, and has a distinct design aesthetic to back it up. One of its newest offerings, the silicone Slugger Dabbin Dugout — which, like all Ooze products, comes in a variety of colors and patterns — keeps your dab rig contained in a discreet, pocket-sized setup. The Ooze Silicone Kettle Bubbler is also a newer hot-ticket item for flower and concentrate lovers, as it accommodates both and features a no-slip suction design to avoid weed water spills. The brand's hand-sized silicone bubbler shaped like a saxophone is a testament to Ooze's playfulness.

"We want to play with people's personality, too," Ayar says of Ooze's product and package design, 75 percent of which is done in-house. "It's a more personal experience for the consumer." 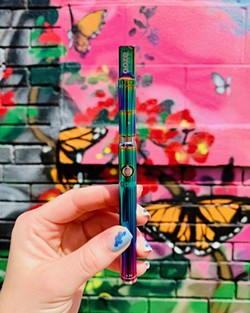 Product expansion is first on the minds of the Ooze team, but even more than that, it is product improvement. Ooze batteries, which now come in a variety of voltages, are protected with a lifetime warranty and, unlike some off-brand batteries, Ooze's technology wields a safety feature that allows the battery to stop charging once it has reached full charge. Ayar says, overall, Ooze quality has improved and, as a brand, he says they want to hear how they can do better.

"If we make a mistake, we go to the end of the world to make it right," he says. "I love all feedback. I encourage all feedback because if there is something that you don't like about our product, there's probably a thousand other people that don't like it. And if it's something we can change, let's change it."

One of the earliest complaints about Ooze batteries were, well, the batteries themselves. Ooze batteries are made in China, and Ayar says that even if you were to take a battery straight from the package, you might encounter a quality issue that is beyond Ooze's design or quality standards. Or it might have something to do with a particular cartridge, and battery issues might actually be a novice connection issue.

"The first pen was the best at the time. This pen is the best at the time, but of course in four years a lot has changed, but we just have to make sure we're on top of those changes," Ayar says. "Our biggest thing now is just noticing market trends. What are consumers enjoying, what are some new things that are coming out? It's about keeping our eyes peeled."

For instance, Ooze has latched onto the silicone trend, which has been made popular because it's easy to clean, it protects glass pieces from breaking, and lends itself to the interchangeability between products and replacement pieces as a means to extend product life. Though Ooze is forced to improve and expand in what feels like a saturated vaper's market, Ayar and Koury agree that Ooze's future success is less about expansion and more about changing the game.

"We have an engineering team starting to do more of the ... bigger projects," Ayar says. "I know a lot of what we've done right now [has] been a lot of design elements. Our next goal is to have a team to really come up with, like, a game-changing product. We have great product, [but] I don't feel like we have a game-changing product. Not yet. We just got to keep adapting and just keep moving and getting better."

If you're surprised to learn that Ooze is a Michigan brand, you're not alone. Ayar says they hear that a lot. Though all of Ooze's owners are Michigan natives (many of the company's shipping, receiving, marketing, and graphic design staff are also local), dodging the label of a Michigan brand was a strategic choice.

"To be honest with you, in the beginning we leaned on it a little bit," Ayar says. "We love our hometown, we love Michigan, but we also feel like as a brand, we have to do what's right for the brand and we don't want to be so focused on Michigan. We didn't want to be looked at like a small hometown brand like, hey look, we're a nationwide brand. That being said, we go to the Lions games and Tigers games with our Ooze gear all the time."

‘Nobody was really putting a brand behind this stuff. We knew the brand had to be fun.’ tweet this

"We all grew up here, you know, a lot of us are starting families now," Koury adds. "We don't want to leave. This is us. Like, we grew with it. This is where we live, and this is [what] we want to be a part of."

As of 2019, only 10 states in the U.S. still enforce the federal categorization of marijuana as an illegal Schedule 1 substance (weed shares this label with heroin, LSD, and ecstasy), while the remaining states have either decriminalized marijuana, legalized it entirely, or have a medical marijuana program in place. Though Michigan is a hotbed for marijuana entrepreneurs beyond dispensary ownership and grow operations — we've had a head start on many states, thanks to legalizing a medical program in 2008, and recreational use 10 years later — Ayar doesn't foresee an immediate trickle-down boom in the non-smoking public's interest in vaping or smoking, noting that he's "a firm believer that just because something is legal or illegal doesn't necessarily mean somebody's going to do it or not do it."

The transition for many might take a while. Vaping has created a new frontier, one that makes marijuana and CBD consumption more accessible to an entire generation of non-smokers who may have been turned off because of legality and social stigma. Both Ayar and Koury agree that vaping may replace the end-of-the-day "glass of wine" for a lot of people, and they seeing the tide slowly shifting.

While Ooze widens the footprint of its metro Detroit headquarters and looks to bring in additional staff to accommodate the company's growth, one question remains: Is Ooze a 420-friendly workplace? The answer: Sort of.

"Well, so when we first started the company, we had like 10 or 12 employees. We used to have barbecues every Friday, and we'd smoke a joint together. It was kind of like that. And then HR had to come in and ruin it," Ayar laughs. "We straightened up a little bit. Not everyone smokes here, so you gotta be fair to everybody. I'm not going to tell you I'm going to go in and if I catch someone with a pen, I'm gonna fire them. If you do it, do it discreetly." he says. "But after this interview, we'll go smoke a joint."