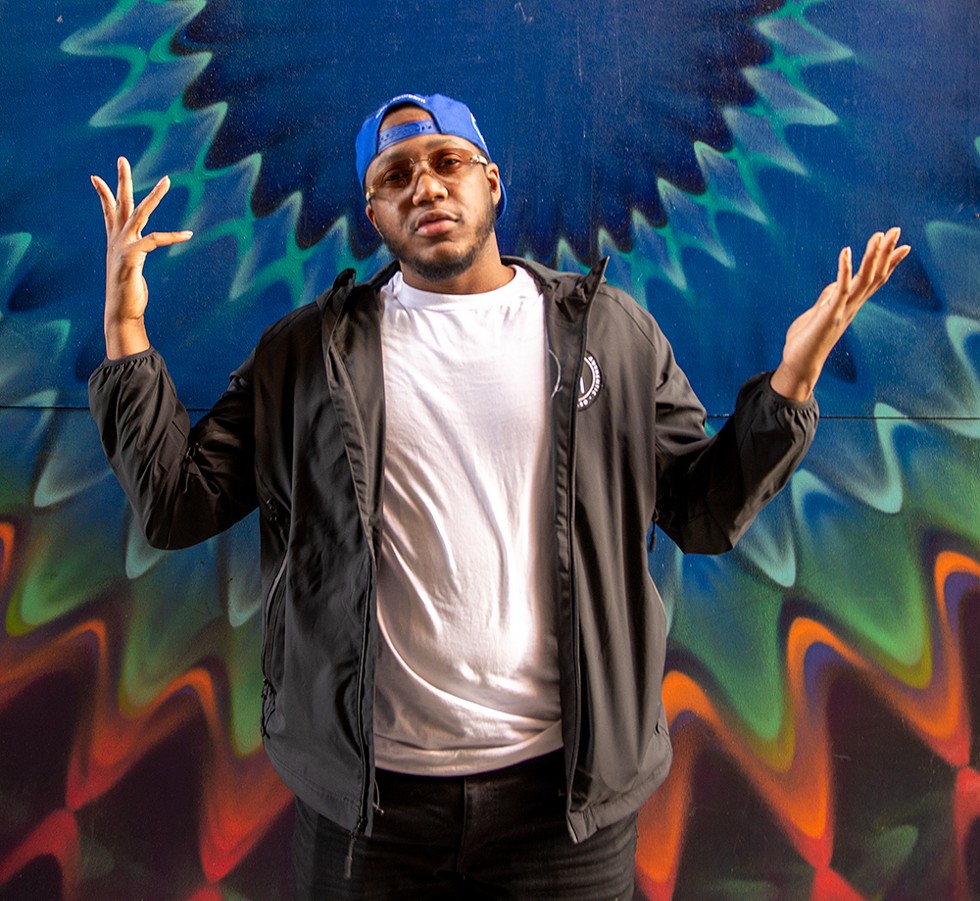 Detroit rapper Gmac Cash says it only took "about an hour" to write "Justice for Ahmaud" — an emotional two-minute-and-30-second track dedicated to Ahmaud Arbery, the unarmed Black man slain by two white men — one of whom was a retired law enforcement officer — while jogging in his Georgia neighborhood in February. The song, written and recorded last Thursday morning, followed the release of cellphone footage earlier in the week that revealed Arbery's final moments. The video sparked national outrage, petitions, and pleas for justice, which resulted in the arrest of his alleged killers that evening — a few hours after Cash's song dropped.

"I actually cried writing that song," Cash says. "Before I do a song, I read about it. I read about seven articles, watched about 10 to 20 videos on the situation, and it brought out a lot of emotion, a lot of tears."

Cash's "Justice for Ahmaud" is a powerful entry in the canon of rap songs detailing the disturbing realities of racial profiling, police brutality, lethal racism, and the danger of living life as a Black man in America.

"Thought about my mama when I seen that brother mama cry/ as a Black man, we sit and wonder like how I'mma die," Cash raps, his voice teetering between sorrow and rage. "First we gotta make it out the streets, like that ain't real enough/ Then we gotta worry about police because they killin' us."

The raw, ripped-from-the-headlines track follows on the heels of a very different offering from the 27-year-old rapper — and one that caught the attention of the highest office of the state and, well, just about everyone else in Michigan. Just five days before "Justice for Ahmaud" came "Big Gretch," a hilarious tribute to Michigan Governor Gretchen Whitmer, her decisive — and controversial — coronavirus pandemic response policies, and her new nickname, which had been bestowed upon her by Black Twitter.

The trending nickname spurred a meme that featured Big Gretch flashing a smile and a photoshopped pair of Cartier's C Décor white buffalo horn frames, or "Buffs" — a coveted status symbol in Detroit. One YouTube commenter suggested presenting Whitmer with a pair of Buffs as the Motor City equivalent of a "Medal of Honor," or the ultimate stamp of approval from those in the Detroit community in support of her efforts to keep Michiganders safe from a virus that has taken more than 4,500 lives across the state.

Cash, as evidenced by the lyrics on "Big Gretch," is among those who agree with the stay-at-home order, which has been extended three times since mid-March and has successfully begun to "flatten the curve" of COVID-19 cases and deaths.

"I agree with her about the stay home part because until we know what we're dealing with, I'm not 100% on going out right now," Cash says. "In my personal opinion, we're going to go out and everybody's going to get sick and we're gonna have to shut it down again."

In the track, Cash imagines presenting Whitmer with the Buffs, takes swipes at POTUS and the recent Lansing protests he encouraged ("All that protesting was irrelevant/ Big Gretch ain't trying to hear y'all or the president/ How we gon' take orders from a non-resident?/ Talking about 'It's safe,' but he ain't coming with the evidence"), and also formally invites Big Gretch to the cookout.

The track has more than 300,000 views on YouTube, thousands of reshares, and has garnered local and national attention, interviews, and some love from the song's namesake.

"This is too much," Whitmer posted on Twitter. "Love the nickname. Love the song. See ya at the cookout, GmacCash. Until then, Big Gretch says stay home and stay safe."

Though Cash says he loves the attention, he admits "it's weird."

"I haven't got to this level yet — this level's a huge level with the governor," he says. "Now I've got a lot of politicians in my inbox."

After the song began to do what a typical Cash song does best — go viral — the Big Gretch energy inspired yet another idea. What if Big Gretch actually got her Buffs? What if people started urging Cash to start a GoFundMe campaign to get Whitmer the Buffs she deserves? That's when Cash launched a GoFundMe with a goal of raising $2,500. In less than 24 hours, the campaign exceeded its goal by raising $2,950. It looked like Big Gretch would get her Buffs after all. 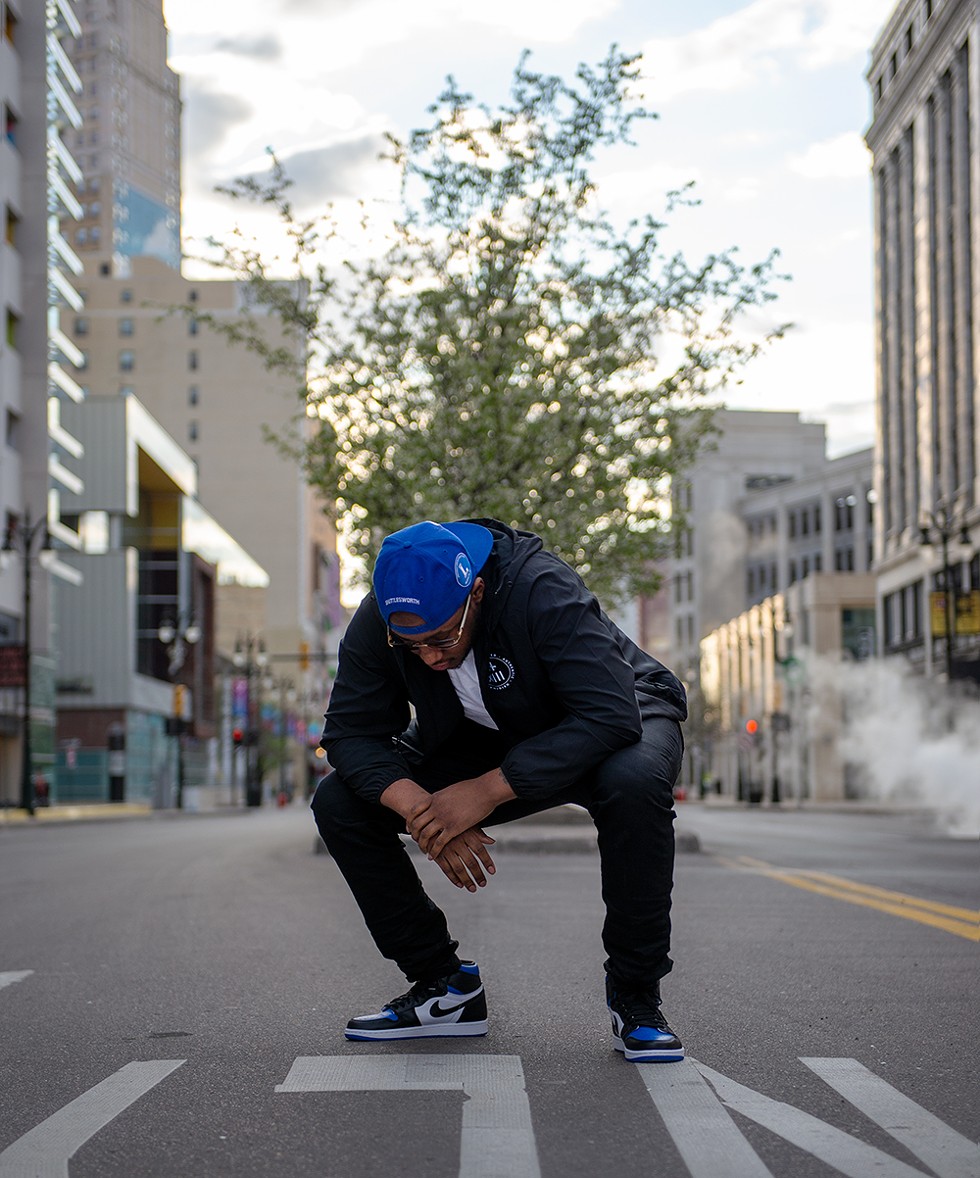 Well, not quite. Turns out Whitmer cannot receive gifts of more than $50, but Cash says he knew that going into it.

"I pretty much knew she couldn't take them, I know the laws," he says. "I just didn't want nobody else to raise the money and keep it. Cause I had a lot of comments saying like, 'If you don't do it, I'll do it and I'll buy me some.' I kind of took them seriously. I'm like, OK. I'll just start a GoFundMe so if she can't get them then I'll make sure the money goes to charity."

Though Whitmer said she was "grateful for the gesture to don a pair of iconic Buffs," she said she would prefer Cash to spend the money on the community. He has agreed to donate the funds to New Era, a Detroit nonprofit aimed at economically empowering Black Detroiters in need.

Going viral is nothing new for the Detroit-born and -raised rapper, who says he first started making music in elementary school. Hell, he last went viral in March for his video for "Coronavirus" — a hilarious public-service announcement about staying the fuck away from people to combat the spread of COVID-19. "If you got that CV, they gon' find you/ If you coughin', I ain't tryin' to be around you," Cash warns while in head-to-toe protective gear. "I ain't even tryin' to stand beside or behind you/ I'mma try to help them motherfuckers find you."

However, his first taste of viral attention came in 2016 when he parodied "First Day Out" by Detroit rapper Tee Grizzley. Cash turned Grizzley's song about getting out of jail into a love letter to a fast-food chicken chain with "First Day at Popeyes." For Cash, the choice to pivot from what he calls "serious" music to comedy tracks was a deliberate one, influenced by Eminem, Ludacris, and J. Cole, all rappers with a penchant for infusing their tracks with humor.

"So, basically, I said, How can I stand out? And the first thing was, be funny. Be funny, crack a joke in a song," he says. "So I said, 'I'm going to stick with it and I'm going to talk about more relatable things and I'm gonna crack a joke or two in every song and it's been working since then.'"

Seemingly no topics are left unturned by Cash, who says he receives somewhere between 100-500 direct messages a day from fans requesting that he cover various hot topics or pop-culture items. He says if he gets multiple requests for the same thing, he'll do it. But not everything is for public consumption. He tries to make a song a day, with only one released each week. He has a home studio in his basement on the east side, but says he oftentimes will sit in his car along the riverfront to flesh out rhymes.

Topics he's tackled so far include R. Kelly, Air Force Ones, asking passengers for gas money, snow, potholes, a Detroit Popeyes and its publicized cockroach infestation, paying bills, disapproving of Omari "Ghost" Hardwick kissing Beyoncé at the NAACP Awards, Trump's stimulus check, tracking the ETA of his weed man, tracking the ETA of the final cut of one of his videos, drag racing on the Lodge, the late Friday actor, John "Pops" Witherspoon, lemon pepper seasoning, and hating on Android phone users.

The viral attention, he says, has only come to bite him in the ass once — and it cost him his job. On 2018's "FMLA," Cash jokes about falsely cashing in his paid family and medical leave time to blow work off. At the time, Cash was a temporary-part-time worker at the Fiat-Chrysler stamping plant in Sterling Heights. At first, he was asked to take the song down. And then he was fired for filming outside of the plant, which was considered misuse of company property. Aside from a few sporadic temp jobs, the Chrysler plant gig was one of his last.

In 2019, he retaliated and stood in solidarity with the United Auto Workers' strike of General Motors with his track "On Strike." Cash says a lot of his family and friends are union workers, so the choice to take a stand was instinctual.

In the video, Cash grabs a picket sign and joins strikers, declaring, "We goin' on strike/ till they get this shit right."

Though Cash says he wasn't scared of fallout with "On Strike," he wished they would've helped him get his job back.

For Cash, making funny songs and videos comes from his love of being entertained. He says he doesn't flash money or jewelry like other rap stars because he wants the viewer to focus on his art, which goes far deeper than "parody rap," a label Cash says is false.

"I can rap for real," he says. "What I'm doing is making my own songs. These are my songs, they're not anybody else's songs. So they're not a parody. When people say it's parody, they don't take it as serious music. But basically, what everybody tells me is that I'm reinventing rap like, I'm making rap hip-hop again," Cash says. "As a rapper, you should be able to rap about everything, versus rapping about the same thing."

While Cash says he enjoys these viral bursts of attention from his rapidly growing collection of original songs, videos, parodies, and tribute tracks, he hopes the spotlight will become more sustainable and lead him to achieving one of his biggest goals of landing a record deal. But for now, he's happy to scroll through his timeline, sit by the water, and make the city laugh during a time when we need it most.

"It means a lot to me to be from here. There's something about Detroit, like we stand out wherever we go. Honestly, wherever I go, they know I'm from Detroit. I just live up to it to be from Detroit 'cause we get so much bad talk," he says. "I try and shine positivity and light on the city, like, it's actually fun here — it's cool to be from here."