"I got seasick on a ferry when we were on tour," he says. "It was one of the worst experiences of my life."

Leonard plays drums in Protomartyr, one of the most high-profile guitar acts to come out of Detroit in the past decade. His anti-boat stance is surprising considering his band's planned hometown record release show for its latest record, Relatives in Descent: On Sept. 22, the band will perform on the Detroit Princess Riverboat.

The band's aquatic ventures have not always been successful.

"I had been on a ferry before," frontman Joe Casey says. "I'm like, 'Ahh, this is going to be great. Guys, you're going to love it. It's going to be quick, and you can drink.'"

But then there was a storm. The ship's stabilizer busted, and the engine failed. What was supposed to be a two-hour tour ended up taking almost five hours.

"It ended up being just like in a movie, where it was shaking so much that the bottles are falling out of the bar, and you can hear an announcement like, 'Is there a doctor?'"

"Children were crying," says guitarist Greg Ahee. "They ran out of puke bags."

But when the band got the opportunity to celebrate its new record — its first on British indie Domino Records — with a gig on the Detroit Princess, they couldn't pass it up.

Of all the Detroit indie bands to rise to international prominence, Protomartyr might be among the most unlikely. The band eschews the theatricality and stylishness of the bands of the early 2000s garage rock boom, instead dressing in street clothes. The music is cold and foreboding, and Casey is an unassuming frontman, known for his stoic delivery.

On a rainy day during Austin, Texas' SXSW festival in 2014, the band played to a near-empty room of some 20 people. Fortunately, one of those was noted music critic Greg Kot, host of Chicago Public Radio's nationally syndicated program Sound Opinions alongside Lester Bangs biographer Jim DeRogatis.

Following live appearances on Portland's KEXP and Sound Opinions in 2014 ("It's almost like he's the guy at the end of the bar talking as much as singing," Kot said of Casey; Sound Opinions would later regularly feature music from Protomartyr as interstitials), the band continued to build momentum, earning a glowing review of its third album The Agent Intellect by the likes of Kot and DeRogatis, a spot on NPR's Tiny Desk Concert series, and later a performance at 2015's Pitchfork Music Festival. 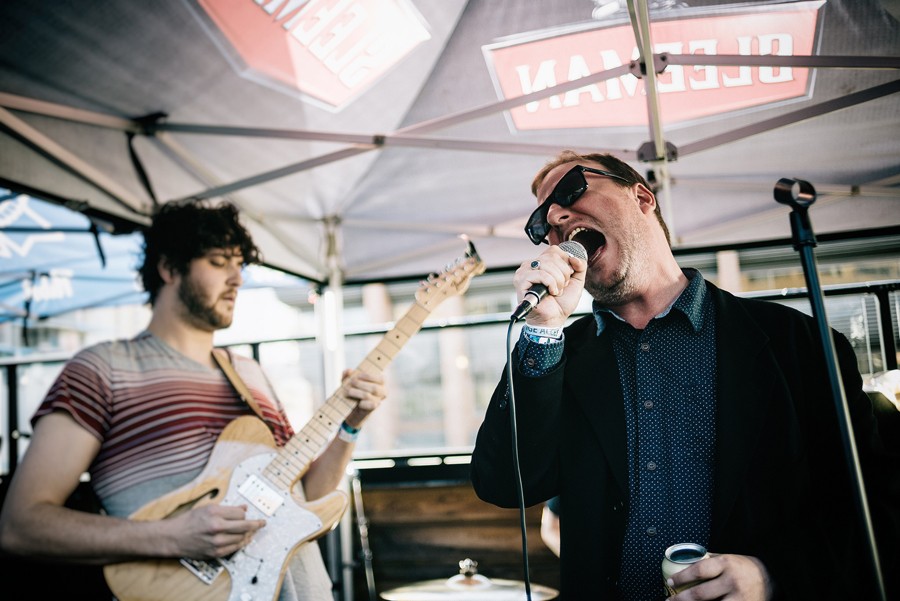 The band's sound has been likened to post-punk acts like the Fall, Joy Division, and the band's unanimous favorite, Wire. Indeed, there is something about the marriage of Ahee's alternating reverb- or fuzz- laden guitar with Leonard and bass player Scott Davidson's aggressive, unmistakably punk rock rhythm section that calls to mind the sound and production of many great albums from the period. Singer Casey's delivery is reminiscent of Joy Division's Ian Curtis.

But it's a comparison the band has grown somewhat tired of, and guitarist Ahee insists it is unintentional.

"It's always been weird to me, the way people refer to us as 'revivalist,'" he says. "I've never viewed us like that. I never would have called us 'post-punk' if people didn't just label us that at some point. And that was definitely never a conscious decision."

Lazy journalism? Perhaps. But Casey thinks it could be more about a lack of a way to describe the type of music they make.

"The Fall had 70-plus members, and however many records," he says. "They sound completely different than they did from their first record. I think it's more [that] you wind up sounding 'post-punk' when you want to make loud aggressive music but you don't want to fall into genre traps of, 'OK, we have to have it sound like a punk song, so it's gotta have like, a certain guitar sound.' Like you're trying to experiment with a form, and so that kind of gets lumped as post-punk.

"I think sometimes bands like us ... get jumbled in with that, where it feels like everyone's just doing this because it's a scene," Ahee says. "But when we started off it didn't feel like a scene, it definitely didn't feel like a post-punk revival scene."

But still, it could be that bands like Protomartyr share a bit of musical DNA with some of the great post-punk bands. Detroit and Manchester have enjoyed the status of unofficial sister-cities for some time. (To this day, if you visit record stores in Manchester suburbs like Rochdale or Salford, you can still pick up soul or R&B singles from the Motown era which were never released in the U.S. — exported to the British Isles exclusively for fans of the "Northern Soul" movement.) But in support of Ahee's point, many of the Manchester bands that Protomartyr frequently invite comparison to — like Joy Division or the Fall — share little in common with a fellow Manchester band like the Smiths other than the fact that they all sound pretty bummed out, a trait that could not unfairly be attributed to a vitamin D deficiency.

So this is a band that, to a large extent, thrives on darkness. But to record Relatives in Descent, Protomartyr took a different approach. Instead, they traveled to sunny Los Angeles to record with Sonny DiPerri — better known for his work with poppier, experimental acts like Animal Collective and Dirty Projectors.

"I was telling somebody that I was really hoping it would be, you know, I was kind of picturing a Bob Seger 'Hollywood Nights' type of thing, that we'd be wined and dined and corrupted by Los Angeles," says Casey. "We tried to, but it didn't work."

"When we did the last album, Agent Intellect, I think we recorded in February," says Ahee. "It was really cold and there was a snowstorm. I remember for three days probably at least we didn't leave the studio, like I didn't go outside. So for this record we all stepped outside at least a few times a day."

Fortunately for fans of the band, the sunshine did Protomartyr no good.

The band says originally, they set out to cover different territory than their first three albums. But they soon found themselves immersed in the bizarre and paranoid mood that gripped much of the country for the past two years.

"The basic idea for me with the lyrics was originally I was going to try to be more esoteric ... different kinds of moods than previous records," Casey says. "But the way the world was turning kind of made me feel like I had to stick with what I had been doing. So it affected the record for sure."

The band started working on songs late last year. "We were on tour during the election, we actually played Las Vegas for the first time ever on the night of the election so that was very surreal," Casey says. "The kids that were at the show didn't seem like it bothered them. They were happy because Nevada just legalized marijuana. So they were happy for that. But there were also people crying there during the show."

"Like me in the green room," Ahee says. "Just head down the entire time."

The song "A Private Understanding" serves the lead single and video for Relatives in Descent, as well as the first track on the album. Even for a band that trades mainly in abrasive, aggressive sounds and moody atmospherics, it is perhaps the most uncomfortable on the entire album.

Indeed, for a band who has openly professed an affinity for Top 40 artists, they seem unconcerned with injecting any kind of commercial sensibility into their own music.

Instead, Protomartyr prefers to defy expectations.

"Somebody — I think it might have been a negative review — said, 'Oh, Protomartyr builds up tension but never releases it,'" says Casey. "And I can kind of see that. That we kind of turn the screws."

"I think people want a big booming chorus," Ahee says. "And that's release to them. To me that just feels..."

"Very cheap 'stock,' in the words of Lars Ulrich," Ahee says. "But I'd rather do it in more nuanced ways. I'm more interested by something that might not go in the direction you think it's going to go. So sometimes for us that does mean a big pounding chorus, because we don't do that too often."

"That's how you make your money. And we don't want money," Casey says, and then laughs.

The members of Protomartyr frequently disagree over music (Wire, it seems, is the sole exception), and after our conversation the only clear impression is that Protomartyr are lifers in the world of music nerd-dom. During our interview they discuss writer DeRogatis' new revelations about R. Kelly's alleged "cult," their first concerts (Leonard's was Green Day, Ahee's was Alkaline Trio, and Casey's was Steve Miller Band), and their take on Brian Wilson's farewell Pet Sounds tour. They point out a nod to David Bowie ("Don't lean on me man") in Casey's lyrics from "My Children" from Relatives in Descent.

But for a group of people with such a formidable knowledge of and obsessive interest in popular music — who have been embraced by the rock critic intelligentsia — Protomartyr has a decidedly low-brow approach to creating music.

"In some ways in my mind music should feel kind of like, stupid," Ahee says. "It should move you in a way where you don't use your brain. So it feels counterintuitive to try and intellectualize it."

Weeks after meeting with the band, I find myself listening to a rebroadcast of Terry Gross' 1988 interview with Joey Ramone on Fresh Air. The Ramones are described in the same breath as both radically inventive and as a throwback act, and it strikes me that maybe people have been having similar conversations since guitar music first found a popular audience, or maybe since critics have been discussing music. Maybe every guitar-based band inevitably draws comparisons to every guitar-based band that has come before it. (When asked "Beatles or Stones?", Casey deadpans again: "Neither.")