How to be a fan of the Detroit Lions, one of the worst teams in the NFL 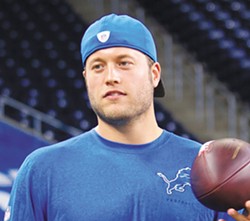 Two guys from Michigan die and go to hell. They don't mind it too much — it's a nice change of pace from the winter weather they were experiencing at the time. The Devil, bothered by their jubilance, decides to turn the heat up. It doesn't work; they're still enjoying their barbecue. The Devil keeps turning the heat up, but they keep having fun. So finally, he decides to turn it down to subzero. When he checks on the Michiganders, they are leaping with excitement.

"Hell froze over," they say. "The Lions finally won the Super Bowl!"

I've heard some variation of that joke several times throughout my life, but the punchline remains the same.

The point of the joke is that even with the knowledge that this team has been hopelessly depressing for half a century, you can still get excited and have fun with it too.

Where to begin? To newbies, it can seem utterly incomprehensible. But football in my estimation is the sport that welcomes the widest range of fan investment. By I mean that it's simple enough to follow that you can have it as something in the background while friends or family are over, or it's something that you can follow in-depth and understand every minute detail of. It really is like a game of hyper-athletic human chess. The stop-start play of football makes it the perfect sport for a culture rife with distractions and busy days. With football, you always know when the action is occurring and when it isn't, meaning you can comfortably go to the bathroom, grab a drink, check your phone, etc.

And while you're checking your phone, you can indulge in some glorious memes, which the NFL fandom produces some of the best of. Perhaps the team that leads the NFL's meme economy is our very own Detroit Lions, whose sub-Reddit was voted the best by the denizens of Reddit's NFL board. Lions star quarterback Matthew Stafford (who has made the transition from "Frat Stafford" to "Matthew Dadford" this offseason) was the star of the season's most iconic meme, referring to the Lions' propensity for late game comebacks.

This season promises many changes for the Lions (something longtime fans may say "heard that one before," but shush we're being optimistic here), which makes it a pretty good jumping on point for newbies. Think of it as the reboot of a long-running show. A new head coach and several other on- and-off field additions many changes.

There are some narratives from past seasons that are important to know. The biggest point of concern for the Lions of recent years has been their struggles with generating a running game. In there are generally two types of offensive plays: a passing play and a running play. The first is where the quarterback will step back and attempt to throw the ball to one of his receivers, and the second is where the quarterback will hand it to his running back (or in some instances just run with the ball himself) in an attempt to make it down the field that way.

The two types of attack play off each other, as consistent passing success will stretch the defense out, allowing for more running plays, and successful running plays will bring the defense together, allowing for more passing plays. Having both working well together makes it hard for the defense to zero in on one kind of attack. Additionally, running plays are generally considered "safer" than passing plays, as the likelihood of the ball turned over is much slimmer (old-time football fans used to call passing the ball "a fumble in the air").

In further proof that the football gods are vengeful ones of the Greek variety, the Lions had arguably the greatest running back of all time in the '90s, the great Barry Sanders, whose highlights are awe-inspiring to even the biggest football hater. The Lions' failure to secure the legend a championship may be the reason why we are condemned to never have a great running offense again, with the last few seasons being particularly brutal, ranking dead last in rushing yards among all teams.

However, the Lions have made some additions to their running core this offseason, the most exciting of which is rookie Kerryon Johnson, who many analysts have pegged as a potential breakout star for the team this year. The addition of veteran running back LeGarrette Blount should also add some reliability to the run game.

Also of importance for any prospective Lions fan is to know your enemy. The NFL divides its 32 teams into two conferences: the NFC and AFC (inspired by the way the NFL and AFL used to be genuinely separate leagues before a merger that gave us the Super Bowl as a championship), and each conference is divided into four divisions, made up of four teams. Scheduling in the NFL consists of playing against your division opponents twice a year, once at home and once away. At least one team from each division will make the playoffs, based on "winning their division" (something the Lions haven't done in decades), and then two teams from each conference will make what called Wild Card spots.

The Detroit Lions occupy the NFC North, and in order of how much you should hate them from least to most, their rivals are the Minnesota Vikings, the Chicago Bears, and the Green Bay Packers. The NFC North promises to be a competitive one this season, with the Vikings expected to continue their recent success from last year, the Bears expected to improve massively, and the Packers always being competitive if they have the best quarterback in the league and the beguiling devil of Lions fans everywhere, Aaron Rodgers.

Rodgers has given many Lions fans nightmares in the past, but recent injuries and team chemistry concerns his and the Packers' dominance over the NFC North may be nearing its end. The Vikings are the clear favorites to win it this year based off last season's success and their offseason moves, but it's worth noting that despite their success, the Lions managed to go 1-1 against them last year, showing the gap is closer than it may be perceived. After decades of Packer dominance, the NFC North could truly be anyone's division this year.

Ultimately, the feel of the Lions as they stand now is that they have something to prove. Ten years ago, the team went 0-16, the first time in NFL history since the inception of the 16-game season that a team failed to win a single game. None of the players from that team remain, and most of the front office has changed from that time as well. The reputation of the Lions in the last five decades as a team that can't get it done is one that can only be shaken one way: by winning. The Lions are led by one of the league's best quarterbacks in Matthew Stafford, and have stars at other positions too, such as wide receiver Golden Tate (he catches things) and cornerback Darius Slay (he stops opponents from catching things, sometimes by catching their things), but their legacies on the team will always be defined by whether they can help turn the unfortunate losing tide of the team's history. It is worth noting that having made the playoffs two of the last three seasons, the Lions are more successful recently than they have been in more than 15 years.

If your ass is starting to feel the sensation of smoke being blown up it, don't worry; I'm not attempting to engage in the act of delusion here. The likelihood that the Lions are winning the Super Bowl this year, or next, is incalculably slim. But there is still plenty of fun to be had along the way. Sports at their best are communities coming together in the name of competitive fun. Only one team can win the championship a year, 32 teams' fanbases don't go into the season believing they are walking out champions, so you don't have to either. And hey, you just might get to say you were a part of it when hell freezes over.