How to Dress Well's Tom Krell keeps it complicated 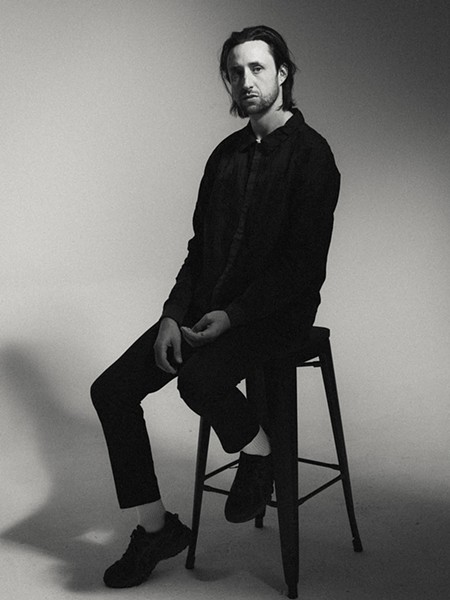 Saying yes is admittedly difficult for singer-producer Tom Krell, who is both celebrating a personal competitive basketball victory and openly resenting the fact that Pitchfork indirectly drew comparisons between his latest record under the moniker How to Dress Well to rapper Post Malone, using words like "white guys," "dirtbag tenderness," and "cool."

The Anteroom asks a lot of the 34-year-old, and at the same time the record provides a lot of answers. The album — which paints earth as a vacant boat, humans as animals, and describes souls as being in decline — is a lesson in self-flagellation. In conversation, Krell cites the late performance artist Chris Burden's "Shoot" from 1971 (in which Burden was purposefully shot with a .22 rifle to demonstrate the desensitization of audiences) and the three-month confrontational performance by Marina Abramovi titled "The Artist Is Present" (in which audience members could share a moment of silence seated directly across from the artist, staring into her eyes) as source material for the physical and emotional demand required to pull off his most ambitious tour to date.

Krell discusses collective complacency, the sustainability of being an artist, and why he refuses to go down with the ship.

Metro Times: Congrats on the basketball win. Between basketball and touring, there's quite a bit of physical demand there —

Tom Krell: Intensely so. But more than that, the performance I'm doing has an intense psychological demand on me. It's like engaging in an active self-exposure and engaging this public active intimacy that is not psychologically cheap, you know? A lot of pop music is meant to dehumanize the artist — the artist is meant to be some kind of demigod or someone who's not the public. And what I try to do in my performance space is really show that there's actually a community which obtains amongst performer an audience member, bartender, [and] everyone who's in the same room in the same place engaging in this act together, and I try to really highlight that.

MT: As a performer, is that sustainable or is the focus driven by necessity?

Krell: I mean, the payback is massive, too. So, when I connect with people through the work it pays itself back for whatever hundredfold. I don't know if it's sustainable or unsustainable. I mean, you know, I don't really think anything else is worth my time or energy so I wouldn't do, like, a lightweight version of the show. I tried to do something when we were in Oslo a few weeks ago. I was really tired and I was like, 'OK, I'm going to take this one part out of the set because I still think if I take it down to my 60 percent, I still think it's a powerful show.' And then I get on stage and I'm like, 'Why would I do that?' This is a show that I've thought so much about and put so much energy into, and I ended up doing one of the best shows of the whole tour because of it. The show is what makes the demand.

MT: Do you view the performance as a continuation of the record?

Krell: Yeah, for sure. The performance is doing something that the record can't do because the record is never going to be a literal person standing right in front of you, so there's a different set of demands on the live show and for the performer and the listener. I think that the values of the record and the live show fit together, carry each other. The process was super psychologically intense. I mean, I guess this is what I'm into.

I think that we live in a situation where we're constantly exposed to absolute mediocracy and emotional neutrality, and even things which are supposed to be, or essentially should be, really stirring to us, they're like more or less mildly irritating. You know, like Trump does some new absolutely mind-bendlingly racist and evil shit, and it doesn't even strike us to our core, it's just another irritation — another day with another little fucking minor, mid-level irritation. Yeah, so I definitely try to do something more robust and substantial. Which comes at a personal cost, obviously.

MT: You told Spin that you wanted to "cash in" on a pop record when you set out to make 2016's Care because you have people in your life that are financially dependant on you. Has that informed your concept of success with The Anteroom?

Krell: I don't know, I mean I guess there's a lot of different measures of success. Kind of depends on what kind of mood I'm in, and what kind of bills I have to pay, and where I am in the world. I still feel that my last record has some of my most powerful and beautiful songs I've ever made. I think that a song like "Salt Song" is something that I'll die by, and "Made a Lifetime" I would die by. I think that record is a success. I've been doing this for a while now... you look back and you're like "that actually didn't sell" or you're like "I need this website to like this record" or "I haven't made this." It's like, wow, I had a really amazing conversation with this journalist at this small publication and I actually learned a lot about my work, something I'll think about for decades.

I did a big piece yesterday where I was on set with probably about 20 people working, two photographers, you know, cinematographer, camera operators, journalists, massive corporate sponsors. And I was sitting in a chair answering some questions when it occurred to me, everyone on this set is being paid except me. So, this is the thing — yesterday was one of those things where like I think eight years ago I would have been like, 'Fuck yeah, this is the shit.' Like, people are paying attention. And now I'm like, I don't know, I probably could have driven Uber for five hours and made more money than I will from this multibillion dollar company's content, using my body as a material resource.

MT: Is a lot of your struggle learning to say no?

Krell: Learning to say yes to things. I mean, I'm exceedingly good at saying no to things. My press representative has to be like, "Hey, come on, this is cheesy but let's do this, it's a good look, and maybe in the future, they'll sponsor some art installation for you." I'm like, OK, fine, fuck it. Everyone was mad nice yesterday. The journalist was a super charming and impressive person and I think I'll probably hang out with him, he seemed like a literal friend. So, it's like, I just keep moving through. It is a crying shame that we've lost independent music coverage. That was helpful. It's difficult to find a path that doesn't involve compromise. You just keep making the work you want to make.

MT: What kind of work do you want to make?

Krell: If the world is dying then I don't want to be the fucking band on the Titanic. I don't want to play the beautiful songs while the ship is sinking. I want to be a signal to attempt to make plain how evil the world is. That's the work I'm making right now. I think one of the things people haven't recognized about this record — I'm not really writing about romantic love as much as I used to, even though romantic love is a major feature of life. The record is about more variegated and broad things. Maybe the next time I make a record I'll have a baby or something and do like 12 lullabies.

MT: The Anteroom is more about self-intimacy. In a lot of ways, I would imagine that is more difficult to write about.

Local Music How to Dress Well The Schvitz Detroit Video