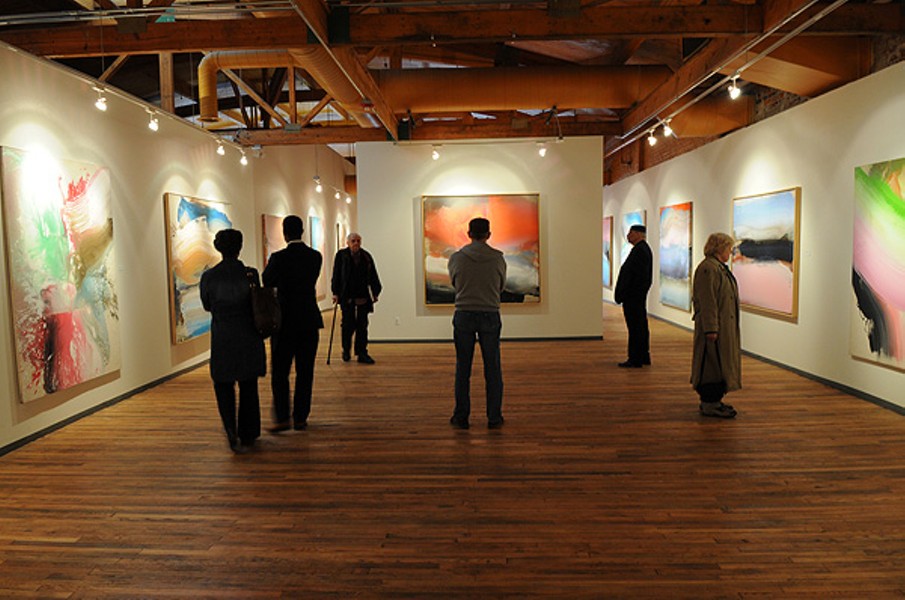 Detroit's reputation as an art capital has been rising steadily, perhaps cemented in the eyes of the national media by the recent decision of the famous Brooklyn-based Galapagos Art Space to up and move here. Of course, Detroit has a long history of great art — from the world-class art and architecture amassed by industry barons during Detroit's boom years to the up-and-coming artists attracted to 21st century Detroit's ample space and cheap rent.

That's why we think you could easily spend an entire 24 hours taking in Detroit's art — in fact, we dare you to. Sure, you could just spend the entire day at the DIA (you could probably spend a solid week there, at least), but that'd be too easy. Here's our suggestions for how to do it.

With the solitude afforded by the break of day, you might want to seize the opportunity to enjoy some of Detroit's public art. Dabls' African Bead Gallery and MBAD Museum is one such jewel. The project started almost 15 years ago when bead collector Dabls Olayami tried to create a museum dedicated to the craft. Structural problems caused him to put those plans on hold, so in the meantime he created this sprawling, outdoor found object art exhibit called "Iron Teaching Rocks How to Rust," a metaphor for race in America — arranging a guided tour from Dabls himself to walk you through it is highly encouraged.

While you're out exploring Detroit's art, you might as well run some errands while you're at it — fortunately, you can take care of all your recycling needs and treat yourself to some great eye candy at Recycle Here. Founded in 2005, this recycling center fashions itself as a community gathering space by featuring contemporary Detroit art — you'll find paintings from the likes of Carl Oxley, Robert Sestok, and many more on its walls — and they even host occasional musical performances as well. In 2011, the adjacent Lincoln Street Art Park opened, which carries the ethos of Recycle Here outdoors where you'll find a number of found-object sculptures. It's not that far of a stretch, really — reusing materials and creating art goes hand in hand, right?

At this point, you'll probably have worked up an appetite. No problem — Detroit has plenty of places where you can refuel and still enjoy top-notch visual art as well. Trinosophes is a performance space and café that has your standard-issue coffeehouse fare — coffee, tea, food, and Wi-Fi. The menu changes seasonally, and the space also features an exhibition gallery, a museum, a library, a branch of Peoples Record Store, and even an installation called "The Mental Machine," a tribute to the groundbreaking Detroit DJ Electrifying Mojo (you have to see it to believe it).

Another solid, arty dining destination is Cass Café, a spacious eatery that always has plenty of local beers on tap, an inventive menu, and always hosts exhibitions of local art on its walls. There's also Eastern Market, a historic destination for finding fine food, but also a more recent destination for top-notch murals from some of the biggest names in the international contemporary street art scene.