Sight yourself a sasquatch this summer season. 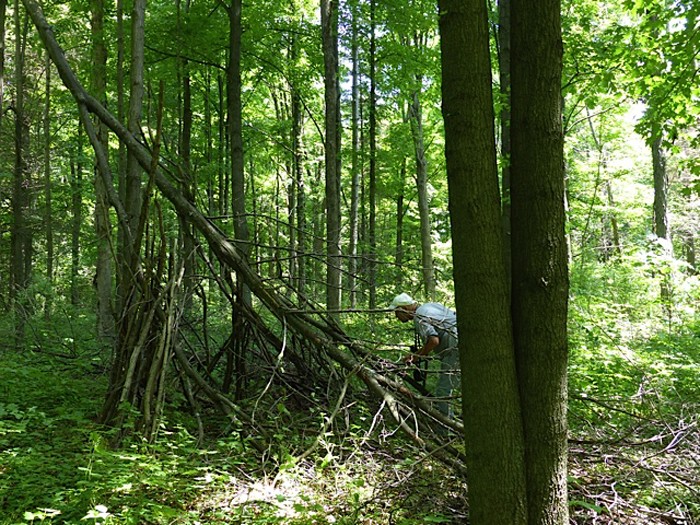 Yeti, sasquatch, bigfoot: Sightings of a large, hairy man-like creature have been reported for hundreds of years on the North American continent and around the world. The Sherpa people, indigenous to Nepal, coined “Yeti,” a word that comes from a colloquial term meaning “that there thing” while the Canadians prefer the word “sasquatch,” and Americans like the simple and explanatory “Bigfoot.” Call them what you will, these cryptid hominids have been sighted and reported on since before Columbus set foot in the Americas — yet, to this day, definitive evidence of these creatures remains to be seen.

With dense forested areas, swamps, vast farmlands, and access to plenty of fresh water, Michigan seems an ideal and idyllic setting for a bigfoot. He and his ilk have been seen as far north as the Upper Peninsula and as far south as Monroe County, with new occurrences happening regularly.

Far and away, Oscoda County has the most bigfoot sightings on record in Michigan. Starting in 1976 when a child saw a “6 to 7 foot bigfoot near the Mio Dam” while walking home from school, the bigfoot sightings have since increased, with most occurring near Mio. Jackson County comes in at a close second, with incidents occurring in a concentrated block from 2000 to 2005. Washtenaw County isn’t far behind Jackson’s count; sightings have been happening regularly since 1957.

There’s some debate as to whether or not bigfoot are dangerous. While some researchers paint the creature as a bloodthirsty being that seeks the flesh of women and children; others have reported that sasquatch are generally kind creatures who’ve shown as much curiosity toward humans as we have toward them.

We’ve heard of a Bigfoot Bash happening in Comins, Mich., July 25-26. Events like that could provide a chance for Michiganders to meet and commune with both experts and believers if a giant hunt is taking place. But for the average-to-novice sasquatch searcher, we put together a short list of things to look for.

• Plastic bags (if you wish to collect specimens)

More than just tracks: Sure, oversized, human-like tracks seem like a sure sign that a bigfoot is in the area, but there are other indicators that a bi-pedal hominid is in the area. Trees bent at odd angles from high up, branches bunched together in teepee-like structures, and entire trees, roots and all, lifted out of the ground and turned upside-are all signs that a bigfoot is marking his territory, warning others to stay out. While weather can often snap small and even medium-sized trees in half, it’s also important to note the ways in which trees are snapped or moved. Many times it is in an unnatural way. And if many trees are snapped in a concentrated area, pay attention to the direction in which they’re snapped, especially if they’re all pointing the same way.

Sas-squatters: Much like people, a bigfoot likes shelter from the elements. When he comes upon an abandoned structure like an old barn or shed, he might take up residence inside. Be sure to check these dwellings for human-like feces, tracks, and animal bones. But be careful. Would you want someone checking out the interior of your home without permission?

Your nose knows: It’s important to note that plenty of “sightings” are actually more like “smellings.” Folks have reported an odor akin to dirty diapers, one that becomes heavily concentrated and can cause gagging. Some speculate that this odor is a pheromone emitted by a bigfoot, one that can be turned on and off at will, either as a fear mechanism or one that, on a very primal level, warns visitors to stay away. Keep your nose peeled and be wary. If you come across a lingering and stifling smell of smegma, it’s likely you could be very near a bigfoot, but he wants you to keep your distance.

Shhhhhh: Similar to smell encounters, many reported bigfoot encounters are simply people hearing strange noises that cannot otherwise be attributed to people or animals. Screeches, screams, grunting, and howling have all been reported as rendezvous with bigfoot. Keep your ears up.

Research the area: Have there been bigfoot sightings in this particular location? How long ago? What time of day were the sightings? Quite often sightings happen repeatedly in a concentrated area, and knowing all these facts will help you get the most out of your hunting.

Be Aware of the Risks: Like we said, many people have reported bigfoot to be vicious and violent. An early report detailing a sighting of the “Monroe Monster” notes that the creature grabbed the hair of a 16-year-old girl, bashing her head against the interior of the stalled-out car she sat in. She was reportedly knocked unconscious, having several large and visible bruises and contusions on her face. Her mother, who was in the vehicle with her, screamed for help and the creature retreated when a mob of nearby neighbors came to investigate.

Don’t go alone: Sure, odds are that you’re not going to see a bigfoot; however, it never hurts to have a buddy — just in case shit gets real.