Climate chaos rears its head even as pols look away 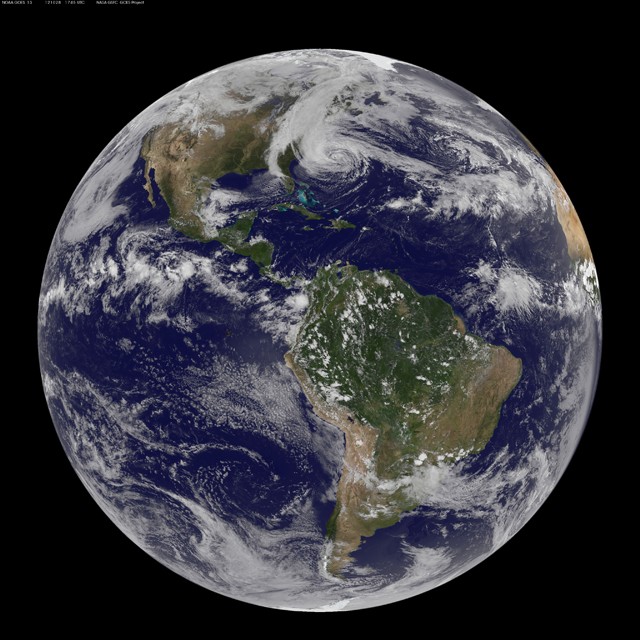 Leading up to the just-completed presidential election, President Barack Obama and challenger Mitt Romney engaged in three prime-time debates that lasted about 90 minutes each.

In addition, VP Joe Biden and Rep. Paul Ryan squared off in their own confrontation, bringing the total to about six hours' worth of debate between the men who want to lead this country for the next four years.

In all that give-and-take over what are supposed to be the most important issues facing this country, how much time was spent discussing the issue of climate change and what, if anything, America should be doing to address it?

We didn't have a stopwatch going, but a fairly good estimate is: Absolutely zero.

There was time for Mitt to talk about the need to cut off Big Bird's government funding, but not a second to spare for discussion of a subject that could end up becoming the defining issue of our lifetime.

The president, likewise, has largely remained AWOL on this vital issue during the long campaign.

In terms of presidential politics, we are actually going backward as the problem grows, becoming both more intense and more undeniable.

Obama, at least, has been consistent in saying that global warming is not a "hoax" and that measures must be taken to address it. However, having failed to make any significant progress during his first term (thanks in large part to resistance from congressional Republicans) he's been largely mum about the threat of global warming and plans to deal with it during the just-completed campaign.

For his part, Romney has been true to form and come down on different sides of the issue. According to Pro Publica, he said in October 2011, "We don't know what's causing climate change on this planet. And the idea of spending trillions and trillions of dollars to try to reduce CO2 emissions is not the right course for us."

His tune changed this past September, when he wrote that he believed "the world is getting warmer," and "human activity contributes to that warming" but that there was no clear scientific consensus regarding the extent of the problem. He did, however, stay with the claim that trying to reduce carbon emissions is too costly and would stifle economic growth.

Now, following the devastation of what's been dubbed Superstorm Sandy, we are seeing firsthand the costs — in terms of lives lost, property destroyed, and crippled commerce — and just how important this issue is to all of us.

Can it be said with certainty that Hurricane Sandy is the result of global warming?

"We can't say that steroids caused any one home run by Barry Bonds," Pooley wrote, "but steroids sure helped him hit more and hit them farther. Now we have weather on steroids."

But just as Major League Baseball's honchos long turned a blind eye toward the steroid use that threatened to completely undermine the integrity of the game, this presidential campaign season brought us candidates who were unwilling to put front and center a problem that is only going to become more severe if nothing serious is done to address it.

In one sense, this presidential contest represented a major step backward when it comes to discussion of climate change and the steps needed to seriously address it.

As Jamie Rappaport Clark, president and CEO of Defenders of Wildlife, notes in a Huffington Post blog, "... this year was the first time since 1984 that climate change was not even mentioned in the presidential debates. And while climate silence reigns, the planet warms. Year after year, extreme weather slams communities and wildlife habitats across the globe. Since 1980, the number of extreme weather events in the United States has steadily increased. Our economy, strained by the recession, must also shoulder the burden of rescue, repair and insurance costs, not to mention lost revenue from extended business closures."

Adds Clark, in a piece headlined "Hurricane Sandy and the Cost of Climate Silence":

"Opponents of climate change action often cite the cost of breaking our addiction to fossil fuels. But if left unaddressed, climate change only promises to be a bigger budget-buster down the road. It's not like Hurricane Sandy was the first weather disaster this year. The 2012 drought that had the U.S. in a stranglehold this summer has increased the price of corn and beef, and pork, poultry and milk prices are expected to rise as well. Already the drought has cost the U.S. economy $12 billion.

"The western United States also suffered through an onslaught of wildfires this summer: Over 3.6 million acres were burned in August alone. In Colorado, the wildfires this summer have caused an estimated $450 million in personal property damage so far. Our national forests and refuges suffered damage as well: The Little Sand Fire burned nearly 25,000 acres of land in the San Juan National Forest in southern Colorado."

Also mounting is evidence of just how severe the problem has become, and why it is only likely to accelerate if concerted action isn't taken quickly.

A September editorial in The Washington Post did a good job of explaining exactly what's going on:

"The Arctic is getting warmer faster than almost anywhere else on Earth. The latest evidence came in an announcement from the University of Colorado's National Snow and Ice Data Center saying that, as of Aug. 26, the Arctic sea ice cover shrunk to 1.58 million square miles this summer, the smallest area since satellite measurements began in 1979. ...

"Over the past three decades, the average extent of the Arctic sea ice has declined by 25 to 30 percent, and the rate of decline is accelerating. In the past, older, thicker ice would drift away and be replaced by seasonal ice. But now more of the older ice is melting in the Arctic, a phenomenon that had been relatively rare. Also, less seasonal ice is replacing it."

What's even more unnerving is something scientists refer to as the "feedback effect," which is associated with this change.

As the Arctic ice cap recedes, more water is exposed. Instead of sunlight being reflected off of that ice, it is absorbed by greater expanses of ocean water, thereby accelerating the warming process.

"The implications of this are profound," the Post's editorial board warns, " not only as an indicator of global climate change but also of changes in sea levels, freshwater, the Earth's energy balance, the biosphere and the livelihoods of millions of people.

"Climate change is happening, yet humans have been terribly slow to curb fossil fuels that emit greenhouse gases and cause the atmosphere to warm. The United States, caught in political gridlock and lacking consensus on the global-warming threat, has failed to take the lead. The latest reports of the shrinking Arctic ice should shock Congress and the president into more aggressive action, but both branches of government have been timid in the face of one of the great challenges of our age — and one that will haunt future generations."

Those who try to deny that man is responsible for rising temperatures and extreme weather benefit when doubt is sown. The last thing the fossil fuel industry wants to see is certainty regarding global warming, and so big coal and oil (and their proxies at so-called think tanks and the like) do their best to promote the idea that what's going on is the result of some natural cycle of planetary cooling and heating.

But that doesn't mean the abundance of greenhouse gases man has been pumping into the atmosphere at an ever-increasing rate since the start of the Industrial Revolution isn't beginning to have a devastating impact on the world's climate.

How many more Hurricane Sandys will it take before America's leaders treat this problem with the urgency it deserves?

And how much longer will the rest off us accept their inaction and silence?