I Saw the Devil

Detailed with sufficient invention to compel you beyond the gag reflex 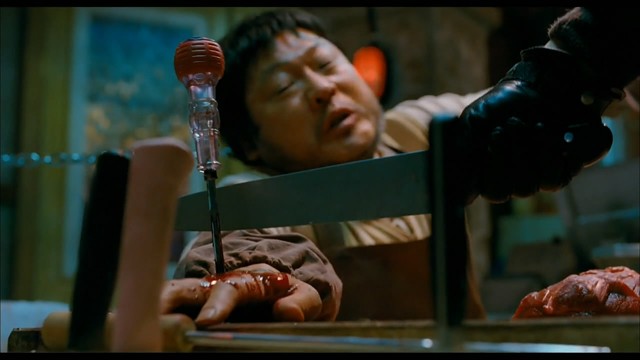 I Saw the Devil

Revenge movies follow a fairly elementary arc: Something heinous happens to someone innocent, and then a basically good person is forced to return the evil enacted on them tenfold, at the cost of their own humanity. Hemmed in by structure, such movies follow a curiously reductive double path; the filmmaking becomes more ornate as the storytelling grows more primal.

Nowhere is this more obvious than in South Korea, where the revenge and gore genres have hit new heights of craft and depravity. Kim Jee-Woon is a leading practitioner of the "K-Horror" genre; his Tale of Two Sisters was a bizarre, lyrical cult classic, and he feels at home in the bloody revenge format as well.

Smartly, he's teamed with the genre's best and most memorable star, Min-sik Choi, who scaled operatic heights of violence in the profoundly disturbing classic Oldboy (2003) and in the nasty Lady Vengeance (2005). Here the intense and charismatic Choi is the baddie, Jang Kyung-Chi, a methodical, remorseless serial killer who stalks the snowy hillsides outside of Seoul. By day he drives a school van, which comes in handy by night when you want to appear harmless to your victims. One of the poor souls unlucky to cross his late-night path is the pregnant wife of a government special agent Soo-hyun (Byung-hun Lee, from The Good, the Bad and the Weird). He's the wrong dude to turn into a widower, and he uses his two-week bereavement leave to hunt down the sick bastard who shattered his future. It doesn't take very long; Soo is younger, faster and much more skilled than his prey, and he has secret-agent cool tracking technology. His only weakness is that his rage has clouded his mind; he keeps catching Jang, torturing him and letting him go, so that the murderer can suffer like his victims. But Jang is a true psycho, far beyond the reach of conventional morality. Soon their twisted psychological duel causes major collateral damage, and the hero is faced with becoming a monster himself.

If this sounds like the plot of an old Charles Bronson movie, it is, essentially, but it's done with sufficient style and artistry to compel the viewer long past the gag reflex. Since the theme's so familiar, Kim is left to distinguish himself by consistently upping the ante of violence, and there are enough stabbings, beatings and dismemberments for a half-season of CSI Miami. I Saw the Devil is visceral in its embrace of viscera, and for all that's on screen, the most effective scares are still the things we don't see.