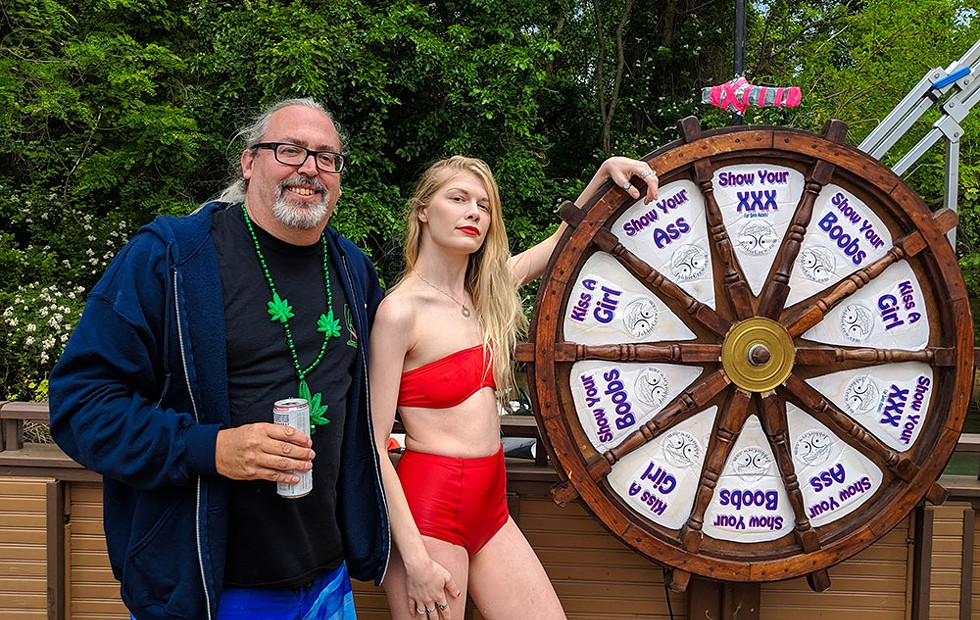 Living in Harrison Township means one of two things: You likely either own a boat or you know someone who does. During the 20 years I called Harrison Township home, I was thankful enough to fall into the latter category. All of my friends had their boating licenses at 14, and had access to their parents' dinghies and skiffs, which we would take to the bay on any given weekend to swim, flirt with boys, kiss each other, and escape the homework and oppressive parental forces that awaited us back on dry land.

Though my sleepy hometown refers to itself as "Boat Town U.S.A." for its many marinas and its proximity to Lake St. Clair, Harrison Township is actually less exciting than its nautical nickname suggests. And, not surprisingly, not much has changed in the 10 years since I left. The speed limit on Metropolitan Parkway has increased by a whopping five miles per hour, Blockbuster is now a Family Video, and high school kids still hang out behind the Kroger on Crocker Boulevard, except now they have smartphones and vape pens. But one of the few things that has remained devilishly impure and true of Harrison Township is the annual ritual of Jobbie Nooner — two words that continue to define the legacy of an unassuming little town that not even I can point to on a map.

Captain Jim has asked me to omit his real name and profession when we talk two weeks before the 44th annual Jobbie Nooner event. Jim has been attending Jobbie since he was 18 years old — he is now 48.

According to local lore, Jobbie Nooner started in 1974 when Modern Engineering employees Lee O'Dell and Lee Wagner gathered 15 of their coworkers and blew off work on a Friday to celebrate Wagner's birthday by taking to the water. In the years since its conception, Jobbie has developed a reputation for being the "Mardi Gras of the Midwest" — attracting up to 10,000 boats and more than 100,000 people around Gull Island.

As a licensed captain, Jim's contribution to Jobbie Nooner is pretty significant. His boat, a pirate ship named the Mystic Maiden, has become a main attraction. But more than the ship itself, it is the ship's "Wheel of Destiny" that is a hallmark of the event, and perhaps Jobbie Nooner's unofficial mascot.

This year, however, marks the end of an era. "I'm retiring the Wheel of Destiny this year," Jim tells me. "I don't know, things have changed out there. It's not the same. I'm getting older and it's time for somebody else to take all the heat for this."

I assume when Jim says that things have changed he is referring to the #MeToo movement and the growing visibility of men's inappropriate and abusive interactions with women. The Wheel of Destiny is exactly what it sounds like — a wheel that, when spun, could determine whether or not your photo ends up being used as online masturbratory material. Women are invited aboard the Maiden to spin the wheel, which could land on one of the following options: "Kiss a girl," "show your boobs," "show your ass," or "show your xxx." Captain Jim says more than 500 women will spin the wheel on Jobbie Nooner and show their bits for some beads.

When the topic of consent comes up, Jim is quick to explain one of his main goals in providing an experience for Jobbie-goers is safety. "We don't force anybody to get on my boat," he says. "That's what kills me, is people get hammered and they come up on my boat and spin the wheel and then they get mad at me, and I'm like, 'What? It wasn't me who took the pictures, it was the 5,000 people around me that did.'"

In addition to his role as the Maiden's main man, which is used throughout the year for family-friendly charters, Jim runs and maintains JobbieCrew.com — an entertainment website for all things Jobbie, which he says receives about a million and a half hits per year.

The site describes Jobbie as a rite of passage for women — and then defines for its visitors what a rite of passage means. The concept for the event comes down to three simple things: "beautiful boats, beautiful women, and hanging out with friends." JobbieCrew.com details the history of the event, and goes out of its way to emphasize that consensual fun is championed above all else, and that anyone attending should clean up after themselves, and respect the police and coast guard authorities.

"It's not a smut website," Captain Jim says. "There's not a single nude photo on there. I know people just think we're a bunch of dirty old perverts out there looking at boobs, but it's turned into more than that. Like I said, it's getting to be a job for me, and nobody wants to do it if its a job."

I have only been to Jobbie once before. It was 2015 and that morning gay marriage had been legalized. I remember sitting in the Kroger parking lot (a lot happens in the Kroger parking lot in Harrison Township) with my then boyfriend. We held each other and cried celebratory tears as NPR detailed the ruling over the radio before going into the grocery store to stock up on Jobbie supplies. Despite having both grown up in Harrison Township neither of us had ever actually gone to Jobbie. Though we accepted the invitation somewhat ironically, and in our seven hours at the event never actually left the boat (mostly because we did too many poppers), it remains one of my favorite memories.

So, going into my second-ever Jobbie experience, I was skeptical that the magic of three years ago would be possible to recreate. Not only was I going for work, but the forecast threatened rain and 15- to 20-mile-per-hour winds (which may not seem like much but when you're at sea can be problematic). It was this gloomy weather news that forced my captain (a Vietnam vet whom I had never met but was referred to me by a friend's mother) to drop out the night before.

I scrambled to find another boat, texting friends of friends, blowing up all of my social media accounts, and even posting to the JobbieCrew Facebook page where I was briefly tempted to rent (and expense) a pontoon boat for $500, as offered by one of the group members.

"Ew, why?" one of my Detroit friends said in response to my Instagram plea for a ride to the island.

It was clear to me that there was a discernible stigma surrounding the event, especially from my Detroit community. I got the impression that others perceived Jobbie as "uncool" or "trashy," and though I may have held this opinion at some point over the years (and even when pitching this story), I found myself deeply offended by the attack on my hometown — and boatless.

When I finally decide to reach out to my childhood best friend, it is in a last ditch effort to attend Jobbie. Our friendship had been on the rocks (my fault) for the past few years, and I knew she might construe my out-of-the-blue communication as insincere.

I was right. She still lives in Harrison Township, and is familiar with my writing, which is why she was hesitant to charter me, my boyfriend, and our photographer to Jobbie. I couldn't blame her. I wouldn't want me on the boat either, knowing that I would be taking notes and possibly scoffing at the drunken behavior of these suburbanites.

What started as a simple phone call resulted in an hour-long emotional airing of grievances, apologies, and in the end a ride to Jobbie Nooner and a friendship on the mend — an unexpected bonus.

"Well, that's the first correction you can make in your story," my friend says when I suggest we hit the water around noon, as stated on the JobbieCrew website. "It starts early. We leave at 7:30 a.m."