I started dabbing again during the pandemic. Things have changed since the last time I took a hit. 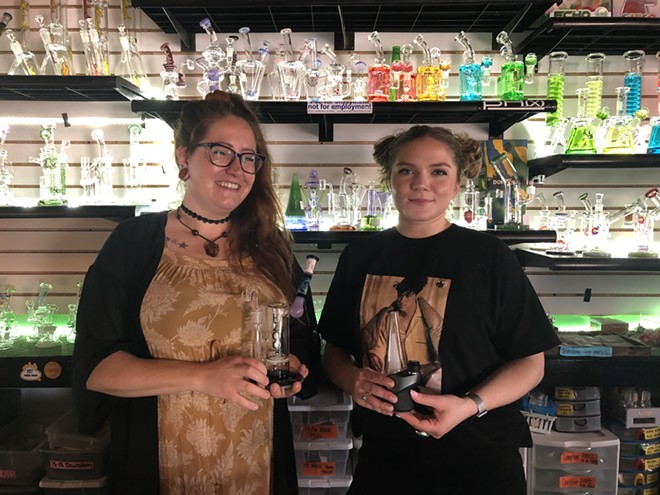 The first time I dabbed was at a house party about a decade ago. That was also around the last time I dabbed. It was a complicated ordeal for a newbie like me, and I needed help making sense of the dab rig — someone to heat the cannabis oil with a blowtorch, while another person released the carb at the right time and I sucked the air into a water chamber. Immediately afterward, I sat down on the couch while my brain felt like it was a balloon floating away, and remained there for hours giggling while dubstep music thumped.

I found the whole thing — the glassware, the blowtorch, the stratospheric high, the dubstep — to all be a bit too much, and I figured good old-fashioned flower was actually plenty of weed for me, thanks. And for many years, it was.

At some point during the pandemic, though, I got bored, and started to crave something beyond the high provided by the flower and edibles that are my usual go-to for weed. So one day, I stopped by B.D.T. in Hazel Park and walked out with a $30 glass dab rig, swung by the nearby Skymint dispensary for some hash oil, and brought it all over to my pandemic pod as a surprise.

Things were great at first. Our tolerance had gotten pretty high after months of staying indoors and smoking weed, and the heavy high provided by dabbing the cannabis oil was a welcome escape from the dreariness of the pandemic. But then things got goofy — I kept breaking the glass “banger” that holds the hash oil. I’d like to be able to say that was because I was simply getting too stoned, but in reality I broke it a couple times fully sober while packing up my dab rig to take to my pod, and sheepishly had to return to B.D.T. multiple times to buy another one. Then things culminated in an unfortunate blowtorch mishap whose details don’t need to be rehashed in this rag, aside from noting it resulted in my friend singeing off his arm hair while watching Tom and Jerry.

I decided then to take another break from dabbing.

Maybe I was dabbing wrong? I stopped back by B.D.T. recently to talk to Ashley W. and Dana Elgie, who the owner introduced to me as the shop’s resident “Dab Queens,” for some tips on how to dab the proper way.

“You’re getting more bang for your buck,” Ashley says of the popularity of dabbing. “There’s a lot that can go wrong, like heating it up too fast — or if you smoke out in the garage, and it’s the middle of winter and your dab rig’s been sitting out. You put the torch on it, it’s immediately going to crack.”

She adds, “But it can be scary, especially because some of the torches have a little bit of blowback right after you fire them. Or some people are out there using those huge, really big propane torches.”

“Yeah, you want to make sure you’re not starting your dab torch when you have, like, a bottle of cleaning alcohol near it,” Elgie says.

Fortunately, there is a spectrum of dabbing products beyond glass rigs.

“Even just the last five years that I’ve been working here, I feel like it has changed so much — and especially over the last decade,” Ashley says.

One of the biggest innovations is the smart rig, or electronic devices that don’t require a blowtorch. Puffco’s Peak smart rig starts at around $249.99, charges with a USB cable, and has pre-programmed heat settings and LED lights to help you time your hits. The higher-end Peak Pro goes for around $399 and has all of the above, plus it connects to your phone via Bluetooth so you can change the temperature with an app. Both models come with a carrying case.

I felt like I was leaving the Stone Age. Yabba dabba do!

But as the Dab Queens explain, high-tech isn’t always better. There are also more simple solutions to dabbing, like the “nectar collector” — a hollow glass tube that you heat up with a torch, touch to the wax, and inhale. No moving parts, literally just a glass tube. Those start at just $10 for a glass tube and $30 for an electronic one.

“If you’re just starting to get into dabbing, don’t spend $400,” Ashley says. “Some people don’t like it. I always say start small. If you want to start with a nectar collector just to kind of get a feel, you’ll understand how it affects you. And if that’s something that you like, then you can move up from there. But don’t jump headfirst to the most expensive thing, because sometimes it’s not for everybody. Maybe they don’t like the head high. It’s just like alcohol — your beer affects you differently than your wine, or shots.”

I wound up getting a simple glass nectar collector, and it seems to be the most elegant solution — and plenty of high. Plus, it seems impossible to break. I don’t like to dab all the time, but once in a while it’s nice to switch it up.