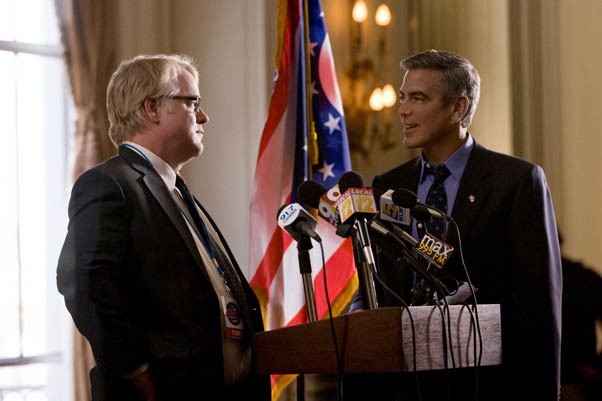 It's no coincidence that Clooney — both in front of and behind the camera — is regularly compared to other Hollywood icons. As an actor, Cary Grant and Clark Gable. As a director ... well, it depends on the film.

Ides Of March, for instance, is shot like a Michael Mann thriller but constructed like a Sidney Lumet melodrama. They're good influences in service of a good movie, and Clooney is a serious and smart enough student to know how to borrow what he needs while subverting expectations about what comes next. But the fact his influences are so obvious makes clear that we have yet to see a film the actor-director can call his own.

Adapted from Beau Willimon's play Farragut North, Ides Of March, at first, seems exactly like the cynical left-leaning drama you'd expect from a man who has made his political views abundantly clear. Casting himself as Democratic Presidential hopeful Mike Morris — a liberal Pennsylvania governor who served in the military, balanced his state's budget, and ushered in programs that supported free college tuition and healthcare — Clooney has fashioned a hero directly out of DailyKos' central casting. Most improbably of all, his seemingly perfect and principled candidate refuses to discuss religion, supporting those who express an agnostic or atheist viewpoint.

But don't be fooled. The movie's central role is filled by Ryan Gosling, who plays Stephen Myers, a slick and brilliant 30-year-old media strategist determined to push Morris over the primary finish line. Locked in a tight race, Republicans are working to divert Ohio votes (voters can cross party lines) toward Morris' primary opponent, a candidate they think they can beat in the general election. This ignites a fast-moving, high-stakes game of political poker, where we're never quite sure who's playing whom.

Set in the storefront offices, hotel suites, and back rooms of the campaign trail, the film is a jargon-rich, bare knuckle moral drama (disguised, for a little while, as a political thriller) that feels like a darker more cinematic episode of The West Wing. Filled with topnotch supporting actors, punchy dialogue, sophisticated storytelling, confident direction, and tried-and-true themes of loyalty, ambition, and personal corruption, it has the kind of pedigree that begs for an Oscar.

Unfortunately, Ides of March also has nothing to say about politics that we haven't already heard. Yes, the friction generated between public virtue and private fallibility makes for dramatic heat, and watching supposedly good people sacrifice their principles for short-term gain is as compelling as it is dispiriting. But at the end of the day, the cynical realization that our system is not only broken but strips those who enter it of their ideals is a well-worn cinematic trope.

More tragically, the movie gives short-shrift to its best idea, skipping past an opportunity to explore the implications and complications of good, moral ideas coming from morally compromised people.

And as much of a delight as it is to watch pros like Phillip Seymour Hoffman and Paul Giamatti bluster, bluff, and scheme, or Clooney sell the inspirational charisma and cold-hearted ruthlessness of his presidential wannabe, great lines and great actors do not great characters make. Each is an opaque foil for Gosling's supposedly tragic matriculation from scrupulous golden boy to cynical manipulator. And that could work, if his protagonist was well-defined enough for us to care. But it isn't.

Within any given scene Gosling is very good, sometimes even great, but neither the script nor his performance provide us with any insight as to who Stephen Myers is, what motivates him, or what he cares about. As result, he's more of a conceit than a character.

Still, there's no denying Clooney's skills as a filmmaker. He knows how to let actors seize their moment yet manages to understate the melodrama. Merging glossy noir visuals with New York theater-style speechifying (a Lumet trademark), Ides Of March may not attain the classic status one would hope for, but it does deliver pointedly thoughtful ideas in a slick entertainment package.