Juggalo Cheech and Chongs, a psychotic gangster, a lottery-winning ex-Marine, and an unrequited love 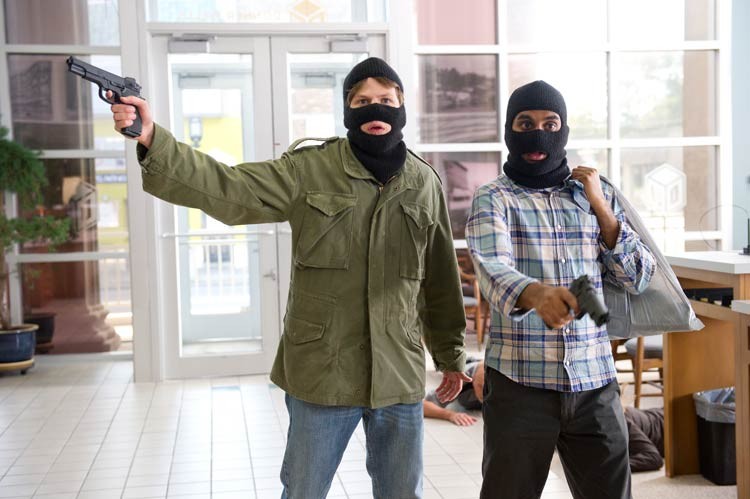 30 Minutes or Less is a pretty good description of what works in this 83-minute potty-mouthed action-comedy. Don't get me wrong; it's an entertaining, if scattered, 30 minutes, but the stuff in-between doesn't do a whole lot to impress.

The premise was made for TV Guide listings: A Grand Rapids pizza delivery guy (Jesse Eisenberg) gets a bomb strapped to his chest by two dim-witted crooks and is forced to rob a bank in order to ... ah, screw it. First time writer Michael Dillberti needlessly complicates what should've been a delightfully sinister black comedy with a pair of Juggalo Cheech and Chongs, a psychotic but bewildered gangster (Michael Pena), a lottery-winning ex-Marine (the always welcome Fred Ward) and an unrequited love interest (Dilshad Vadsaria).

Part of the problem is that director Reuben Fleischer's film is pretty pokey for a frantic ticking-clock comedy. The setup takes too long and the detours en route have a wedged-in feel that undermines momentum. The other part of the problem is that a little Danny McBride goes a long way. Every time Eisenberg's adapt-or-blow up mission starts to reel us in, 30 Minutes or Less jumps tracks to follow the white trash antics of Dwayne and Travis (McBride and Nick Swardson), who are a lot less funny than the film seems to think they are.

Fleischer comes off his promising Zombieland debut to prove that he's really just another Todd Phillips (Old School, The Hangover). He knows how to capitalize on the best-written (and improvised) moments but never corrals this idiot convention into a cohesive movie. Fleischer's approach is too slack and not nearly demented enough. Struggling to balance the script's frenzied action and the actor's endless comic riffing he ends up undermining both. As the mayhem and bloodshed grow the drama never escalates so instead of becoming more invested in the characters' dilemma we end up not caring what happens.

Luckily, there are some hearty laughs — particularly when Eisenberg and his estranged best-bud Aziz Ansari pull off the bank robbery. Ansari, who gives a ridiculously emphatic performance, is a good foil for Eisenberg and his jokes hit more often than they miss. Still, for every inspired bro-humor exchange there's another round of obvious pop-culture punch lines and dudes throwing kidney punches. Seriously, is there anyone out there anymore who laughs when one man-child calls another a pussy?