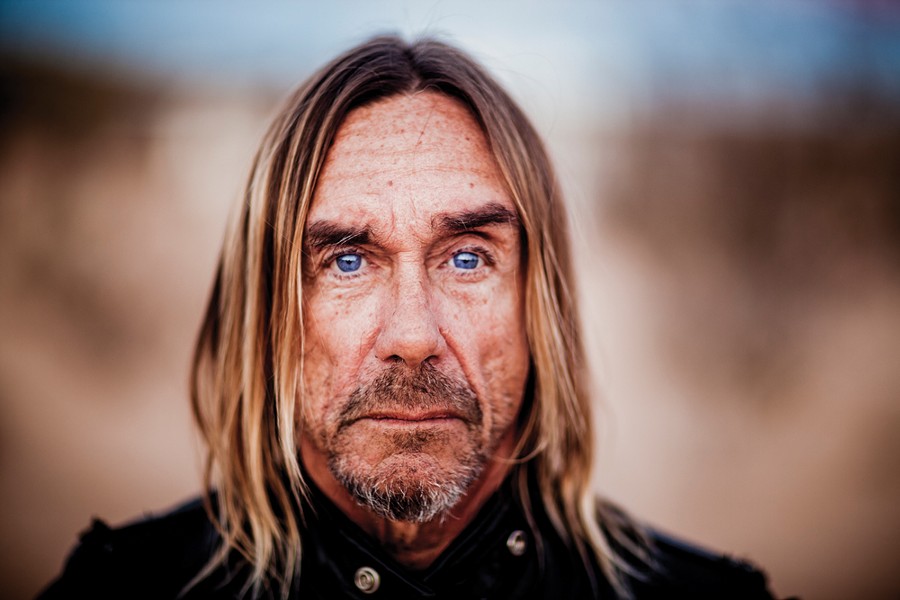 Our hometown musical heroes have a way of bringing interesting endeavors home to roost, from celebrations of Detroit's proto-punk past to Jack White charting a local music future. This time, it's the release of Post Pop Depression — a new LP featuring a punk supergroup composed of Dean Fertita, Matt Helders, Josh Homme, and led by Iggy Pop — that brings us an exhibit of imagery from the album's photo shoot. Our own James Osterberg has always been something interesting to look at, from his onstage antics to his cheshire grin on the Lust for Life LP. This new batch of photos has the same intensity, just without the gymnastics and peanut butter.

What's more, the shots come from a place that couldn't be more iconic in rock history: the Joshua Tree National Park in the Mojave Desert. It's where rock photographer Henry Diltz snapped the Eagles' debut album cover art. It's where Anton Corbijn shot the cover for U2's Joshua Tree LP. It's the site of Gram Parsons' beloved Cap Rock, and where his remains went up in a tremendous fireball in 1973.

But all that isn't the main reason the Post Pop Depression shoot was at Joshua Tree. The area is where Josh Homme's studio is — he's from nearby Palm Springs. It made an excellent hideout for the members of this ensemble, where they could work without distractions. And the images were shot by somebody fans of punk and rock may think unlikely: a German-born photographer who spent his young adulthood marching through the corporate boardrooms of the advertising industry.

That's Andreas "Dre" Neumann. He speaks to us from Los Angeles, fresh off another trip to Joshua Tree, this time to shoot a documentary on the making of the album. The music history of the desert preserve doesn't resonate as deeply with Neumann, but neither does it confine him: He brings fresh eyes to a picked-over piece of rock 'n' roll real estate.

"When I went to Joshua Tree the first time, it is just a magical place," Neumann says. "The peace and the silence. It looks like on the moon in some parts. It's just amazing. That's why they chose to do the record there. They spent, I think, three weeks there, and didn't tell anyone about it. It was like a secret project."

So secret was the album project that the globetrotting photographer had scarcely any idea what he was getting into. "They called me to come out there. I didn't know what it was for. My background is advertising, so normally I'd have a total brief on everything. But Josh just called me and told me to come out. He said he was doing something with Iggy. So I went out there and we just started. I didn't know what it was for. We just did it."

While Neumann is more into jazz than rock, he considers Pop a music icon on par with David Bowie, as "The Passenger" and "Lust for Life" were radio hits during his youth in Germany. And yet the ego-free environment of Homme's studio dispelled the power of celebrity. Neumann arrived and spied Pop, "sitting there in his leather jacket on some bench in the studio. I just gave him a hug and said, 'Let's shoot something.'"

Neumann piled into a red convertible with the band and rode out into the desert, shooting with a Canon digital, a film Hasselblad, and a vintage 35mm Leica M6. He says the freewheeling photo shoot mirrored the approach Pop and the gang took to the album, with echoes of that straight-ahead punk ethos.

"You get the magic because you let accidents happen," the photographer says. "When I finished my advertising career, I stopped planning when I shot. I just set the stage basically so everything is there, and then go there unprepared and let things happen. And this is where I always get the best stuff. Somebody says, 'Oh, this is great! How did you come up with this?' I didn't. It just happened."

Of course, there can be a lot of clicks leading up to where that magic begins. For four hours, Neumann rode with the band through Joshua Tree, photographing the four guys, who played it plain. "They had no makeup," he says. "They just put the jacket on and stand there. So we just started shooting, moving from one location to another until the sun went down. And once the shoot was finished, and the other guys were walking off to the car, I had a moment with Iggy. And he looked at me and I said. 'Let's do a shot (with) only you and me.' So I took that shot. It's him just looking in the camera, like a portrait. He just was standing there and the sun was already nearly gone and I just took that picture — bang — two or three shots. And that was it. And it was one of the strongest of the whole session, I think."

The image is plastered across billboards, adorns magazine covers, and is one of Pop's favorite snapshots of himself as well. The fading desert sunlight works a kind of magic on Pop's weathered, experienced face, with all those ridges and grooves. The godfather of punk may be older, but you still see the gleam in his eye and the swagger in his expression.

"I think that's why he likes his portrait so much and why other people like it: Because it's a man who has seen it all. His age is not how old he is. He's totally young in his brain. He's just seen more, learned more, and adjusted how he does things. He doesn't take any drugs anymore. He's totally there all the time. And yet he has seen so many things most people are never going to see." He adds with a laugh, "So it's also like he's 300 years old."

"It is the moment where it all comes together," Neumann says. "I think it is the best time to photograph him."

A VIP opening at the Museum of Contemporary Art Detroit for an exhibition of Andreas Neumann's Post Pop Depression photographs will immediately follow the April 7 Iggy Pop concert at the Fox Theatre. Tickets are $40 and will be available at mocadetroit.org. Check back at metrotimes.com as more information becomes available.

The exhibit will be on view to the public during regular museum hours April 8.