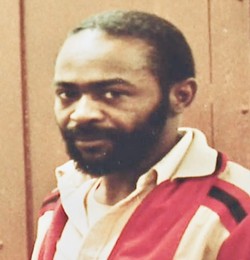 Regarding a possible commutation of Gray’s life sentence, Wayne County Prosecutor Kym Worthy tells Channel 4, “I would be fully on board with that.”

If you’re a regular reader of this rag, you know the heartrending tale of Ray Gray, the Michigan man stuck behind bars for nearly 50 years for a crime he insists he did not commit.

In the early 1970s on the west side of Detroit, Gray was a budding young artist and a four-time Golden Gloves boxing champ on the precipice of turning pro. His future, it seemed, was bright.

But then, he and his supporters say, he was wrongfully convicted of murder. For nearly five decades, Gray has maintained his innocence in the 1973 shooting death of Reuben Bryant.

Gray and his growing number of supporters insist that he’s not only innocent, but that he wasn’t even at the scene of the crime — and that there was no physical evidence linking him to the scene, only what Innocence Canada calls “unreliable eyewitness identification.”

They say it was another man who pulled the trigger. The man with the Fu Manchu: Charlie Mathews.

Mathews, who sported a stylish ’70s mustache similar to Gray’s at the time, once signed an affidavit admitting his involvement in the crime. But Mathews has since died.

Barbara Hill, Gray’s former girlfriend who was at the scene of the crime that night, is still alive, and recently signed an affidavit identifying Mathews as the perp.

"I told all those people, the cops, the judge, everybody — it wasn't Ray,” Hill recently told private investigator Bill Proctor. “He's still my guy after all this time.”

And now Gray’s wife, Barbe, a former prison arts instructor who once interviewed Mathews in prison (long before she married Gray), is preparing to sign an affidavit to attest that Mathews also confessed his guilt to her.

“I would not lie for Ray,” says Barbe Gray. “I wouldn’t lie for anybody — especially a murderer.” 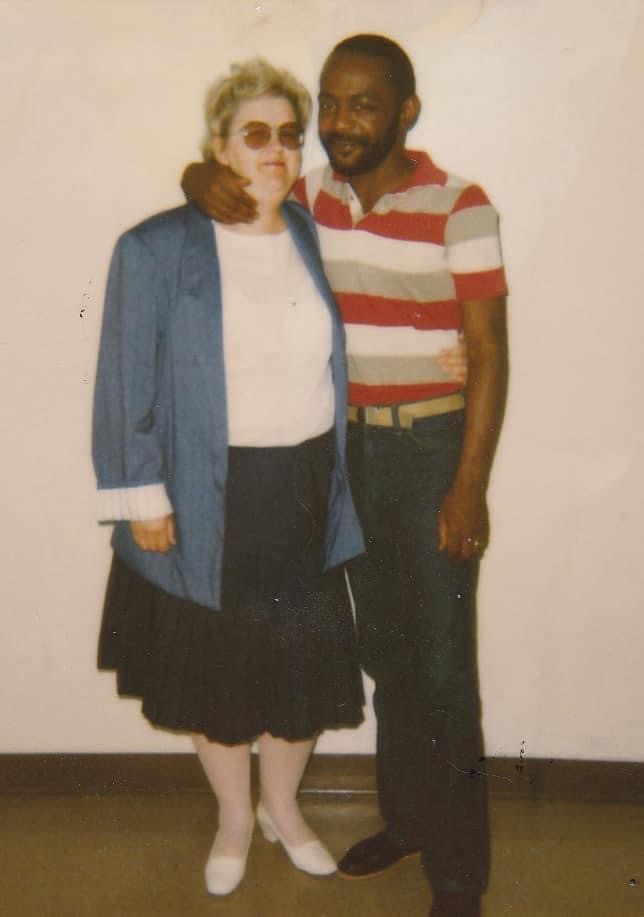 Meanwhile, Gray, 69, remains behind bars in the Muskegon Correctional Facility, where in recent months the coronavirus has infiltrated its prison walls. But today he has a powerful new attorney, some poignant new prison-house paintings, and a renewed sense of hope that he might soon see the light of day.

“We’ve got some evidence that’s never been presented to a judge before,” Silver tells Metro Times, “and that evidence clearly demonstrates that Ray is innocent.” 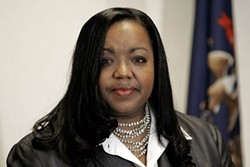 And now it seems the former boxer has someone new in his corner.

“Even though we couldn’t substantiate the claims of innocence, we feel that this is a case where we would be pushing very hard to support any claim of commutation that he chooses to make. And I would be fully on board with that.”

Since Gray last wrote to us from Muskegon Correctional Facility, the coronavirus has run rampant through its prison walls. Like many of us on the outside, he has lost friends and acquaintances to the ravages of COVID-19.

And after Metro Times reported that soap was being rationed at the prison back in April, it saw one of Michigan’s worst outbreaks of COVID-19.

But like a battered boxer up against the ropes of time, Gray has found a way to fend off the deadly virus.

“With this virus, I don’t know how these guys are surviving in prison,” Silver says. “I really don’t. It sounds horrific there — it just sounds absolutely horrific.”

“I always wear my mask,” Gray tells Metro Times by phone from Muskegon, where he's serving his life sentence. “I try to do social-distancing, too, but it’s hard for the guards and the staff to social-distance in here.”

“We’re all in this together,” he says. “We have to work together to help defeat the virus and put our differences aside for the common good — not because of politics, but because it’s the right thing to do.” 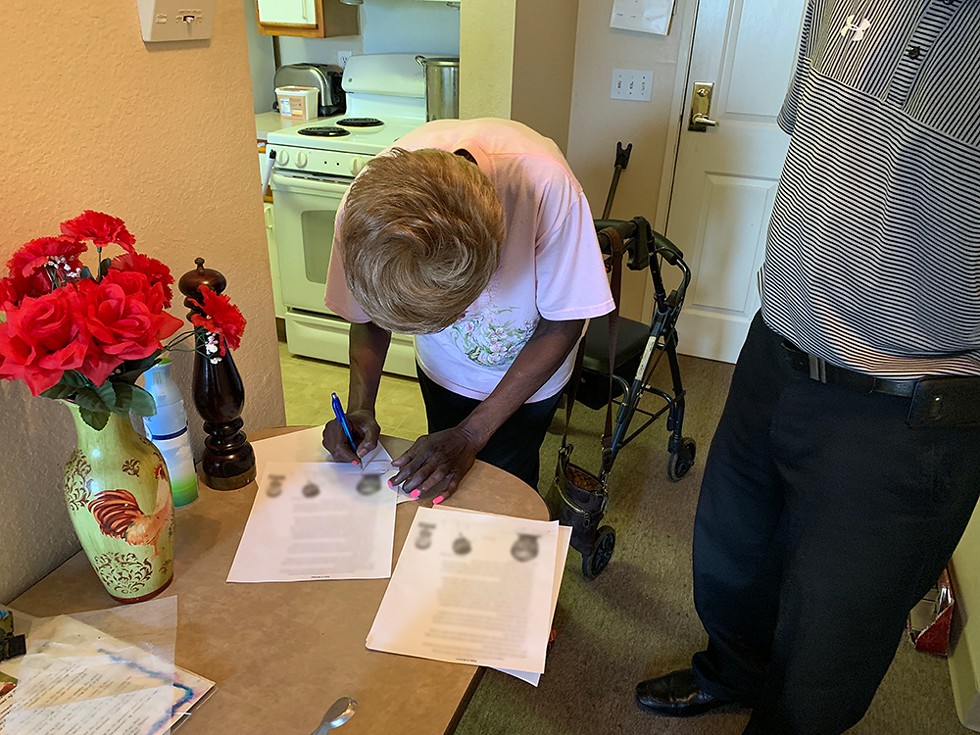 Later this month, Silver and her law partner Phil Comorski plan to file an MCR 6.500, a motion for relief from judgment, in Detroit’s Third Circuit Court.

“We hope that we can get a hearing and get some traction on it,” Silver says.

Along with his new attorneys, Gray's supporters include private investigator and former WXYZ-TV reporter Bill Proctor.

"From the moment he was in custody to the last statement before his conviction, to every moment and experience since then, he has insisted that he is innocent," Proctor tells Metro Times.

Proctor adds that Governor Gretchen Whitmer needs to do more to protect prisoners like Gray, who the state is supposed to be protecting. “Obviously they have no plan except to move people around and try to isolate them,” Proctor says.

If ever there was a time for Whitmer to issue an executive order, he says, this is it.

“I think the power of her pen really should’ve done something serious down that road and essentially set in motion an example for the country of what to do when you’ve got 22,000 people in your custody,” Proctor says. “But the governor essentially decided to sit on her hands because she wanted to go play footsie with a bunch of idiots running around the Capitol with guns.”

Gray’s case is reminiscent of Rubin “Hurricane” Carter, the wrongfully convicted boxer immortalized in song by Bob Dylan and in film by Denzel Washington.

Gray, who started boxing at the age of 12, was just 14 years old in January of 1966 when he and his trainer Robert “Mitch” Mitchell traveled from Detroit’s famed King Solomon Gym to Chicago’s Aragon Ballroom to root on Gray’s stablemate Wilbert “Skeeter” McClure in perhaps the biggest fight of McClure’s storied career.

McClure had won gold in Rome at the 1960 Summer Olympics, where he was roommates with a young Cassius Clay, who the world would soon know as Muhammad Ali.

McClure’s opponent that night in Chicago: none other than Hurricane Carter.

Gray and his trainer sat just a few rows from ringside for the fight that night, which Carter won in a split decision. 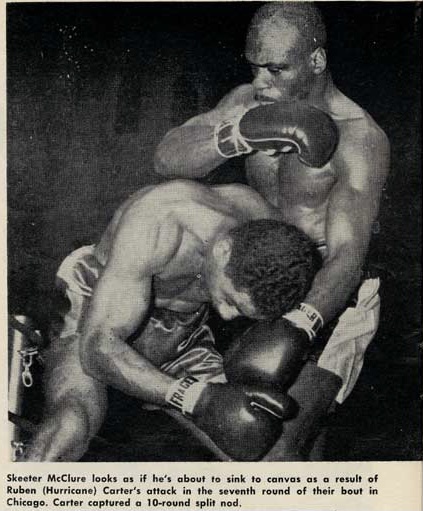 Just months later, Carter was arrested for the murder of two men and a woman in a Paterson, New Jersey bar.

“How ironic is it,” Gray asks, “that the two of us would both be wrongfully convicted of a crime we didn’t commit?”

While grappling with life in prison in the midst of a global pandemic, Gray has recently completed some new paintings, including one titled “We’re in This Together.”

Largely a self-taught painter, Gray was influenced by the likes of Da Vinci and Dali.

“The painting shows two legs,” he says, “one prisoner and one guard, both of them affected by the coronavirus. It just shows the humanity of it all — this virus don’t play favorites.

“The prisoner and the guard are each affected by the other,” he adds. “They have no choice. They are, by circumstance, in it together.”

Doug Tjapkes, founder of Humanity for Prisoners, has been an advocate of Gray’s for years and hopes that Gray will finally go free.

“Ray Gray is a poster boy for the flaws in our judicial system,” he says.

“No amount of money, no expressions of apology can ever bring back two-thirds of his life spent in prison. Now he cowers in the corner of a COVID-infested facility, wondering if a rampant virus will reach him before justice does. I pray that the final life’s chapter for my friend Ray — a quiet, gentle man and gifted artist — will be spent in freedom.”