In a city with a history of gay bars, Paris aims to be the prettiest 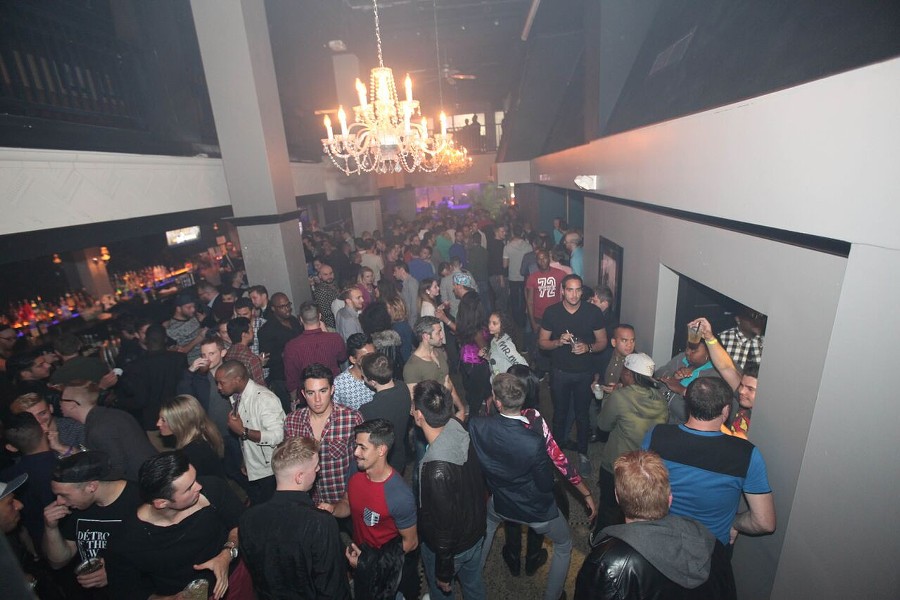 Eaton Blumenstein A scene from the opening party for downtown club Paris.

Despite not having a vibrant gay neighborhood since Palmer Park's heyday in the '70s and '80s, Detroit is still home to the majority of the gay bars in the metro area — from Menjo's to Gigi's to the the Hayloft Saloon and the Woodward. Many are nondescript hangouts from an era when homosexuality was taboo — cheekily addressed by Menjo's old sign, a silver "no" symbol.

But last week, Detroit welcomed its newest gay bar, a reformatting of the existing club Paris. It's the first gay club to be located right in the center of Detroit's recently revived downtown.

Of course, with this summer's landmark Supreme Court ruling legalizing same-sex marriage, the homosexual community has arguably never been more visible in America than it is right now. So why open a gay bar in 2015? (Besides, if all you're looking for is a hookup, there's an app for that.)

According to managing partner and promoter Adriel Thornton, while the LGBT audience is Paris' target demographic, it's about more than the hookup.

"From a programming standpoint, it's kind of like, you gotta step your game up," he says. "You can't depend on the fact that it caters to the LGBT community. It's not enough."

By Thornton's reckoning, there hasn't been a gay bar downtown since the Continentale in the '90s. "I think from a big city kind of standpoint, having a place to go downtown will not only appeal to the ever-growing amount of people who are moving downtown, but working downtown," he says. "It's funny because, you know, this is not a really radical concept. It really should be part of a vibrant city."

Located across the street from trendy Punch Bowl Social, Paris is establishing itself firmly in what has become ground-zero for downtown's redevelopments. In that way, the owners are making a statement.

"The presence of that culture has always been a part of Detroit, and now it's downtown," Thornton says. "What a better way to rise as everything else rises?"

Thornton says that despite the club's LGBT target demographic, the owners hope to make it welcoming to everyone. He laments the tendency of gay bars in more populated cities of becoming too "segmented" — eg., a leather daddy bar, a bear bar, a lesbian bar, etc.

"I get it," he says. "But at the same time, it's this really interesting thing that happens when you go to a smaller town: There's one, maybe two gay bars. So on any given night, you go there and everyone is there. It's lesbians, bears — everybody is there because they don't have many other places to go. You almost feel a stronger sense of community in those places."

Of course, a challenge will be to figure out how to make Paris accessible to everyone. But one way to do that is with the music. Thornton cites the crossover success of of clubs like Menjo's, whose reputation for playing cutting-edge music is said to have attracted a young Madonna, and the more recent success of DJ nights like Macho City and Fierce Hot Mess, which attract a diverse audience.

"We'd actually like to do more chill nights where the point isn't to dance but to have a really good time at the bar," Thornton says. "We just want to try and mix it up so that every night isn't going to be the exact same as the night before. We're really trying to pique a lot of different interests."

Thornton says he hopes to get a mix of mainstream and underground programming. "I think there's some places that just have one idea of what appeals to gay people," he says. "My thing is, people like different stuff. Not that Cher's bad. But it's not all about Britney and Beyonce and stuff. I think being able to also have something different is going to be accepted."

And forget about the seedier reputations of some of the gay clubs in Detroit. "It's one of those things that I think this community in particular is going to say, 'Oh my god, this is the prettiest dance club in the LGBT community!' It's definitely no R&R Saloon," he says, referring to the infamous dive that shuttered last year.

"Nothing is set in stone in terms of who might walk in the door, and I really don't care as long as everybody's cool, and they're there to have a good time," Thornton says. "Every single person is welcome."