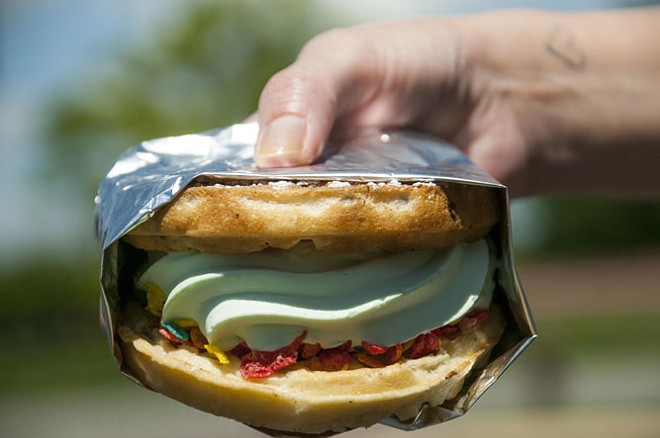 Custard is to frozen desserts what Wagyu or Kobe beef are to steak. It's not that there's no going back once you've tried it — good ice cream is good ice cream, and it's everywhere — but custard is clearly a superior form of cold and creamy frozen dairy. When done right, you'll get licks of extra rich, plush, dense, glossy, luxuriously silky frozen custard that's dropped from a soft serve machine instead of scooped from a hard frozen bucket.

To legally qualify as custard, the frozen dessert must contain at least 10 percent butterfat and be at least 1.4 percent egg yolk solids by weight, though many far exceed those thresholds. There's also less air in custard, which is what makes it dense enough to bend plastic spoons despite its creaminess. Also important is the serving temperature — custard should be served at slightly higher temperatures than ice cream, which points up the sweet and salty components while rendering the custard extra soft and creamy. Freshness is also key — frozen custard should be served within a couple hours of preparation, and the type of machine used also factors into the equation.

Connoisseurs generally agreed that while frozen custard is a New York City invention, the Midwest and South do it best. We checked out many of southeast Michigan's custard makers — here are the highlights.

Custard Hut
25947 W. Warren St., Dearborn Heights; facebook.com/thecustardhut
"That's the one with the waffle sandwich, right?" is what pretty much everyone says when Custard Hut comes up in the metro Detroit custard conversation. Indeed, it's famous for sandwiching a glob of creamy custard between two warm waffles along with a layer of toppings like Fruity Pebbles, which works well with the cool green pistachio custard. The package is dusted with powdered sugar, but while it's perhaps the most original use of custard in town, we also recommend simply dressing up a toasted coconut sundae or cone with toppings like cookie dough bits, peanut butter cups, or anything else out of its thick toppings catalog. The menu can even be a little bit overwhelming as there are so many good combinations that you don't want to mess it up. But don't worry — it's hard to go wrong here as Custard Hut makes some of the city's best custard. 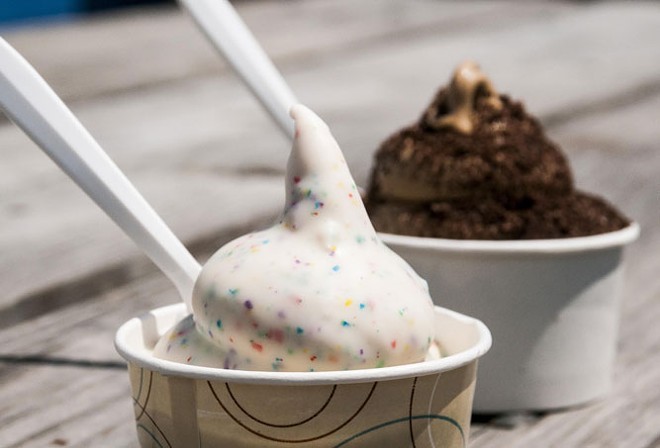 Erma's Frozen Custard
Various locations; ermascustard.com
Is there a better custard combo in metro Detroit than the Wild Erma (custard made with strawberry, raspberry, blueberry, cherries, peaches, bananas, oranges, and pineapple) dipped in a cake batter shell? Maybe, as a case can also be made for Erma's nearly glistening dark chocolate custard served underneath a layer of crumbled brownie. Sadly, the Wild Erma and dark chocolate flavors are only weekly specials. Most custard spots offer a rotating weekly special along with the usual chocolate and vanilla. But that's no problem as Erma's should also be included in the best overall custard conversation. This is super glossy, silky, and soft-but-dense, as the good lord intended, and its toppings portfolio is also among the city's most interesting.

Custard & Co.
32922 Woodward Ave., Royal Oak; facebook.com/custard.company
Like Erma's, Custard & Co. deserves to be in the best custard discussion, especially its black cherry custard cone covered in sprinkles. If you're looking for more than a cone, its sundaes and shakes are the menu's best spots, and we discovered that adorable puppies prefer Custard & Co's straight vanilla cones.

Royale With Cheese
4163 Cass Ave., Detroit
As a Pulp Fiction-inspired restaurant, Royale With Cheese could do no less than create a "pretty fuckin' good milkshake" so chef and co-owner Hass Bazzy decided that he would make his own custard to do so. Indeed, the $5 milkshake selection could be described as such. Choose from inventive flavors like Cinnamon Toast Crunch, Hershey's Pie, and Fruity Pebbles. The cookie butter and Nutella is a genius combination and stop-your-heart-rich, or go with the traditional vanilla and strawberry.

Wally's
22501 Harper Ave., St. Clair Shores; wallysfrozencustard.net
Located in a former fire station on the east side, Wally's provides a solid base of glossy custard off which you can go dozens of directions — sundaes, coolers, whirlies, and shakes. There's also the otherwise hard-to-find frozen custard pie or custard cupcakes that are a tempting diversion from the usual desserts. But you won't want to miss the blueberry custard, or the cream puff — a huge dollop of rich vanilla frozen custard and whipped cream in a flaky pastry that melts quickly after a ladle of hot chocolate syrup.

Bob-Jo's
4071 Fort St., Wyandotte
Lines that wind down the sidewalk in the summer months outside this downriver frozen dessert institution tell you what you need to know about Bob Jo's. Like its counterparts, it offers weekly specials like blueberry cheesecake and pistachio, though we went for and thoroughly enjoyed the traditional vanilla with sprinkles.

Golden Cone
207 W. 4th St. Royal Oak; facebook.com/goldenconeroyaloak
The standard vanilla-chocolate twist is a good way to dip your toes in at this downtown Royal Oak spot, which is not only ideal for its high-end custard, but its hours — it's open till 11 p.m. The best menu item we tried was the Boston cooler, which only comes in a large size, and that's a good thing.