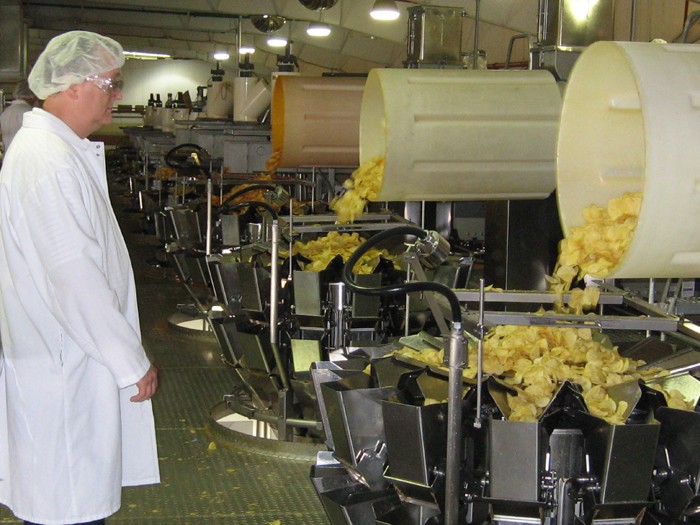 Should you drive by the Better Made Snack Foods factory on Gratiot Avenue in Detroit on a weekday, roll down the window a bit. There’s not much to look at. The scene is a typical Detroit neighborhood, a slumbering main drag leading to side streets with a few tidy homes amid derelict vacants. But you’ll find one overwhelming difference here: This neighborhood smells like potatoes.

Especially so on the day we visit, because the plant, which processes tens of millions of pounds of spuds a year, is running full-tilt in anticipation of Fourth of July weekend. You can see the action through the windows in front of the plant: A steady stream of potato chips courses down a long trough, inspected by workers. We park the car and take a look at the chips that families will be cracking open bags of at barbecues two weeks from now.

Driving on to the plant’s gate on French Road, we arrive at the main building’s visitor entrance, where we’re greeted by Better Made Snack Foods President Mark Winkelman. He has promised us a tour of the plant, and it’s a rare opportunity — the snack factory stopped giving public tours decades ago. This morning, in a half-hour, we’re going to follow the process of chip-making, from potato to bag.

We walk out into the heart of the factory — which is throbbing with the noise of machinery — and the smell of chips hits us like we just opened a bag. The interior is simple: lines of gleaming modern machinery amid tiled walls, with giant white girders and reinforced concrete spanning the high ceiling. But it has a historic charm. A newer plant in the suburbs wouldn’t have skylights, or a front wall that skews past 90 degrees to orient itself with the quaint angle of Gratiot Avenue.

Winkelman tells us this plant has been here since 1940, though it has been expanded several times, evolving to suit what has become an operation that employs 182 people, 77 percent of whom live in the city of Detroit. Winkelman points out that the “buy local” movement has been good to Better Made, and that it’s something the company tries to emulate. The plant uses Michigan potatoes 10 months of the year, and the company makes an effort to source all it can from within the state, from cardboard to salt.

We duck outside, where Winkelman shows us quite a sight: A semi-trailer full of potatoes has been tilted up with a hydraulic lift, literally pouring tons of potatoes into the building as if the massive trailer were a box of cereal. First, the spuds are sorted by size — to avoid having larger chips shatter in smaller bags, for instance. The potatoes are then washed and measured. A nearby testing station even measures the tubers’ specific gravity, to learn how much of the potato is water, which helps these food chemists determine the appropriate cook cycle.

After a thorough washing, the potatoes work their way through a silicone peeler and then go to the slicers, which are more like brass cylinders fitted with razor-sharp steel blades. When the cylinders spin at high speed, they can slice through so many potatoes that their blades begin to dull after only an hour and have to be changed.

After emerging from a rinse and a dry, these spuds are finally starting to look like chips. Arms on a spindle slowly push forward wave after wave of potato slices, now headed for a large, industrial fryer that cooks hundreds of bags of chips at a time, yet handles them gingerly enough to leave them whole.

Cooked chips are shunted through the front of the building for inspection, the same place where we watched them march by less than an hour ago. Employees look carefully for any imperfections, such as overly dark ones (too much sugar), as the chips parade by.

Those that pass muster are conveyed up above the plant’s packaging room, falling onto a large trough that shakes back and forth in the air, driving the chips along. Winkelman explains that the unusual, unique textures of potato chips is why the device has to move as it does, sort of like your hand shaking a bag of chips into a bowl.

We get a view from the mezzanine, where warehouse boss Tom Hurley is an extra set of eyes this morning. The line pours the chips into a series of barrels rotating on their sides. Inside each barrel, a device releases a minute shower of spice. For salt chips, the spray looks almost like a mist of water, for barbecue chips, a shower of paprika-colored powder.

Eventually, the chips cascade out of the barrels into a scale. But it’s like no scale we’ve seen. It’s topped with a carousel that slowly rotates, sending chips spilling almost evenly into cups around and below it. Winkelman tells us that each cup is a scale unto itself, and that a computer knows exactly what each cup weighs. In split-second intervals, relays open the combination of cups that best approximates what it takes to fill the bag below the scale.

The company takes weights and standards seriously, and always ensures a little extra in each bag. But with an electronic gadget like this, even that little extra can be tamed. That’s what 80 years in the chip business gets you.

Below the mezzanine, bagging machines run heavy spools of printed bags up over the throat of a sealing machine. The bags are pulled down, given a shot of heat that joins the bottom and sides, is shot full of chips, and then crimped closed on top. Winkelman cracks a bag open, and we enjoy a Better Made chip while it’s still hot.

Back in Winkelman’s office, he gives us some of the history. Back in the 1930s, the cost of entry into the chip business was very low. Chip companies had none of the gizmos on display in Better Made’s modern plant, and many of them were immigrant families who cooked them in a kettle at home. They wouldn’t sell them in stores so much as vend them to the public. Winkelman tells how Better Made’s founders, Cross Moceri and Peter Cipriano, often sold chips outside movie theaters — before theaters got into the snack business themselves, he adds. In those days, Detroit was known as the Potato Chip Capital of the World, and could brag about its 22 chip companies, of which Better Made is the only one to have survived.

So what gives Better Made its staying power? How did it find that sweet spot between small, regional brand and national snack company?

Simply put, the texture and taste of Better Made chips has created what Winkelman calls an “intense loyal following locally. In Michigan, we have some very, very loyal customers.”

Part of that is doubtless because it’s a family-oriented snack that consumers remember from their early childhood. For older loyalists, the chip is associated with bygone days, back when the bosses of the company might pass out free chips to the public through opened windows on a bustling Gratiot Avenue.

Winkelman says that when people learn what he does, they feel moved to share their memories of Better Made, of cookouts and campouts, or simply nights camped out in front of a warm television.

“Oh, they do. ‘Mom always had Better Made in the cupboard.’ ‘Dad took me down in front and we looked in the window of the factory.’ ‘The first birthday party I can remember going to had Better Made served at it.’ I hear stories from people all the time about that kind of thing,” he says. “It’s a fun product. It’s a fun food.”