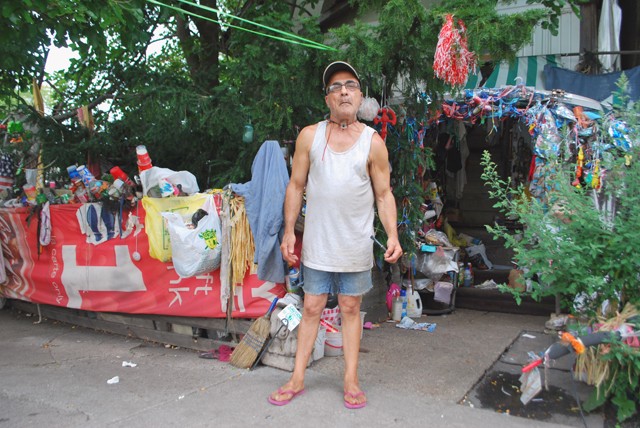 Like so many elderly Detroiters, Migo finds himself the last of the old neighborhood residents on a block most everyone else bailed from as it collapsed, leaving him isolated among the thieves, drug fiends and the desperately poor who moved in as the homes emptied out.

They way he tells it, his rickety old house has been broken into so many times by his neighbors that he finally said to hell with it, and took just about everything that was inside the house and placed it outside. "I put stuff out and said, 'Take it.' I don't care no more." Might as well save everyone the trouble of breaking in, he figured.

But rather than just throw everything in heaps, he draped and wove his belongings almost artfully along his fence, in the trees, and on the walkway to his door. His project forms a canopy over the front yard. There are old shirts and sheets and shoes and hats; deflated balloons, little dolls, stuffed animals, clothes hangers and an American flag or two.

His social commentary grew into a magnificent junk blossom that draws complaints from those nearby and admiring photographers from afar. Some have told him it's a filthy hoarder's nest; others think it's an unintentional art exhibit. To him it's more like a middle finger to his larcenous neighbors here on Holcomb near East Jefferson. But this exhibit, this one man's despair crystallized and displayed to the east side, soon began drawing attention.

"I find out some people like it, start calling it art," he says. "A lot of people take pictures, give me money too."

Like his house, some find Migo an unpleasant presence. He doesn't wash, and he smells like it. He has an opening in his neck from throat cancer surgery, and to talk he presses a finger into the hole to create a hoarse, raspy voice underlined by an air-gasping wheeze when he breathes.

He's bitter and complains about most things. And every minute or so, he turns his head and spits out a batch of syrupy drool. Sometimes it falls to the pavement, sometimes it drips onto him. He's a spectacle.

And he simply doesn't care. He's had it.

"You can't be decent," he sneers. "You don't want to be decent because these people are not decent. I say fuck it." He pauses to spit again. Then he says, "I'm sorry. I don't like to use bad words."

Migo came to this street from Dearborn, and from Lebanon before that. Worked in a factory. His wife divorced him years ago and he had to downsize to a Detroit neighborhood that even back then was on the decline. Along the way he was given the nickname Migo. "It's my street name in the neighborhood," he says. He doesn't care to share his age, but he's been retired a while now. He lives alone, except for two pit bulls he took in off the street.

He's been feuding with his neighbors for years. "The majority are crackhead and wino," he wheezes. Most of his tormentors live in a nearby apartment building, the one he hears is infested with bedbugs right now. The one that has several old mattresses piled by the fence in its parking lot.

The apartment is on a spooky corner. It's eerily quiet, there's little traffic, but there are lots of able-bodied young men roaming the streets on weekday afternoons, selling different drugs, tending to the customers who pull up regularly. Migo knows all the drug dealers by name. This one both sells and uses. That one shot him with a BB gun once from an open window.

At least they work for their money. Everyone else, it seems, regards Migo's house as a bank, and when a man like Migo is seen as better off than you are and worth stealing from, life is rotten.

"You got some change?" they'll ask him. When he refuses because he's as broke as them, the response isn't restrained. "They call me name, they call me Arab, they call me terrorist, you name it. They call me anything. They have hate, too much hate."

They must be desperate to want to enter his house. It's a thick nest of saved trash and hoarded belongings. The front porch alone should repel them — he's got half-eaten pizza slices on top of stacks of books and half-full bottles of moldy liquids lining the steps. Flies burst off everything when someone approaches.

Some in the neighborhood think his project makes great lodging. He woke up one morning this summer and found three men sleeping on his front porch under the shady canopy created by the trees and the trash. "Not just one," he exclaims. "Three! A wino and a crackhead and a homeless. I come from inside — 'What are you doing here?' They say, 'We cool off, it's hot.'"

Another time he lifted up some materials he'd draped over a fallen tree trunk and found a crackhead who'd burrowed his way into a little nook within the trash to sleep.

Whether in solidarity or spite, the neighbors began putting their own contributions into his project. They leave used drug needles. And homemade crackpipes crafted from empty plastic two-liters, aluminum foil and black electrical tape. And for some reason they toss soiled diapers at the base of his front yard tree.

Worst of all are the plastic shopping bags hanging from its trunk; nauseating little gift bags for the man they torment. He pulls one down and opens it to show their typical contents. Inside there's a spent pint of cheap vodka, an empty prescription bottle without a label, a little vial commonly used to store crack, an unused diaper, a pencil, and several paper towels with dried red and brown stains on them. It's like he and the neighbors are trying to out-disgust each other.

He says he's gotten tickets for blight, though officials with the city's property maintenance division said they couldn't find records of him. He thinks little of them. Same for the police. "I don't give a damn about the city," he yells through his wheeze. "I pay tax, but the city don't protect me. The city have thousands of empty houses. I say, 'Why you bother me?'"

A truck pulls up and stops in front of the house. "My man got his shit laid out, don't he?" says James Allen, the driver. The 65-year-old employee of the Water and Sewerage Department drives by now and then on his way home just to see the progress of the house-size sculpture. "Every time I come past there's something new out here." The two men don't talk much, just exchange waves and hellos.

Allen is a fan of Migo's work. "It's not junky," he says. "It's neat, it's organized, it's him being himself. He's not hurting anybody, he's not bothering anybody. The grass most of the times be cut and everything. He's not a pest."

Migo putters around in the background making minor adjustments to his project until Allen drives off. He mentions wanting to return to Lebanon someday, but he's clearly in no shape to do so, financially, physically or mentally. He's stuck here, in this house, with these neighbors, in this city.

He putters his way back to his front porch, lights his pipe, folds his arms and stares outward in defiance as his dogs bark behind him and his neighbors amble by, looking warily at the home-owner they've driven to this disruption of their block.