The good, the bad, and the ugly of the $3.5 trillion reconciliation package 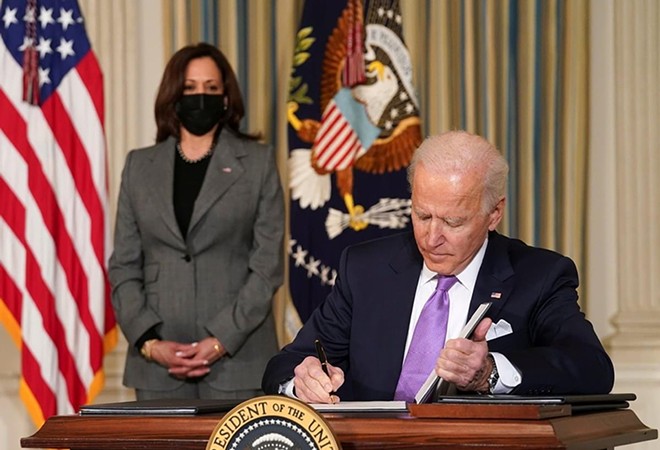 The plans ran up against the buzzsaw of Senators Joe Manchin and Kyrsten Sinema’s anachronistic longing for a bygone Senate. Rather than face down the filibuster, the White House changed course, opting for a smaller, bipartisan infrastructure deal coupled with a larger omnibus package they could pass through budget reconciliation — without the need for a single Republican vote.

The smaller bipartisan package is to include funding for the “roads and bridges” vision of infrastructure to which Republican imaginations seem limited. That said, Republican support for the ostensibly bipartisan bill is stalling as GOP senators balk at proposals on how to pay for it. They seem hellbent on protecting their wealthy donors — bristling at Biden’s initial proposal of funding the nearly $1 trillion package by beefing up the IRS’s capabilities of enforcing tax regulations on the uber-rich, as well as raising taxes on corporations and households earning more than $400,000 a year.

Meanwhile, Senate Democrats are pushing a $3.5 trillion package that they intend to pass through budget reconciliation. The package includes many of the leftovers from the previous plans and then some. And so, after seven months and four packages, it appears the Biden administration finally has its winner.

All indicators show this $3.5 trillion package is likely to pass. Let’s dig in.

The budget reconciliation package includes some game-changing items. Free two-year community college is a down payment on free college in America. Paid family leave fundamentally buys families out of the false choice between having children and having a career. It extends the “Social Security for kids” childhood tax credit that, as we’ve discussed, will transform childhood poverty in this country. And the package will offer every child free school meals, public broadband to address the digital divide, and tax credits for clean energy manufacturing.


The bill also provides critical protections for workers, making it easier to form unions and extend collective bargaining to contractors. It also extends the “prevailing wage” standard, setting the pay rate for federal work at the union-negotiated wage.

The package also includes some critical new items, as well. It would make good on several of then-candidate Biden’s campaign pledges, including expanding Medicaid coverage to states that have not expanded coverage under the Affordable Care Act. It would extend Medicare by covering vision, dental, and hearing services — and could possibly include lowering the Medicare eligibility age. Crucially, it would empower Medicare to negotiate prescription drug prices with pharmaceutical manufacturers, potentially slashing drug prices.

While Democrats seem to recognize the need for climate reform, it seems they haven’t caught up with the urgency. Simply put, this package is not the Green New Deal we need. Sure, it offers serious and far-reaching reforms that will reduce our carbon emissions. But it’s not big enough or fast enough. Don’t get me wrong, I think that EV infrastructure is great. Weatherizing low-income homes is a must-do. A new electrical grid is a must-have. But these were all necessary decades ago.


Temperatures recently hit 116 degrees Fahrenheit in Portland, Oregon, killing nearly 200 people. Last week, California officials warned that the state’s heat wave may kill all the salmon in the Sacramento River. The week before that, there was a fire inside the Gulf of Mexico — I didn’t know such a thing was physically possible (I’m still struggling to understand the physics). This moment calls for a lot more.

At its core, the Green New Deal is about fundamentally re-creating our economy around slowing and mitigating the impact of climate change. It’s about setting ambitious emissions goals, and then meeting them through massive investments in our clean-energy infrastructure — all backstopped by a clean energy jobs guarantee. To be sure, the current package includes a number of important contributions to reducing our gas emissions and rethinking our energy economy. But it may be too little, too late.

Then there’s the matter of healthcare. While I applaud expanding Medicaid, filling the gaps in Medicare, and reducing prescription drug prices — is it really enough? We’re living in a pandemic that is careening through its second year. Millions of people lost their health insurance because of the implicitly tenuous way we tie health insurance to employment in this country. Forty-seven rural hospitals went bankrupt or closed as health insurers made billions. We need — we needed — Medicare for All. But even if the Biden administration doesn’t agree, it could at least make good on the public option on which Candidate Biden ran.

And yet perhaps the most important piece of American infrastructure — the one on the verge of destruction as we speak (as the politics around these packages showed) — is still at risk. That’s our democracy, our civic infrastructure.


As GOP-gerrymandered state legislatures around the country race to enact draconian voter-suppression laws (it is now a crime to serve a drink of water to someone waiting in line to vote in Georgia!), these packages are fundamentally failing to protect our democracy from a party hellbent on legalizing their minoritarian rule.

Make no mistake; it all comes back to the filibuster. The GOP is being aided and abetted by wayward Democrats like Manchin and Sinema in this effort. And that’s because it’s possible that both of them could vote in support for a pared-down bipartisan infrastructure bill and a larger budget-reconciliation bill and still have failed to protect the fundamental fabric of our country. With the filibuster in place, we will not have federal voting rights legislation. And without federal voting rights legislation, we might lose our democracy to the very forces who will not admit that the 2020 election was free and fair, and who are now calling their insurrection on the Capitol on Jan. 6 a “peaceful protest.”

Democrats could spend trillions protecting our physical and even human infrastructure in an effort to secure the future of our country. But if they fail to protect our civic infrastructure — our national foundation and identity — it's unclear that we’ll even have a future country.

This article was originally published July 15 on The Incision. It is republished here with permission. Get more at incision.substack.com.