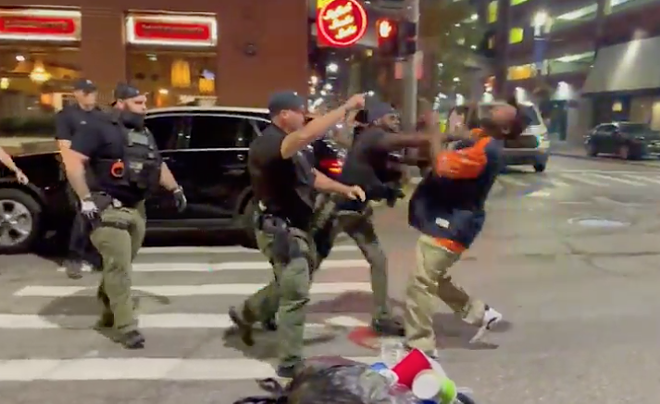 A Detroit cop is under investigation after a cell phone video captured him punching a man in the face in the middle of the street in Greektown.

The 45-second video was posted on Reddit on Sunday (titled “Detroit pigs handing out the brain damage”) and generated more than 1,500 comments as of Monday morning.

Detroit police said Internal Affairs is investigating, and the officer was placed on desk duty.

“The Detroit Police Department was made aware, via social media, of an allegation of excessive force in Greektown,” Second Deputy Police Chief Rudy Harper tells Metro Times. “Internal Affairs is reviewing the circumstances surrounding this allegation.”

Details of the incident were still murky on Monday, but more information will be released later, Rudy says.

“DPD is committed to remaining transparent throughout this process and will provide updates to the community and our media partners as soon as practicable,” Rudy says.

The video starts several seconds before the cop punches the man in the jaw, causing him to collapse. The officer lifted up the man by his arm before letting him fall back down.

No officers intervened, and they appeared to leave the scene without making any arrests.

“He approached him with every intention to sucker punch him,” Reddit user Conway2709 said. “Watch his body language as he is walking up to him - he’s just waiting for the perfect moment to catch him off guard and assault him. What a fucking piece of shit. Imagine if one of us did that, we’d be thrown in jail and face serious charges. This guy just gets to go home and continue his daily life. Unreal.”