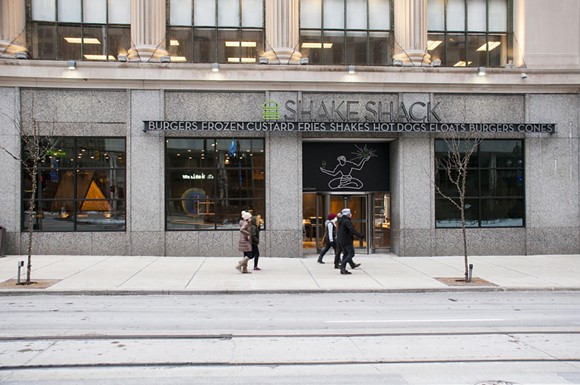 Like the larger landscape, downtown Detroit's foodscape looks much different than it did five or six years ago. To get an idea of just how far the restaurant scene has come, drive down Michigan Avenue in Corktown and count the number of restaurants that weren't there in 2011. Do the same in and around the Cass Corridor or downtown, and consider that the whole area was, not too long ago, considered by some to be a food desert.

And, as in the previous few years, the restaurant scene is expected to continue shifting, growing, multiplying, and blooming in 2017.

Just look at the list of establishments preparing to come online: Prime + Proper, Flowers of Vietnam, Lady of the House, Gather, Wilda's, Atomic Chicken, and on and on.

Indeed, there's something of a gold rush playing out, but there's also discussion in the bars and bistros about Detroit's restaurateurs pumping a soon-to-burst "restaurant bubble."

The theory of those pushing it, in short, is that seats are outpacing demand. For nearly 50 years, Detroit's population declined. It's only in recent years that the city managed to turn that ship around, so it's worth asking whether there's a critical mass of residents who can support so many new eateries. Could 2017 be the year that restaurants that opened to so much fanfare two or three years ago start dropping? Is the bubble real? Or is it a crackpot theory?

We asked some of Detroit's restaurateurs to weigh in on the topic, and received a range of responses.

Mabel Gray owner James Rigato views it as not so much of an oversaturation of restaurants, but a lack of quality, original ideas, and execution in many of the new ventures.

"There's a formula that a lot of people are following: How many restaurants are going to open up and rip off Selden Standard's menu?" he says. "We're starting to see a rinse and repeat, and this multiplicity is going to get dumber and dumber, and it's a poorer version of its original form. Every time a good restaurant opens up, a few shitty ones open up, so it's not 'too many restaurants,' but a lack of quality."

Jessi Nigl is a former manager at Selden Standard and Slow's, and bartended at the Detroiter and Nancy Whiskey's in the 1990s, long before downtown's revival. She says some of the older restaurants, and perhaps some of the institutions, are perhaps most vulnerable.

"The bulk of the business models previously lived and died on sporting events, summer festivals, and those sorts of things, and that's not really true anymore for downtown restaurants," she says. "But older restaurants that people see as out of date and irrelevant could potentially close. I don't know if there's room for new restaurants to reinvent and reoccupy those businesses. It seems like there will be given the demand for residential property. Detroit is at full occupancy — there's no room in the inn."

Dave Kwiatkowski says that's a situation that developers are addressing. His group, the Detroit Optimist Society, opened Wright & Co., Sugar House, Bad Luck, and more. He's also planning several new projects, so the "too many restaurants" question is one he says he regularly ponders. But he notes demand to live downtown is still strong, Dan Gilbert's Bedrock Real Estate Services is turning its attention to housing, and residential projects are in the works.

"I attribute it partly to greater awareness of the bar, but mostly to more people living downtown, and what keeps you open is your Monday crowd, your Tuesday crowd, and crowd during the weekdays, and I think that's really growing for us," Kwiatkowski says. "That helps me sleep at night."

Sweet Lorraine's owner Lorraine Platman ran a restaurant out of the Millender Center between 2002 and 2009 before opening several locations in the burbs. She returned to the city last year with Sweet Lorraine's Fabulous Mac n' Brewz near Wayne State University. Platman says she partly focused on the suburbs because investors had a grip on the best downtown property and wouldn't sell or lease to her.

The only unfortunate byproduct to the boom she finds is its impact on the employee pool, which is presenting a new challenge. But in terms of volume, she's serving more and more new customers downtown.

"The amount of people living in Detroit wouldn't be able to sustain amount of growth in the restaurant industry, but it's attracting people from the suburbs to Detroit," Plattman says. "For the first time, suburban people are looking at Detroit as a better place to go out to eat than the suburbs."

"Great places will stay great and maintain their customer base, but at the same time, when you have a lot of new places opening, everyone is fighting for the same slice of pie, and that's definitely forcing us to step up our game and provide phenomenal customer service," he says. "It's an important and healthy part of the development of a dining scene, and this is sort of a revitalization of it. I think we will see a lot of mid-level guys falling to the wayside."

Rigato says it's up to customers to decide which restaurants that may include. "It's a call to arms to the diners," he says. "Do a little research and hold restaurants accountable. Support the restaurants you believe in, and vote with your dollars."

In the West Village — where restaurants like Rose's Fine Food, Craftwork, Detroit Vegan Soul, and Red Hook are going strong — Nigl sees the best of the local restaurant industry's growth.

"That's the first neighborhood that doesn't have the benefit of being real close to downtown that has successfully created a little district for members of their community to enjoy," she says. "When you're in those establishments, look around: 75 percent of the people are from the neighborhood."

Larry Mongo, owner of Café D'Mongo's, offers a different perspective. He says satisfaction with the number of restaurants downtown is a product of the city's ingrained blue-collar way of thinking. Detroiters shouldn't tolerate limited options, Mongo says, and he recalls the days of 1950s and 1960s Detroit, when he used to "follow the smells" of good food around downtown.

"We need 40 more restaurants in Detroit," he says. "I used to travel just to eat. Go to Toronto, Montreal, Paris, Amsterdam, or Cancun before it became a resort town. Every 20 steps you go in here or go upstairs there, because there's some place to eat.

"If we're going to grow, we need to change the way we think, and change our taste buds."