Still in the groove

February 23, 2017
comment
When the subject of industry in Detroit comes up, most people aren’t talking about vinyl production — but yet here we are, in 2017, about to become one of the only cities in the entire world with not one but two vinyl pressing plants. Third Man Records, you know. How could you not? The White Stripes defined an era and the garage rock revival sound, carving out yet another genre of significance in Detroit’s rich musical history. Jack White began Third Man as simply a label imprint in 2001; a move to Nashville in 2009 gained a physical headquarters that grew from just a few offices to a small retail space, distribution center, and theater for live performances, among other things. The Detroit location followed in 2015, with much more space for retail than Nashville but many of the other same features – now to be built up even further with the addition of the pressing plant. The same look and feel, those bumblebee colors and a certain aesthetic flair, runs through all things Third Man; you can spot a Third Man operation from a mile away.

With the addition of the plant, Third Man now has the ability to oversee every single part of the music production process — from initial recording at their in-house studios or live at the Blue Room in Third Man (the only venue in the world to record live shows direct-to-acetate) all the way through to the final, finished piece of vinyl, buoyed by both manual operation (the presses themselves are actually manual, so a human touch is necessary to manufacture each and every record) and intense quality control.

Third Man Pressing is officially open to the public on Feb. 25, with a party that includes not only live music but also the first commercially available records to be pressed in the plant. These include red reissues of both the White Stripes’ first self-titled album and their second, De Stijl; a Destroy All Monsters / Xanadu split 12-inch on black vinyl that was originally released in limited numbers on Cary Loren’s own Black Hole Records in 1979; and their first third-party release, a licensed and limited pressing of the first record in our own music editor Mike McGonigal’s Detroit Gospel Reissue Project, the Johnson Family Singers’ Don’t Let the Devil Ride.

A peek into the goings-on of the Willy Wonka-esque space — brightly colored art has been painted right onto the walls by Cass Corridor artist Robert Sestok — will be visible at all times during the store’s business hours, with plans for tours through the facility and access to more information about some of the technical aspects of the manufacturing. In other words, Third Man Pressing is probably the world’s only immersive pressing plant. Although the plant came to life in the impressively quick timespan of a year, dreaming about it went on for a bit longer. It was when Third Man realized the potential of some extra space at the Detroit location that a concerted search to find machines began — and it wasn't easy. Vinyl production plunged with the emergence of new formats in the ’90s, and decreased interest was quite enough that pressing plants around the world began to close as less and less records were made.

But even with the sharp renewal of interest in vinyl over the last decade or so, the lack of pressing equipment has been a stumbling block for anyone suddenly did want to open their own operation. People who held onto their machines knew what they had, to the point where one might even have better luck trying to track down a warehouse with forgotten equipment. Many who did hold onto their machines dumped them when the metal market spiked in an attempt to regain some of the money they had invested into storing the equipment.

But the renewed interest in vinyl isn’t slowing down. People want to own more and more albums on this format, for various reasons. Not just new music either — everything from previously unreleased ’60s psych and folk to ’90s alternative that never bothered with the format. But not even just that — major labels have hopped back on too, and all kinds of easy-to-find classics are being reissued in over-the-top deluxe editions. Delays of several months at a time are very real.

New machines will be doing the pressing at Third Man; in fact, they are eight of the first 10 new machines ever produced by German company Newbilt Machinery, the first company to make new presses in something like 40 years. And they won’t be pressing solely Third Man releases; they also intend to help relieve some of the bottleneck pressure throughout the industry as a whole — the first of which is, as noted, the first three titles in the Detroit Gospel Reissue Project. 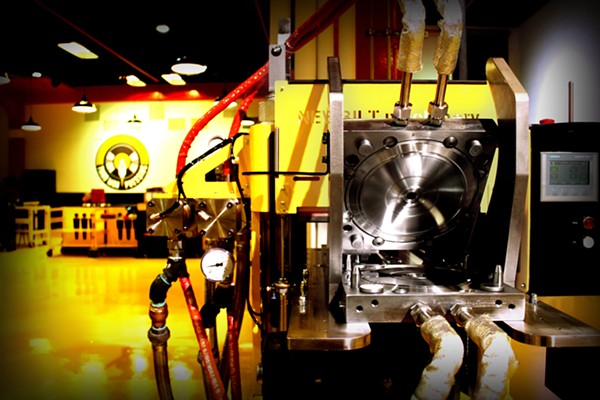 This also means for a peaceful coexistence with the pressing plant that has quietly kept Detroit on the vinyl manufacturing map since 1965: Archer Record Pressing, a sacred name to most local independent musicians, a group that has always been a loyal and consistent customer base for the enduring plant. It’s a family business, and current owner-operator Mike Archer is the third generation to man the machines.

Opened at the height of vinyl in a city with an especially high caliber of music — not just Motown, but rock, dance, jazz, hip-hop, you name it — being produced on a daily basis, it’s impossible to even begin to truly consider how many terrific records have come to audible life at Archer in its 50-years-plus existence. And that’s without even factoring in the rest of the country, let alone the rest of the world. Even when the industry slowed down, Archer’s location in Detroit continued to serve as a boon to business, partially thanks to vinyl’s role as a DJ tool (techno is often said, after all, to have been born in Detroit in the ’80s and early ’90s) and partially simply because the city’s strong connection to music has never wavered, no matter the ups and downs of markets and the industry. 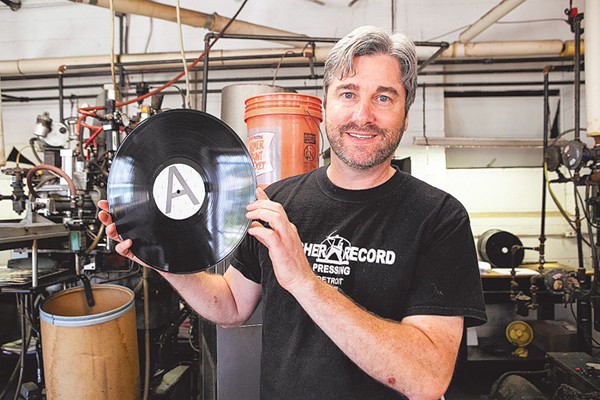 With the city now home to two pressing plants, that connection has only been deepened. But at the end of the day, Mike Archer puts it best when he says with a laugh, “People want records. We make records. Don’t complicate it.”