Maria's is a restaurant reborn in Royal Oak 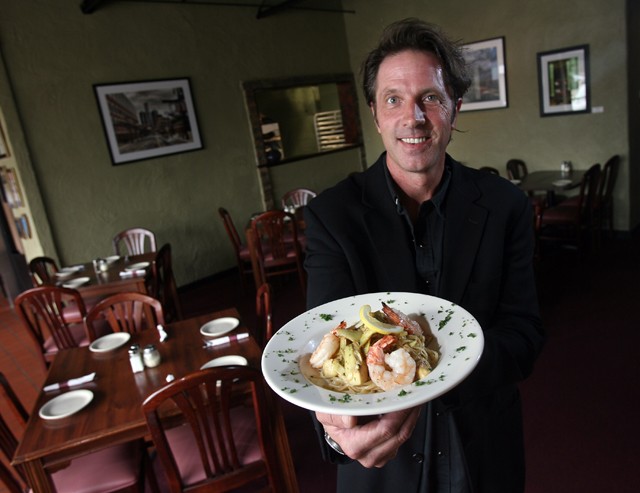 There are movies about restaurants (Big Night, Ratatouille) and there are countless movies about comebacks, but has there ever been a feature film about a restaurant comeback? If not, The Buddy Orlando Story could qualify, right down to the ironic setting in a former Little Caesar's.

Native son Orlando is attempting to revive a restaurant and a concept — yes, a dream — that sustained himself and his parents for 30 years, an old-school Italian eatery that, back in the day, featured checked tablecloths, Chianti-bottle candleholders, Sinatra on the stereo and lots of red sauce.

Those accessories aren't in evidence, but Orlando does plan to put up the twinkle lights and red Venetian blinds that were a feature of the popular Maria's Front Room. Maria's of Royal Oak, opened in late June and fairly barebones yet, is successor to the place begun by Joan and Carl Orlando at Grand River and Outer Drive in Detroit. It was known for its house-made wine — which Orlando hopes to add by the end of the year — and for its traditional-in-America list of pasta favorites.

Buddy took over when the restaurant moved to Ferndale in 1993. Joan continued to hostess, but after Mom and Pop died within a year of each other, Buddy, in debt, lost Maria's in 2008. (The Maria's in Ferndale was snapped up by a non-relative for $5,000 and is still in business.) Though he worked at other restaurants with a broken heart, Buddy always vowed ...

He's back! Cue violins, or should it be trumpets, as Buddy fights not just for a living but for tradition, and vindication. He's head chef, hands-on and using recipes from the Grand River days — with prices that come pretty close. That means huge $5 appetizers and $2 salads, soups, vegetables and pasta side dishes. It means "Maria's classic spaghetti" for $7 and seven veal dishes no more expensive than $16.

It, of course, means lots of oregano in the red sauce — and that diners are immediately served with the round of hot and buttery garlic bread that was a Maria's mainstay. It's deservedly famous: Thick and crusty, it precludes the need for appetizers, but you'll want one anyway. The Orlandos' take on spiedini is layers of bread, Muenster and mozzarella dipped in egg wash and fried, so rich and lemony it could be dessert if not for the chopped black and green olives sprinkled on top. Four decent-sized pieces are $5.

Even heftier are Italian sausages baked with green and hot peppers, onions and lots of marinara and mozzarella — a nachos-like concept, only better. Calamari — whose batter could stand more flavor — are served with both marinara and a lemon-caper sauce, and Caprese, salads and individual pizzas (also $5) are also possible.

Asked the secret of his marinara, Orlando says it used to be anchovies, "until so many vegans were coming in in Ferndale, I had to take them out." Now he reveals only wine and "how you cook the base first." He's using some recipes that weren't even used in Ferndale, only at the Detroit location, and says he's the only one left who knows how.

We figured we had to try spaghetti and meatballs, an Italian-American invention, if just for ritual's sake. Bits of tomato are visible in the sauce, and the spicy meatballs have some real heft and chewiness.

A similar red sauce, without the meat, is used on Scallops Provincial. The dish evidenced little taste in either scallops or fettucine. I asked Orlando about it, and he admitted he hadn't made that recipe for 20 years and was still trying to perfect it. The veal in Scallopini alla Marsala was also fairly taste-free, though the sauce was fine, avoiding the cloying sweetness sometimes encountered. Stay tuned to discover whether Orlando recaptures the former magic.

He certainly has in linguini with clam sauce, the white variety. This dish was a staple of my young adulthood when eating alone, but I always made it just with butter and canned clams resembling eraser bits. Orlando's is a different and transporting experience, extraordinarily rich and creamy, a little spicy, with tender clams in pieces large enough to bite into.

I would have preferred more garlic in my Spinach Tortellini, but the fluffy green pillows are appropriately al dente and served with fresh Parmesan. I know the shaker-jar of grated Parm on the table is authentic to the original Maria's, and it tastes sharp and doesn't resemble sawdust, but that's a detail I'd prefer to see updated.

There are as many tiramisus as there are dessert chefs, and Orlando's (I ordered it the first day it appeared) was less ethereal than many, pretty cakey, with a good, strong coffee flavor. Other desserts are spumoni and cannoli.

Besides the 13 veal and chicken dishes, five seafoods and 11 pastas, Orlando makes hand-tossed round pizza, including the original Maria's Special with seven toppings, just $12 for a large.

A portrait of Joan Orlando in a 1950s hairdo looks lovingly down on the proceedings. In the corniest version of my movie, there'd be a dissolve: Mama tells son, "Be a stickler always, Buddy. Use the best of everything." He's trying, Mama.