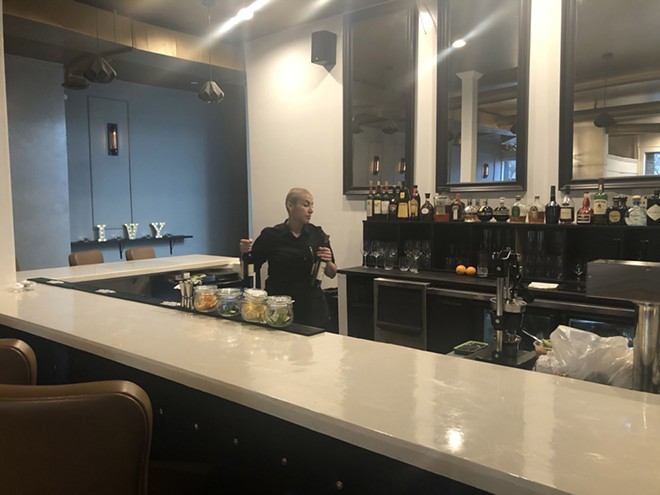 For nearly 30 years, the two buildings on the corner of Jefferson Avenue and Belvidere Street in East Village stood vacant. But as of late December, the smaller of the two is now a fine-dining restaurant, serving up fusion dishes like wonton tacos, mezcal wings, and charred whole Branzino — something in short supply on this stretch of Jefferson.

The project, Ivy Kitchen and Cocktails, is the brainchild of entrepreneur Nya Marshall, who recently quit her job in the auto industry to go all-in on her dream of revitalizing the block. A native east-sider, Marshall says she's been in real estate for years — she bought her first house at 19 — but decided to she wanted to give back to her community in a more substantial way.

"Obviously, I'm a small fish in terms of real estate, so my thought was I'm not going to go after anything downtown, any hot-button areas that everybody's looking at," she says. "But what I did know is that [the development] had to be spread out." Ivy Kitchen is about 10 minutes from downtown and Grosse Pointe.

The 9,000-square-foot project was a 100% top-to-bottom renovation. "It was literally a shell of a building," she says. (The name comes from the ivy that she says was growing on the building.) Now, the bright space holds 65 seats, including a bar, with an interior designed by her friend Barbara Johnson, of Walls of Virtue.

Marshall first got the idea to pursue a more ambitious real-estate project after the economic crash more than a decade ago. "I ended up living in the same house as my family as if we were children again," she says. "But what that showed me and taught me was that in Detroit, we are blue collar. We are known to work. That's what we do — we work. And we were not really thinking about ourselves in terms of our longevity and how we want our lives to look."

"I started thinking about what I wanted my life to look like in 10 years," she says. 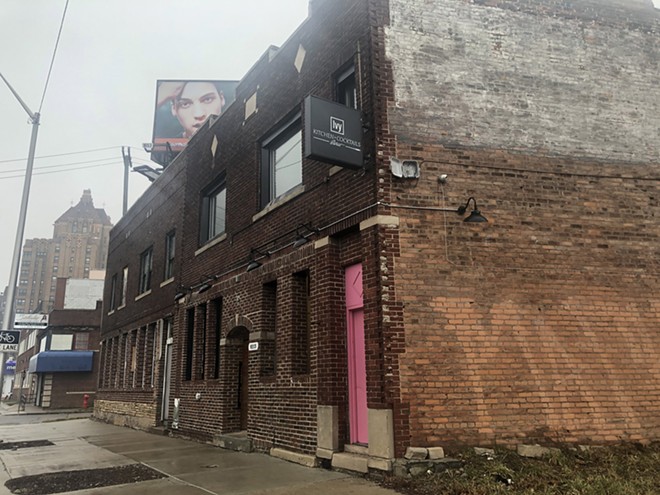 She says she didn't initially plan on opening a restaurant from the outset of the project. After she purchased the property about five years ago directly from the owner — which had previously housed a hair salon, and at some point, a veterinarian — she then set out to ask the community what sort of business they'd like to see there.

"I [went to] all the neighborhood associations, all the condo associations, the churches, et cetera, [and asked] what they would like to see," she says. "Because even though it's my community, and I have my own thoughts, I wanted to see what the consensus was at large. And so one of the main things that I kept hearing was good food, good quality space where you in your neighborhood you can walk to, take a bike to — like back in the day.

"You don't want to just put something in a community and then they reject it," she says.

To that end, Marshall partnered with chef Devante Burnley, who came up with a menu that Marshall describes as fusion-elevated comfort food. "It's indicative of many different cultures," she says. "We have some Spanish entrées on there, we have Mediterranean, we have Asian." Prices are in line with other fine-dining spots in the city, ranging from $12-$15 for small plates and $16-$38 for main dishes, which also include a crispy chicken sandwich, an "Ivy Burger" with a fried egg and chipotle jack cheese, shrimp linguine pomodoro, and NY strip steak, among others. Cocktails include a $14 Hennessy Jalapiña, along with wine, beer, and mocktails.

Marshall says she's committed to hiring people in the neighborhood. As far as the rest of the complex, Marshall says it'll take time — but Ivy is a start. She says she envisions the two lots behind the buildings as eventually becoming a garden to grow microgreens. She's searching for a commercial tenant upstairs, and has a dream of transforming the larger of the two buildings into a technology education center for the neighborhood's seniors; she's seeking investors with a goal to open next year or so. Marshall says she envisions classes to help seniors learn how to use the internet to adapt to life in the 21st century.

"Even if I start with just one or two classes, I think that would be of value and be a benefit," she says. "At this point in my life, I'm all about community. Everything I do has to have a community component to it. It's like you get a little bit older, and giving back and the quality of life and what you leave as your legacy becomes way more important than yourself."