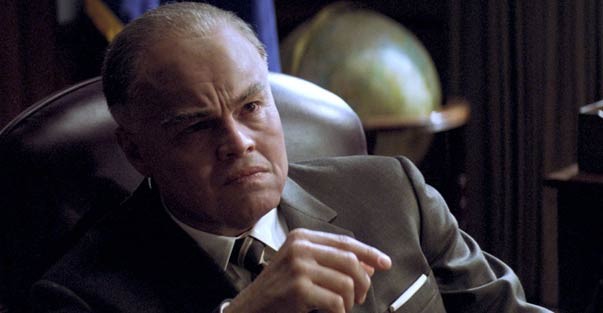 Look, Clint Eastwood is a talented guy, but there's been an impatient, half-realized aspect to his recent work that suggests a filmmaker on artistic autopilot. Or maybe the guy is just tired. Changeling, Invictus, Hereafter and even Gran Torino (which was saved by Clint's spirited performance), have all been shapeless, lumbering affairs that sported interesting ideas but fell short of excellence because of their obvious and chaotic executions. J. Edgar probably represents Eastwood's least convincing film to date.

Emulating Citizen Kane, even in the best of circumstances, is a dicey proposition. More the aspiration of 24- than 84-year-old filmmakers, it's hard to imagine anyone believed Leonardo DiCaprio in bad old-man makeup and a 39-day film shoot are enough to do the job. Long-winded, shapeless and trite, this two-and-a-half-hour exercise in Oscar bait plays like a dramatized Wikipedia entry that hasn't been edited for innuendo, half-truths and self-serving revisionism.

Told through flashbacks, Eastwood's convoluted film charts the 50-year career of FBI Director J. Edgar Hoover (DiCaprio), but mainly focuses on his relationship with his mother (Judi Dench), his secretary Helen Gandy (Naomi Watts), and his associate director Clyde Tolson (Armie Hammer). Using Hoover's less-than-factual 1972 memoir as his narrative spine, screenwriter Dustin Lance Black touches down on key events at the beginning and end of the man's life (1935-1962 are mostly ignored), giving a hearty chunk of his attention to the Lindbergh baby kidnapping case (which might have made for a solid film unto itself). And, like most cradle-to-grave biopics, Black ends up delivering a leaden and inconsequential history lesson that's punctuated by histrionic outbursts.

It's a surprisingly misguided approach, given the dramatic prowess of Milk, a script that effectively confined its narrative ambitions to the last, and most important, years of Harvey Milk's life. J. Edgar, in contrast, is a film without gravity or substance, often relying on single sentences to sum up a character motivation or Black's underlying themes. The movie has no real story arc, just an episodic series of events that neither builds tension nor insight. When the end finally comes, there's little sense of resolution, understanding or emotional impact.

Buried amid the whitewashing of Hoover's more odious political actions, the real advances in criminal science he championed at the FBI, and the deadly serious moments of melodrama and closeted homosexuality is the skeleton of a more interesting film. Black's script acknowledges the contradictory sides of Hoover's personality — his tough-guy public persona and his insecure, repressed psyche, his idealism and personal lapses in ethics — but never explores them with any depth, nuance or context.

This is particularly frustrating when it comes to J. Edgar's relationship with Clyde Tolson. For all the time the two spend together on screen, for all the compassion Eastwood brings to their partnership, the film's treatment is so restrained, shallow and safe that it undermines any real insight or emotional impact. As we watch these two characters reach their twilight years, the layers of fake make-up only accentuate the amateurish dramatic instincts on display.

Worse, Eastwood botches any connection his film might have made to today's attitudes about law, intelligence and the poisonous nature of secrets. Actually, botches is the wrong word. He merely ignores the chance to offer any social or artistic commentary on the warrantless government wiretaps, out-of-control budgets, ethical lapses and politically motivated actions of today's security institutions, preferring to keep his story in the hazy, "unenlightened" past.

From start to finish, there is little in J. Edgar that is worthy of Oscar attention. The performances are a bundle of overstuffed actorly clichés, the direction is torpid, and the writing is as clunky as it is unrevealing. Only its period set designs and cinematographer Tom Stern's lush and shadowy visuals stand out.

In the end, much will be written about DiCaprio and Hammer's unconvincing make-up. And the complaints will be justified, but not for the right reasons. Yes, the layers of age-spotted latex are unconvincing, but more importantly they act as a metaphor for the cheap emptiness that is trying to pass for meaningful historical drama.