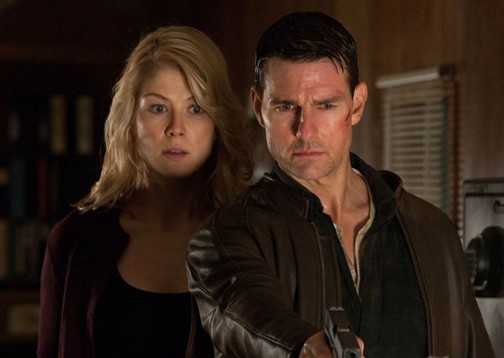 Timing is everything. Nothing makes that clearer than the opening minutes of Tom Cruise's violently disposable action movie Jack Reacher. In it a gunman roosts in a parking garage overlooking Pittsburgh's lovely riverfront and levels his rifle's scope on a string of unsuspecting targets. There's an executive-type sitting on a bench with a bouquet of roses, a pretty blonde, a rushed businesswoman, a mom, and young woman with a preschooler. As the crosshairs fall on the little girl it's hard not to feel a bit sick to your stomach. In the aftermath of the intolerable grief and violence that struck Sandy Hook Elementary School in Connecticut, watching five apparently random people get gunned down for our vicarious entertainment seems obscene.

But had director Christopher McQuarrie's (Valkyrie, The Way of the Gun) Jack Reacher opened two weeks ago it would have been regarded as just another gritty, fast-paced murder mystery — a little more brutal than some might have expected, but very much in sync with Hollywood's more recent thrillers.

Riding high on the global success of last year's Mission Impossible IV, the middle-aged Cruise has slated an impressive list of upcoming projects that seem determined to eclipse the negative effects of his personal life and keep him on the A-list. Author Lee Child's drifter vigilante character Jack Reacher (Ethan Hunt without the gadgets or teammates), with its nine dark-hued novels and dedicated fan base, is an obvious platform for Cruise to exploit. Nothing about the intended franchise is unusual or surprising, and it makes perfect economic sense for Hollywood's entertainment mill. The movie's thrills are hardly unique and it can be rightly argued that the opening assault is a circumstantial launching point for the deeper criminal conspiracy that follows rather than a descent into the lunatic actions of mass murderer. Reacher teams up with a defense attorney (Rosamund Pike) after evidence suggests that the Iraq War veteran arrested for the shootings has been framed. Predictable plot twists and chase scenes ensue in a stylish but otherwise old-school thriller. In many ways, Jack Reacher is a throwback to the macho crime movies of the '70s where no-BS anti-heroes dispensed street justice without hesitation or remorse. After all, when your villain is a creepy European with a sourball eye and missing fingers (played by documentary maker Werner Herzog) who's got time for a trial?

Nevertheless, the events of last week encourage deeper reflection on what we seek from the violence that is so casually depicted in today's movies. Instead of using the terrible murders of Sandy Hook as a reason to indict Hollywood, however, I think it offers us an opportunity to consider our own impulses and reactions. Many of the critics at the Jack Reacher screening I attended expressed an uneasiness with McQuarrie's masterfully directed opening scene — I suspect it was the literalness of seeing a child targeted by a gunman — but otherwise voiced little moral discomfort with a film that included protracted shoot-outs, chest-thumping vigilante retribution, and severe beat-downs (the most unusual of which has Reacher pummeling a man into unconsciousness with the head of another). In other words, the movie was business as usual, and their overall reaction was apathy.

And yet, amid the banal plot twists and brute-force violence, there is an intriguing and gut-wrenching subplot in Jack Reacher that sends Pike's character out to interview family members of the victims. McQuarrie highlights the terrible repercussions of violence, giving a name, family and face to those gunned down in his opening. Unfortunately, the moment isn't expanded upon and seems more oriented toward justifying Reacher's unlawful actions than challenging us to examine why audiences are titillated by realistic depictions of murder.

Conversely, this past fall saw a handful of crime thrillers that seemed more attuned to the moral disconnect between the violence and brutality we loathe in the real world but seem to embrace at the cineplex. Martin McDonagh's Seven Psychopaths and Rhian Johnson's Looper tried to address the consequences of violence even as they indulged in it. Andrew Dominik's Killing Them Softly, flawed as it was, attempted to juxtapose the casual yet destructive impact of white-collar and political crime against the actions of its boneheaded thugs. None of those films did particularly well at the box office.

Last week, the Pittsburgh premiere for Jack Reacher was canceled out of "respect" for the tragic events in Connecticut. Other violent film premieres followed suit, including Quentin Tarantino's Django Unchained. Defensive handwringing came next. Perhaps it's encouraging that both Hollywood and the public react like this, expressing recognition and even a bit of shame about their indulgences. What remains to be seen is whether we the audience are willing to experience films that make us reflect on why we are drawn to their mayhem, or instead continue to only reward those that cater to our most atavistic impulses.