The jazz star on his new discs and his hometown sidemen 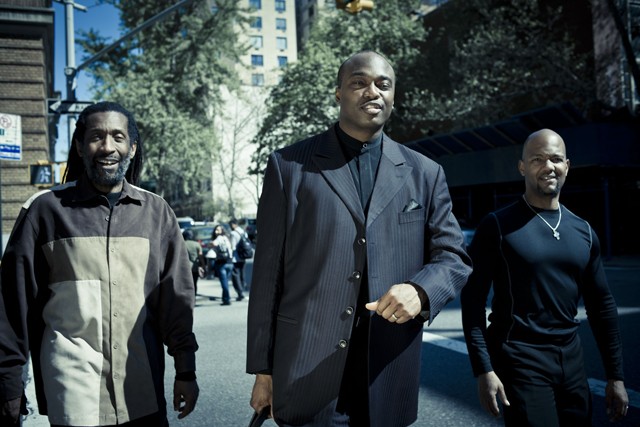 Detroit saxophonist James Carter is having a banner year. In May, the 42-year-old Carter released Caribbean Rhapsody: Concerto for Saxophone and Orchestra, which he debuted with the Detroit Symphony Orchestra in 2002. After a long recording career, it's Carter's first masterpiece. This year also marks the 10th anniversary of Carter's organ trio with drummer Leonard King and organist Gerard Gibbs, an occasion marked by At the Crossroads, the first full-blown blues and gospel-tinged project that Carter has been involved with.

For those unfamiliar with Carter's history, he grew up in Detroit the youngest offspring of a talented musical clan. He studied with a number of the Detroit elders, but first and foremost was middle-school saxophonist-educator Donald Washington, who ran a boot camp of a jazz band called Bird-Trane-Sco-Now! (as in Charlie Parker, John Coltrane, the Art Ensemble of Chicago's Roscoe Mitchell and the kids like Carter who were happening now).

Carter hit nationally and internationally in '93 with his debut as a leader, J.C. on the Set — and he's been a jazz star since. His smiling face of the cover of Downbeat in the spring was one sign of his heft on the scene. Recently, Metro Times caught up with Carter, who is still based in Detroit but travels widely.

Metro Times: Your organ trio is coming up on its 10th anniversary. What's the key to keeping a band together that long?

James Carter: It goes back to my musical father, Donald Washington. He always said longevity is the key. The longer a group stays together, the more it becomes of one mind as the relationship and musicianship progresses. Case in point, the classic Coltrane quartet albums Live at the Village Vanguard and One Down One Up. Those recording are great as the result of the band playing together for a while. Those recordings weren't some all-star hookup.

Carter: I fought tooth and nail with Atlantic Records back in day when they were trying to hook me up with New York-bred individuals. They'd say, "Why don't we try something different?" If I wanted a Detroit drummer, they'd say he played too much hi-hat. "You want that on the record?" I'd say, "Yeah!" That's something that can be worked out when the album is mixed. As far as letting them dial in some musician that I wasn't in tune with, [it] wasn't going to happen — especially when this is a document I have to live with for the rest of my life.

MT: Why are you so loyal to Detroit cats?

Carter: I think it's because I feel musically and socially connected to them. That definitely makes for a better and more cohesive project. As fate would have it, after the formation with my first group with Tani [Tabbal], Jaribu [Shahid] and Craig [Taborn] ran its course, that's when Leonard King and Gerard Gibbs came on board.

Carter: Gerard has grown a heck of a lot. When you look at Live at Baker's Keyboard Lounge [recorded 2001] up until now that's a heck of a lot of growth. And that's definitely come from us growing on stage, and also growing as men. I think he told me a long time ago that music and life don't separate. It's not only about us on stage; we check on each other; we check on our families, see if there's anything we can do.

MT: You guys are brothers.

Carter: Yeah, and it manifests itself in the music. I can definitely and truly say that.

MT: Does the current generation of Detroit jazz musicians get the same no-nonsense mentoring from older cats that your generation did?

Carter: Mentoring and the outlets have definitely disappeared. It's funny you mention that; I'm back here in Detroit working on my mom's place. I just put in a new furnace and an alarm system. I was rummaging and going through things. I came across old newspaper clippings from back in the day. Like, there was one from The Michigan Chronicle: Teddy Harris' band was down at Bomac's; Larry Smith and Ray McKinney were at other clubs; this was all within a week. Teddy's band was also playing at Dummy George's. We could either play with the group if you knew them, or you were a regular part of that group. That has mad changed within the past 10 years or so.

MT: You have a knack for putting a spin on tunes. Your take on Julius Hemphill's tune "The Hard Blues" is a prime example. When you put together an album like At the Crossroads, what do you look for?

Carter: I think this is the first time that you'll actually see us being billed as a group as opposed to James Carter. We all picked tunes and OK'd them. On my other albums, I came and said these are the tunes, this is how we're going to do them. We all picked stuff out on this one; it was more of a team involvement. We all brought individual things to the table.

MT: Has the jazz world changed much over the years you've been around?

Carter: Definitely, as far as packaging goes, being online and actually using online as one of the main routes to get jazz music out. I think it's a good thing, but you miss the connection with the people. Could you imagine someone saying, "Yeah I heard the Trane at the Vanguard live stream" and get that same effect out of hearing Trane live? My mom talked about the first time she saw Billy Eckstine at the Paradise Theater in Detroit and how his sound hit her body. You can't get the same effect listening to an artist streamed live.

The upside is, as a musician you're potentially getting a lot more people. Hopefully that will act as a catalyst to get them to the real thing and want to see musicians in real time. Jazz is still real-time music, it's real-time art, it's art of the moment.

The latest thing is how jam sessions are basically replacing group stints at jazz clubs. And that's good as far as what the promoters and club owners do, because they're getting off cheaper. Their patrons get to hear a whole lot of cats playing.

The bad part about that is the house band or the band that should've been playing their own repertoire [instead of jam session staples]. They don't get a chance to grow. And that's becoming the standard at most venues nowadays.

MT: Why did you make the Caribbean Rhapsody album with the Warsaw Symphony Orchestra instead of the DSO?

Carter: There were some logistic problems. It was the Warsaw Symphony that stepped up to the plate.

MT: Of the two new albums, which is your favorite?

Carter: They're both different children, and I've always said that about the albums. I've also said it about horns. They're different people and they do certain things for you. The concerto continues to grow for me; there's been mad growth on that piece.

MT: One of things I love about Caribbean Rhapsody is Roberto Sierra's compositions leave plenty of space for you to improvise and play your trademark cadenzas.

Carter: I remember showing the compositions to three different saxophone professors, and they said, "Who's going to be able to play all this?" Yeah, the piece has grown big-time, and Roberto has put so much harmonic and melodic information in there that I can keep feeding off of it for years.

MT: Michael Cuscuna produced Caribbean Rhapsody and At the Crossroads. How is it working with a legend?

Carter: Well, with him, he's part of one of the soundtracks of our lives: the stuff he used to do for Blue Note and Mosaic. Inside the studio, he opens up more possibilities.

MT: What are some of your future aspirations?

Carter: I have aspirations to keeping myself open to all possibilities.