Off the hook. James Linck’s rock and soul has expanded horizons for this year’s Blowout 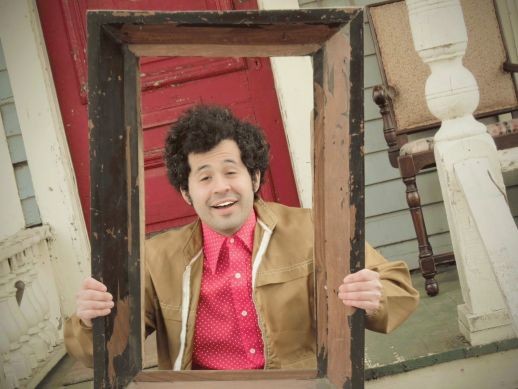 It was only last year that alt-soul band House Phone was tipped as one of the hottest acts at Blowout 2012 and throughout that year. Half of that prediction proved to be true. House Phone killed at last year’s festival — the band’s ability to summon the spirit of Arthur Lee & Love and mix it with a large spoonful of Detroit rock ’n’ soul going down a storm with fans, old and new.

And then it was over. When drummer Steve Boegehold decided that he wanted to concentrate on jazz, frontman James Linck was happy to bring in a new stickman and soldier on. However, when keyboardist Taylor Pierson hooked up with Jessica Hernandez & the Deltas, enough was enough.

“At that point I felt like I was trying to force something that wasn’t happening,” Linck says. “Our keyboard player was such an integral part of the band that it just felt like it was not the same band without him. At that point I just started recording myself, playing everything, kind of like I had done in the past for all the bands I had been in, with the intent of actually releasing, not making demos but making finished tracks by myself. I did that and I started striking up a relationship over the past summer with Chris Jarvis from Phantasmagoria, and we’ve been hanging out a lot and working on stuff together. He did a little bit of production work on some of my tracks, and I like the direction I’m going. I recorded an EP, six tracks, and after that was done, I played it to a couple of my friends and some people around here and I got a really positive reaction to it, so I figured I’d get some people together just to kind of do it live. Live, it’s mostly Chris with samples and beats and stuff, and we added a drummer and the bass player from House Phone. That’s what we’re doing now.”

Linck continued to work like hell on his EP, though the first recorded output made public was a split Christmas 7-inch with Passalacqua. Linck recorded an awesome version of Wham’s  “Last Christmas,” with Linck’s higher-registered voice adding new elements to the song without straying from the melody. Paradoxically, it’s both uniquely Linck and faithful. “That was fun,” he says. “I asked the guys in Passalacqua to do a split single with me before, and they asked me to do the B-side this time. I’m not particularly a George Michael fan, I just like that song.”

Linck admits that, due to a lack of input from band mates, his solo sound can be slightly more naïve than that of House Phone. “A lot of times I would come up with stuff in my demos that was a little stranger than a lot of musicians would come up with,” Linck says. “There are little short cuts I would take here and there, strange things that maybe wouldn’t sit right with certain people. When I bring that to the guys in the band, they smooth out the edges of things and make it more digestible. Now, that’s not happening. It’s about whatever stupid ideas I have. It’s definitely more naïve, but it’s a little bit more me too.”

The singer started writing his solo EP last July and was done tracking it by the fall, then he spent about a month figuring out how to make the songs work in the live environment and, in December, he played his first show as a solo artist. “We’ve played about seven shows so far,” he says. “We played a really good show on Friday, opening for Jessica Hernandez & the Deltas at St. Andrew’s Hall. There were a lot of people there and we played really well. Almost all of them have been really cool. The interesting thing about this is that, with House Phone in particular, the guys had so many other projects going on, whenever somebody asked me to play a gig, I’d have to coordinate this stuff with different people who were constantly playing live music almost every day of the week. We had a lot of things that we couldn’t do and a lot of things that people begrudgingly did. Now with this setup, me and Chris can do the show by ourselves. Just a laptop, singing, and I play a bit of guitar on the side. Basically, I accept any gig that I want to do and fill in the blanks after the fact. We’ve done shows with me, Chris and a bass player, and we’ve done shows with a drummer, me and a laptop. Whoever can make it out, we make it work.”

This year, Linck plays the Blowout for the second year running, obviously for the first time solo. His set is during the second weekend, the debut Ferndale half of the festival. His memories of last year are such that he can’t wait to do it again, albeit with different people around him and in a different city. “It was a great show,” Linck says. “I remember that I was on the verge of catching a cold and I was a little nervous about it because I can’t really sing the falsetto stuff very well when that’s happening. I just got some tea as opposed to whiskey before the show, and it worked out really well. We had some friends fill in and do some backup vocals, which I think was the first time we tried that. We had a good reaction, had a good crowd there, and it was cool.”

So for this year’s set? “We haven’t talked about it too much,” he says. “I know we’re out in Ferndale at the Loving Touch. I have a number of duets with people, aside from the record that’ll be coming out. I have a song with rapper Doc Waffles and another track with Lianna [Vanicelli] from Phantasmagoria. We might try to do some alternate versions, some remixes, probably perform all those duets. Back when House Phone was going on, there was a House Phone track called ‘Fire Hydrants’ that started out as a collaboration between me and Jarvis. It’s weird because the original version was electronic and I rearranged it into a band version for House Phone. It usually goes the other way around. Now that we have an electronic setup, we’re probably going to start performing that one in its original form. This year, except for my showcase, I don’t really know who else is playing. We have Passalacqua, Flint Eastwood, and also ‘High Vibrations,’ which is a monthly party Jarvis does at the Loving Touch which features a bunch of local producers doing instrumental sets. I don’t know if that’ll be a group of producers doing a couple of tracks each.”

When the Blowout has come and gone, and everyone has spent a few days recovering, Linck wants to take his solo act on the road. “I’m super-open in my schedule right now,” he says. “I would love to tour the Midwest in the spring and summer. So many things are hanging because I’m not positive when the record comes out and it’s kinda stupid to tour without a record. Hopefully we can get something out here. It’s supposed to come out on Five Three Dial Tone Records. They’ve had some issues, so the release has been pushed back. I’m hoping at least a CD can come out by Blowout so I can start pursuing some touring opportunities.”