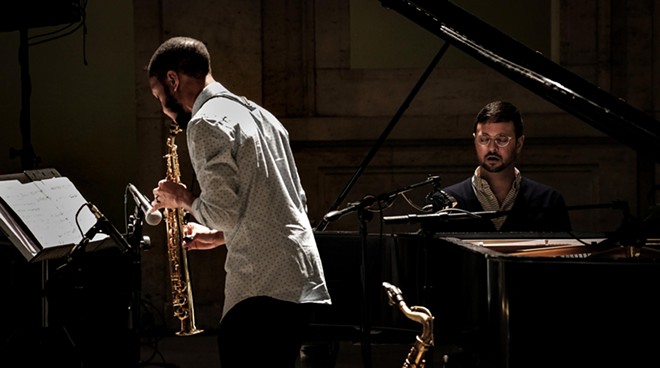 A beautiful piece of jazz is similar to perfectly constructed prose in that it carries the audience on a crest of emotion, at once making us feel in our hearts and see in our minds the truths that the music or words wish to convey. It is in the spirit of this similarity that jazz duo Balance have joined forces with celebrated author Bill Harris and distinguished drummer and improviser Gerald Cleaver for the interdisciplinary collaboration "I Got To Keep Moving," named for Harris' freshly released book of short stories.

Balance is made up of local musicians Marcus Elliot (saxophones) and Michael Malis (piano). The two have a long history performing together in various settings. In 2015, they stripped things down to create Balance. With only two players, a more intense sense of focus is inherent to the work. As a result, Malis and Elliot's sonic relationship has been sharpened to a very fine point. Together, as improvisers and composers, they speak in a language of subtleties and sensations, inviting listeners to join them on a journey that is as free and open as it is intimate and soulful.

On the literary side of things, we have Guggenheim Award recipient and Kresge Foundations' 2011 Eminent Artist Harris, a fascinating figure in Detroit's cultural community. A playwright, poet, author, and retired Wayne State professor, his plays have been produced over one hundred times across the country and he has authored several volumes of work in a variety of narrative and critical forms.

The text that is the basis of this collaboration, I Got To Keep Moving, is a series of interconnected stories told in three parts that span over a century. Beginning in the 1830s on a plantation and driving forward into the mid 20th century, the stories largely focus on the inner and outer lives of black characters and families, though some white characters are central as well. One goal of this book, Harris says, was "to understand what it meant to be enslaved on the one hand and enslaver on the other hand." The stories are emotional juggernauts, as haunting and heavy as they are adroitly revealing of the human condition. To put it another way, they are a perfect conduit for the intuitive improvisations that Balance does so well.

To complete the ensemble, drummer Gerald Cleaver — the group's first choice for the project — was asked to participate. Happily, he agreed. "He's a big influence on both of us, and a phenomenal drummer and composer," Elliot says. "The combination of having [Harris and Cleaver] in the same room was like, 'We gotta ask. We've got to do this.'" Cleaver is a native Detroiter but now lives in New York, bringing an additional noteworthy component to these performances. A jazz stalwart in his own right, Cleaver has performed with virtually everyone under the jazz and creative improvised music sun, including Henry Threadgill, Roscoe Mitchell, Reggie Workman, and Muhal Richard Abrams.

"The thing I have always been struck by with Gerald is that he has all the freedom of a free improviser and all the groove of a jazz musician," Malis says. "He's really unique in that sense where it seems like he can be coming from the perspective of deep rhythm, but with an ability to be extremely free and make really agile changes quickly."

Harris brings his own love of jazz to the collaboration. He's been a fan of Elliot and Malis for years. "At some point, I mentioned after a concert that I would love to do something with them and left it at that. Lo and behold, a couple years later, [they] asked more specifically if there was something we could do," Harris says. In November of last year, I Got To Keep Moving was released, and he gave them a couple sections to work with. This January the project began to really ramp up, and now here we are.

As Elliot tells it, Harris' writing contains a great deal of rhythm. Harris himself says, "I love working with musicians. I've said many times, if I had my choice to do it over again, I would probably try and be a musician. But short of that, I am very conscious of music as I write, and always try to use music in the writing in poetic ways and every way that I possibly can."

"You can tell that he's a poet, too," Malis adds. "Even when he's writing prose, there's a thing about it that feels very poetic. [While] writing the music, Bill's words or speaking parts [felt like] a fourth instrument. It really feels like a quartet rather than a trio with narration. What we've been trying to do with our music is to find a way to center and focus his words, more than anything. There are obviously just instrumental sections or sections where it's just words, but the instrumental sections are illuminating or articulating the things he's written. When we're all making sounds together, his words are really the thing that's carrying us forward."

"The notion of what work is, is in almost every story," Harris says. "What work says about who you are as an individual and that relationship. How people support each other, whether in a familial situation or when strangers come together. What it means to have to work with somebody in order to accomplish a goal. It's all those kinds of things on a human level."

This idea of working with others to accomplish a goal is, of course, innate to collaboration, and certainly the collaboration that has taken place between himself and the musicians. The performance is "about the four people that are gonna be up there, and what they're bringing to the table," in Elliot's words. "It's going to be different every time, even if everything was written down. The experience of witnessing that is what makes it so special."

Malis adds, "In an ideal world we want this to be a situation where we, and everyone on stage, can show up and just be ourselves. These compositions are a forum for that and a forum for the text. Improvisation is the center element."

"I've never done anything like this before," Elliot says. "I'm really excited to see what happens."