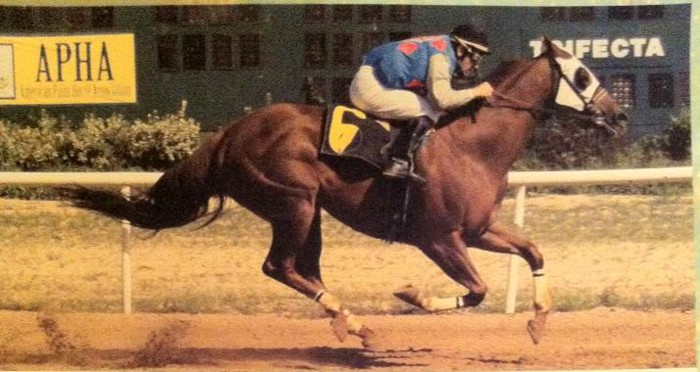 The last time Hazel Park hosted a thoroughbred race, Coleman Young was in the Manoogian, Ronald Reagan was in the oval office, and the Detroit Tigers were the champions of baseball. The track, which opened in 1949 on the site of an old garbage dump, has been used exclusively for harness racing since 1985.

With Michigan’s horse racing industry in a steady decline, Hazel Park is hoping it can buck the trend. So after 30 years in exile, the ponies are coming back to the old “bull ring” at 10 Mile and Dequindre.

We recently hit the track to catch up with veteran jockey Mike Holmes, whose father, the late Donny Holmes, won more than 2,000 races at Hazel Park. On Friday night, Mike will race there for the first time in his career.

Metro Times: How long have you been doing this?

Mike Holmes: I got interested in riding when I was 16, did it for about four or five years, then got out of it. I got back in it when I was about 26 and decided I wanted to race. Since then I’ve been everywhere: Indiana, Ohio, Illinois, Canada.

MT: How old are you now?

Holmes: Yeah, I grew up in Oak Park.

MT: You ever race at Detroit Race Course?

Holmes: I only galloped horses there. But I spent more time there than I did here [at Hazel Park]. What I really dug about DRC was there was this ladder that went up to the roof. When I was a kid, I used to go up there and watch the races with the jockeys.

MT: Where was your first race?

Holmes: Mount Pleasant Meadows in 2002. My first horse broke out of the gate with me, took a left turn, and started bucking.

MT: Then what happened?

Holmes: We ran dead last, but I stayed on him.

MT: How long before you won your first race?

Holmes: I won it the same year I started. I won the biggest race at Mount Pleasant my first year.

MT: What kind of race was it?

MT: What’s your favorite track to ride at?

MT: How does quarterhorse racing differ from thoroughbred racing?

Holmes: They’re a little smaller, stockier, just built for speed. A quarterhorse race is on a straightaway. It’s a lot about the break. They break out of the gate twice as hard, three times as hard as a thoroughbred. Three or four strides and they’re full speed — 50 miles an hour, and you’re just like a rocket down the racetrack.

MT: So will there be quarterhorse racing here, too?

Holmes: I’m not sure how that’s all gonna work out. It depends on the number of entries. You have to have a certain amount of betting interest per race to get a quarterhorse race to go.

MT: What’s the top speed for a thoroughbred?

MT: What’s the most a jockey weighs?

Holmes: A quarterhorse jockey, 120. A thoroughbred jockey … as far as I’m concerned, 118 is light enough nowadays. There are still tracks out there that want jockeys to be around 110 pounds — and that’s with your tack.

MT: Give us the tale of the tape.

MT: Is that your riding weight?

Holmes: I wanna get down to 115 by opening day.

MT: My dad used to call thoroughbreds “the ponies.” I hear players here call ’em “the runners.” You ever hear ’em called anything else?

Holmes: Old school was “short necks” for quarterhorses and “long necks” for thoroughbreds.

MT: So what do you do when you’re not racing?

MT: What are you doing to stay in shape?

MT: How much longer you think you’ll keep racing?

Holmes: As long as my body will hold up.

MT: You ever taken any spills?

MT: You wear a mouthpiece or anything?

Holmes: Just a helmet and a vest — a hard foam vest underneath the silks.

MT: Your dad’s something of a legend at Hazel Park.

Holmes: Yeah, in fact, he was the first jockey to win 100 races here.

MT: Did he ever get to see you race?

Holmes: Only on tape.

MT: What do you think he’d say if he knew you’d be riding at Hazel Park after all these years?

MT: How does Hazel Park compare to Mount Pleasant?

Holmes: I think it’s gonna be a big step up. I just hope the people come and support us.