A tribute to Burt and Bert that's inert as dirt 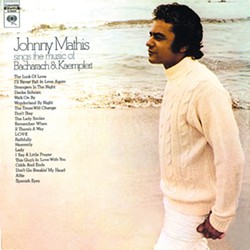 You can never get away with double-disc concepts like this anymore — two long players, each devoted to two different composers whose name is Burt. Or Bert, as Bert the K spells it. Maybe before the bottom fell out of the coke-sniffing record industry in the late '70s there was a Johnny Sings the Hits of Hamlisch and Gaye that got tabled because someone at Columbia emerged from a line on a mirror, saw his reflection and decided a two-Marvins tribute set was too stupid to live.

And now heeeere's Johnny! For years, Frank Sinatra called Mathis "the African Queen," but is that any defense for messing with the lyrics to "I Say A Little Prayer"? "The moment I wake up/ Before I shower and set up" — aarrggh! Could it have killed Johnny to find another rhyme? I mean, even in the movie My Best Friend's Wedding, Rupert Everett sang "before I put on my makeup" and he's not a ... oh, never mind. —Serene Dominic