Jumping Off the Cliff 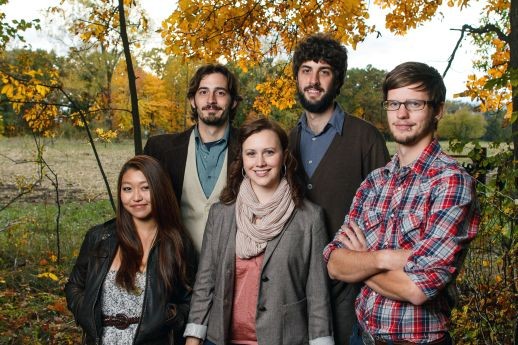 Grand Rapids, hometown of the fast-rising folk-rock troupe the Crane Wives, might be in the same state as Detroit, but the 160 miles separating the cities makes it difficult for bands to bridge the divide. As a result, an alt-indie scene has developed in Grand Rapids that very much has a life of its own. At Blowout this year, the Crane Wives are proudly representing the state’s second-largest city.

“Three of us got together and tried to play blues, and then the ladies in the band got together and became a folk duo, and then those things melded together,” Rickabus says. “We formed in August of 2010, and the idea was just to take the songs that Kate and Emilee were writing and kind of build folk music around it. We’ve all been into what I like to call the ‘new acoustic renaissance.’ We really felt like we were resonating with the kind of resurgence that organic and acoustic music has been having, especially in the face of a lot of overprocessed stuff. I think we’re excited about getting together and creating something organic, and letting it flow but letting it be based off of the songwriting of the ladies in the band.”

The drummer added that the current Grand Rapids scene is phenomenal. “It’s incredibly cooperative as opposed to competitive like we hear a lot of music scenes are,” he says. “There’s a huge network of people who just want to support each other here. You hang with other bands, and they’re always working together for a bigger purpose. It’s a lot of fun that way, because we all get to do our things, help one another, and he have an awesome local radio station here in west Michigan that is incredibly supportive. We love it, man. We get along with everybody and have a great time.”

The band has a sound that blends the energetic folk-rock of Jethro Tull with a near punk vibe, plus a touch of the contemporary (Mumford & Sons, etc). “Some people have called it folk, others have called it folk-rock, others still have called it Americana,” Rickabus says. “It’s kind of a big blend of all those type of things. The word ‘indie’ flies around a lot and I love what that represents, though I’m not sure it’s used correctly all the time. The elements that we like to mix are bouncy rhythms ¾we like to make people dance ¾but the music is really focused on, not only the lyrics, but also big three-part harmonies. There are a lot of songs where all three of us are singing. We really get excited about having fun with three different voices. The banjo is the lead color instrument — makes it bouncy and fun. Our bass player, Ben, writes some really melodic bass lines. Sometimes it’s hard for us to describe, but it’s definitely a folk-rock Americana type thing.”

Rickabus says the band’s best show so far came courtesy of a beer company. “We have two albums out and both of our CD release shows have been pretty hard to forget,” he says. “We had one at Founders Brewing Company for our first album, and at the Intersection [venue] here in Grand Rapids for our second album. Those have always been such an epic celebration. Also playing the main stage at Wheatland Music Festival [held annually during September in Remus in Mecosta County], and playing Founders Fest in front of Founders Brewing Company, because that place is like our home away from home and it’s great playing on that epic stage.”

And the worst? Every band has its nightmare gigs. “We’ve definitely played to some empty rooms,” Rickabus says. “I won’t call out any venues so as to not piss anybody off, but we’ve definitely played to empty rooms with all the experiences of traveling far. Then it becomes a paid practice. We’re so lucky with our turnouts though, and we’ve been really fortunate with how much support we get, even on the road.”

Rickabus, a super-enthusiastic and extremely likable dude, says they’re psyched to experience their first Blowout festival. “We definitely play Detroit less than a lot of our other Michigan markets, which is kind of funny because four out of the five of us are from the east side of the state, around Detroit,” he says. “It’s not that often that we get to go over there, but we’re looking forward to Blowout.”

THE CRANE WIVEShave nearly enough material to fill two albums, all of which the band is bringing with to Ferndale this weekend. “The bass player and I did all of the audio engineering, recording and producing of the albums ourselves,” Rickabus says.

“I was more on the creative side of the production and assisting Ben with the engineering,” he continues. “He’s a fantastic mixer. The first album came out in May 2011, Safe Ship Harbored. That has more of a mellow vibe, then we got really excited about being live and dancey, so our second album, The Fool in Her Wedding Gown, ended up getting a little more rocking, even though we still don’t have an electric guitar in the band. It’s all acoustic, but I feel like there’s some rock ’n’ roll happening.”

There certainly is. The band manages to bring some truly riotous, crazy energy to its acoustic music, and it is that ability which the guys hope will help them quit their other jobs. “We’ve been slowly weaning ourselves off of our day jobs,” Rickabus says. “We all have stuff that we do on the side for extra income besides income from music, and Emily is the only one who technically still has a full-time job. We all pick up freelance work here and there and we’re hoping to, by the end of this year, be completely full time with music. It’s kind of a jumping-off-the-edge-of-a-cliff moment right now.”

You have to hope that he’s right. Rickabus and his bandmates live for their music, and they’re happiest when in a studio or on a stage. “Sometimes you get an amazing amount of satisfaction when you’re starting to put together a song and something just clicks,” he says. “The five of us get so excited, and sometimes that’s when we’re most proud, when we can share something together and just be so excited about it. Then obviously there’s the experience of playing a venue that you always dreamed of playing. I think that for us was Founders Fest. We’ve all gone there, drank and watched bands so many times, so playing on that stage was pretty surreal. It’s worth mentioning that both feelings are incredible, and you have to have a balance of those two to be happy as a musician.”

So what will the Crane Wives be bringing to Blowout? “We are going to be doing mostly original and a couple of fun covers — we’ve been adding some new covers to the lineup and we’re definitely going to bring our danciest material and try to get people moving,” Rickabus says. “After Blowout, we’ll be traveling around at the weekends, trying to make the transition to full time. We did two records in two years, which ended up being a lot of work. We made the conscious decision not to make a full-length album this year and just kind of jam. We’re really looking forward to traveling around, entertaining people and jamming to see what we come up with for the future.”

We wait with bated breath.