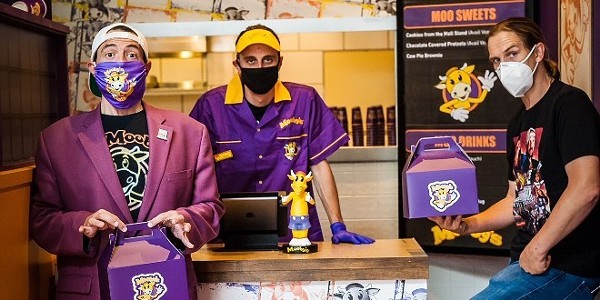 Calling all motherfuckers, ball-lickers, and anyone who may be stuck in 1999 — it's time to get some Hater Totz, yo.

Filmmaker, wearer of backward caps, heart attack survivor, and the dude who attempted to rescue Marvel comics legend Stan Lee (R.I.P.), Kevin Smith, is taking what he calls a "fake fast-foodery" inspired by a "bunch of dopey movies" he made from screen to street for some IRL eats.

Mooby's made its movie debut in Smith's 1999 film Dogma (or as we refer to it, "the movie where Alanis Morrisette plays god") and made appearances in Jay and Silent Bob Strike Back, Clerks II, and, again, in 2019's Jay and Silent Bob Reboot. In other words, Mooby's is a major player in the KSCU (that's Kevin Smith's Cinematic Universe), and starting Tuesday, July 6, Mooby's will be making a cameo at Detroit's Tin Roof for a two-week engagement.

The McDonald's/Burger King-inspired fast food joint will transform Tin Roof into a Mooby's from the films, as well as a Jay and Silent Bob merch shop, and staged photo ops for fans of Smith's offbeat filmography.

As for the menu, which is in collaboration with L.A. chef Royce Burke of Secret Lasagna, Mooby's Detroit pop-up will feature food straight from the films, like "Hater Totz," the "Cow Tipper," "Cocksmoker" chicken sandwiches, a "Lasagna Sandwich Reboot," "Cow Pie Brownies," and cans of Mooby's Lager, which is actually some brew from Detroit's Atwater Brewery, Eater Detroit reports.

And, there's some good news for vegans, as 50% of Mooby's pop-up menu is vegan-friendly, including many of the loaded meat sandwiches which can be made with Beyond Meat. Smith famously converted to veganism in 2018 following a massive heart attack. (The dude's heart was 100% blocked. Thanks, cholesterol.)

Tickets are $29 per person and include a Mooby's Meal, which comes with a Moo Main and a Salt Lick Side, with additional items available for purchase in-person or via preorder. Tickets are on sale as of Monday, June 21, and can be purchased via exploretock.com/moobyspopup.