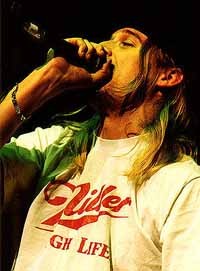 From his early days as the "Early Mornin' Stoned Pimp," spinning and rapping anywhere and everywhere at underground parties in and around Detroit, to his current, multi-platinum-selling status as "Pimp of the Nation," Kid Rock has always laid his own blueprints for hip-hop and rock 'n' roll success. Mixing a low-key DIY ethic with impeccable mic skills and savvy artistry, the Detroiter known as Bob Ritchie's much-deserved breakthrough hit Devil Without A Cause has brought the spotlight on the man himself and the city he calls home. As one of the shock troupes (which is another way of saying vanguard) of the rock-rap nation, get set to see Rock on the musical landscape – not only in Detroit, but 'round the world – for quite some time.