A conversation with William Friedkin 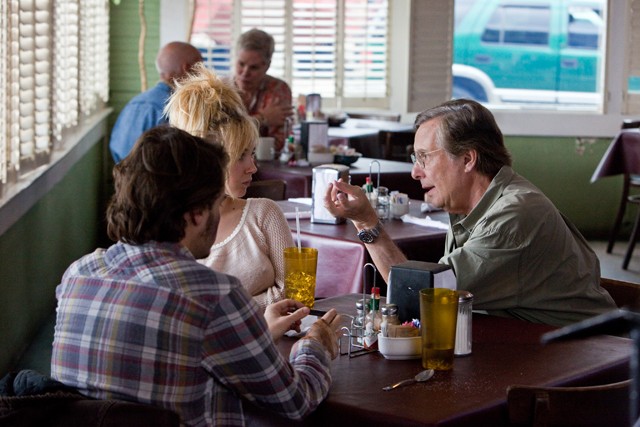 Winning the Best Director Oscar for The French Connection (which took home five statues) in 1971 catapulted William Friedkin into the A-list of Hollywood directors. He followed it up with The Exorcist, which grossed (and grossed out) many millions and cemented the filmmaker's place in cinema history. But unlike his contemporaries (Scorsese, Coppola, De Palma), Friedkin's output has never matched his ferocious, in-your-face sensibility. Over 45 years, the director has only made 16 feature films, and none, despite their obvious ambitions, made the popular splash of those early successes.

Lately, however, the now 76-year-old director has been enjoying a cinematic comeback of sorts. His two most recent films have teamed him with Pulitzer-winning playwright Tracy Letts, allowing Friedkin to demonstrate his wickedly dark sense of humor, uncanny ability to draw out terrific performances from his cast, and ever-brazen approach to violence. Killer Joe opens Friday, and it's as twisted, nihilistic and depraved a film as you've ever seen. It also happens to be pretty terrific.

Friedkin, in an extended phone conversation — here edited and condensed — exhibited some of the same feistiness and thoughtfulness seen in his movies.

Metro Times: Your two most recent films, Bug and Killer Joe, teamed you with playwright Tracy Letts. Those plays depict a rather desperate strata of lower-class America. You've said that you and Letts share a common view of humanity. What is that view?

William Friedkin: I think that's a superficial characterization of what he's doing. He's obviously writing about people who are trapped by their own greed and in a situation where they will do almost anything to get out. ... Tracy has found an absurd vein of human nature that attracts me as a filmmaker. The characters in Killer Joe may live in a trailer park, but a lot of their problems are problems I saw growing up in Chicago in a neighborhood that wasn't poor. People will do absurd things to attain their dreams.

Friedkin: I've only made 16 films in about 45 years, and they've all come from different sources. But all of them share a kind of claustrophobia. Think about The Exorcist. Well over a third of that movie takes place in one room. Fifty percent or more takes place in a single house. So, claustrophobia is something that gives you a chance to examine people in highly dramatic situations where they have no escape. There is no more of a challenge directing a film that comes from a play than any other source. And, frankly, there's too much mention of that these days. Some of the greatest films ever made came from the theater. Casablanca was a play called Everyone Comes to Rick's.

MT: Still, having watched quite a few adaptations over the years, it's always clear which directors can transcend the stage origins of their films and which seem constrained by it.

Friedkin: Well, how many filmmakers transcend the comic books from which they derive their films?

MT: Great point. Your career took off in the 1970s. Do you think critics who pine for that so-called "decade under the influence" are just waxing nostalgic or was there something really revolutionary going on in film?

Friedkin: I'm not sure it was revolutionary, but it certainly was a change from what was going on before. I think it was a much more adventuresome time for both filmmakers and audiences. It seems to me that audiences today want what's familiar. In the '70s, that wasn't the case at all. Audiences then wanted fresh experiences. And there was plenty of that.

MT: In 2000, The Exorcist was re-released with additional footage. I wonder what you think about filmmakers who go back and tinker and revise their work?

Friedkin: The 12 minutes I added in the re-release was what I originally had in the film in 1973. And I cut those 12 minutes, without any pressure from the studio, because of pace. I wanted the movie to be two hours or less. I had an innate belief, which I still have, that less than two hours, like an hour 40 or 45 minutes is enough — unless the subject is something like Lawrence of Arabia. And even there I see a lot of padding. But it always bothered Bill Blatty, who wrote the novel and screenplay. He always missed that footage. And for many years he urged me to think about restoring the footage. When Warner Brothers decided to re-release the film theatrically, he persuaded me to look at the footage, and I thought this stuff isn't bad at all.

MT: So, is revision fair game? For instance, I think of Ridley Scott's constant tinkering with Blade Runner.

Friedkin: Well, that movie was taken out of his hands.

MT: Yes, but since restoring it he's cut, like, three different versions.

Friedkin: You know there's an apocryphal story about the post-impressionist painter Pierre Bonnard. And Bonnard is alleged to have gone into the Louvre where his painting hung. And he went to the place where one of his paintings was hanging with a palette and some paints and a brush and he started painting over his painting. And the guards immediately grabbed him and took him to the security office of the Louvre and they said, "What the hell are you doing?" And he answered, "But I am Bonnard, this is my painting. I feel that I am improving it." And they said, "Monsieur Bonnard, it's hanging in the Louvre, it's good enough." I understand that impulse. I'd venture to say that you'd like to go back and rewrite some of your columns.

MT: Oh, absolutely. I'm paraphrasing here, but Alexander Payne said in an interview that most directors only have about 10 best years in them, that after that whatever they produce is probably going to be hit or miss. You've only had 16 films. Do you see any truth in that statement?

Friedkin: Well, Billy Wilder went on for at least 30 years. As did John Ford. You can't generalize. How many years was their work valid? Jesus, I don't know ... I suppose that if you're a painter or filmmaker or writer there's a given amount of time when you're in tune with the zeitgeist. And then there comes a time when you're not, when the zeitgeist changes.

MT: At the end of Killer Joe, Gina Gershon's character has a rather humiliating encounter with a chicken drumstick. When I screened the movie at the Toronto Film Festival a woman seated near me snarled that the film was misogynist. I was tempted to whisper to her that misanthropic might be more accurate. Is either response valid?

Friedkin: Well, I have not heard that complaint. Maybe one or two times out of the literally thousands of Twitter and Facebook comments and articles. Is it a valid comment? I guess so. [The scene] certainly wasn't intended to be. Of course, the film hasn't opened widely yet so I can't determine if that's going to come up again. It may.

MT: Do you think the graphic nature of the scene might inspire such a reaction?

Friedkin: I don't make a film expecting people to have a negative response to it. But I do make films that are challenging to me as subject matter. And I imagine that'll push a lot of audience buttons as well. The ratings board certainly thought the film was too violent. I actually agree with them. [The film is rated NC-17] It is a very violent film. I can't be responsible for people's reactions.