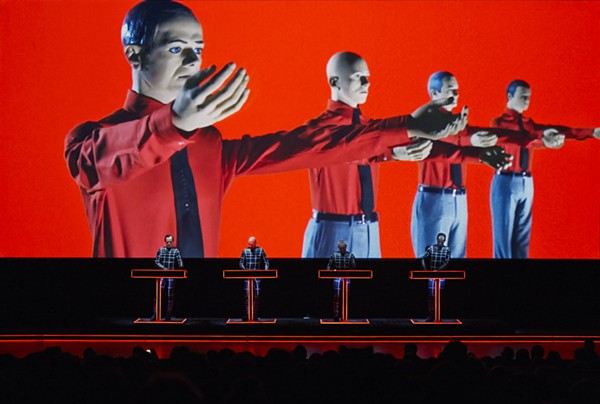 Today, honorary Detroiters Kraftwerk announced the imminent release of a multi-disc live set in several formats (see below) which captures the 3-D sets that enchanted Detroiters when they performed it here, first at the Masonic in 2015 and then at Movement last year. We were stunned by how gorgeous the show was. Get this now for the completist fan in your life.

"Due out May 26th, the new collection features full album performances of eight Kraftwerk albums: Autobahn, Radioactivity, Trans Europe Express, The Man-Machine, Computer World, Techno Pop (previously released as Electric Cafe), Tour De France, and the 1991 remix compilation The Mix. The set will be available on various formats (DVD, vinyl, CD, digitally, and streaming platforms), as well as Blu-Ray, which comes accompanied with a 236-page book. For those fans who perhaps want a more condensed experience, there will be two shortened versions of the release. Featuring just an assortment of tracks from those eight LPs, these versions will come out on Blu-Ray, DVD, and double-vinyl."