Po and the Furious Five come out swingin' 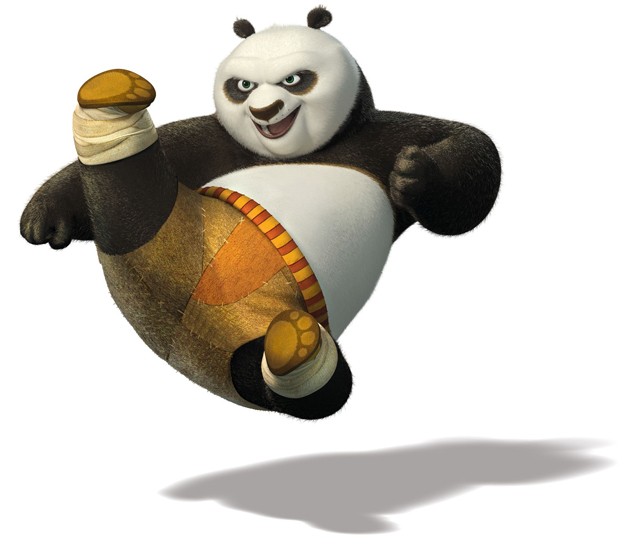 "Your story may not have a happy beginning. But look at how it turned out."
—Kung Fu Panda 2's soothesayer

Who'd a thunk it? May is nearly wrapped up and my favorite tentpole flick so far stars Jack Black. Though I've always had a soft spot for the comic actor, the last few years have been a wasteland of desperate and decidedly unfunny star vehicles, each more dire than the last. 2008's Kung Fu Panda was the shining exception, a sweet-natured, rambunctious, and beautifully crafted film that made terrific use of Black's self-deprecating talents while elevating Dreamworks' stature as a CG animation house. The sequel, if you can believe it, builds on and deepens those virtues.

Though not quite as fresh or whimsically funny as the original, Jennifer Yuh Nelson's fleet-footed follow up trades giddy yucks for heart and character, all while dazzling us with exquisitely rendered images and delirious action scenes.

Po (Black) has settled into his role as the Dragon Warrior, when his Red Panda mentor, Master Shifu (voiced by Dustin Hoffman), offers a new challenge to him: find inner peace. It's a lesson far more important than Po realizes. Unfortunately, there's a new threat to China's peace, the evil peacock, Lord Shen (Gary Oldman), has unleashed a weapon of mass destruction, threatening to doom kung fu forever. Po and the Furious Five (Angelina Jolie, David Cross, Lucy Liu, Seth Rogen and Jackie Chan) are sent to defeat the murderous villain, not realizing that Lord Shen holds the key to Po's forgotten (and tragic) childhood.

Taking adult themes like adoption, identity, trauma, and revenge, screenwriters Jonathan Aibel and Glenn Berger scale their darker instincts to family audience size, without compromising on emotional resonance or impact. Confronting then letting go of the past is the message behind Kung Fu Panda 2, and itgoes to surprisingly mature places without ever losing its ability to entertain. Po's journey of self-discovery is filled with a few standout jokes, plenty of dramatic intensity, and the kind of grace notes that honor China's ancient Buddhist beliefs.

More impressively, Nelson and her team pay loving homage to their source material, creating wow-inducing fight sequences and a plot that could've come from any of a dozen Hong Kong flicks or Chinese epics. Fists and feet fly with inventive energy (a gag involving a dragon street puppet is terrific) and Po's final showdown against a fleet of cannon-laden dragon boats is impressive in both scale and execution.

The supporting voice talent — Chan, Jolie, Rogan, Hoffman, etc.— are expressive but tend to clutter the story, having a lot less to do this time around. Jean-Claude Van Damme shows up to utter a few lines while Michelle Yeoh grabs the spotlight with her soothsaying goat. Most importantly, the wonderful James Hong returns as Po's noodle-obsessed father goose.

Kung Fu Panda 2 is so confidently made, visually layered, and emotionally affecting, that Pixar — with Cars 2 opening next month — may find itself unexpectedly outclassed. Given the quality of the first Cars flick, I'm predicting the CG animation throne is up for grabs this summer.