Kynzi is the vulnerable Detroit diva we've been waiting for 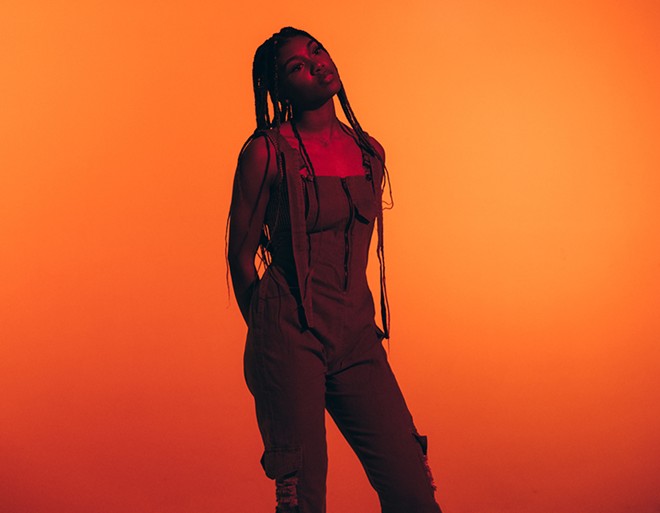 Kynzi, the soon-to-be 21-year-old Detroit singer whose 2020 single "Siren" is like if Beyoncé and Evanescence popped into Chloe x Halle's studio, sometimes talks about herself in the third person, and for some reason it's not weird. Like, at all. In fact, it's almost like she's preparing to solidify her standing in what we believe to be imminent diva-dom.

"I used to feel like she was an alter ego," Kynzi says. "She's really more like an extension of everything that I am, but magnified. Confidence, magnified. Sex appeal magnified, like, enchantment — everything's up to a hundred. And I feel like, especially as a Black woman, they expect you to tuck your tail between your legs and not make a sound and be seen and not heard. So, actually like [with] Kynzi, it's just a whole bunch of 'I don't care, I'm going to do it how I want to do it,'" she says. "She's extremely glamorous. She's such a diva. But she's also vulnerable, and she's honest, and she'll say the things that she feels she cannot say. She's just another part of me."

Kynzi, born Kyndal, says she's been singing for a long time "but didn't start sounding good" until she was 16. At some point, while attending Detroit School of Arts High School, where she became operatically trained, she realized the classical training had stripped her of her natural voice. Her natural voice, as heard on her three singles, "Changes," 2019's "Told You So," and the aforementioned "Siren," is capable of running vocal laps à la Ariana Grande — with whom she is personally infatuated — and she can hit Beyoncé-inspired depths, thanks to an early introduction to the BeyHive via her older rapper sister.

But, of course, in true Kynzi fashion, there's a whole lot of Kynzi in there, too. As rich and seasoned as her voice is, Kynzi is quick to make a confession about where her music comes from: A lot of the time, she makes shit up.

Something that did happen to Kynzi, something she refers to as being a special learning experience, was participating in an artist residency at Assemble Sound, the Corktown-based artist development and recording studio. As a 2020 resident, she was introduced to industry experts, as well as other Detroit artists, some of whom were in the same place in their career as she found herself, while others were at more advanced stages.

"It makes you feel like, OK, maybe I'm doing this right. It doesn't look like what that person is doing. But it doesn't mean it's wrong," she says. "Coming from an academic family — like, my mom is a doctor, my dad is a teacher — there's nobody who had the kind of creativity that I had. They didn't really have outlets or mediums to express themselves creatively — like, everything is numbers with them. So I really didn't have any help or a blueprint. What Assemble provided was a little bit of structure, a little bit of guidance, some do's and some don'ts. It just was a big learning opportunity. Like, I had so many questions, and Assemble provided a lot of answers."

When talking about her career, Kynzi does not mince words. "I want to say this humbly, but the demand for me is there." She's just not sure how she wants to go about it.

In order to elevate herself to the next level, Kynzi knows she needs to release more music — a lot more. Her three singles over three years are the result of being a hyper-sensitive perfectionist. (That's Kyndal, by the way.) She also needs to get her vision out of the way so she can feel more comfortable making creative compromises later on.

"I've been putting off a lot of work relationships simply because I know that my creative liberty will be stifled," she says. "And that's kind of where I am. I've just been recording and doing as much as I can. So that when I finally get to a place where I'm working with someone else, and they have a different artistic vision for my career, I can comfortably adapt to that, knowing that I've already done everything I want to do by myself."