La Pecora Nera is a slice of Italy 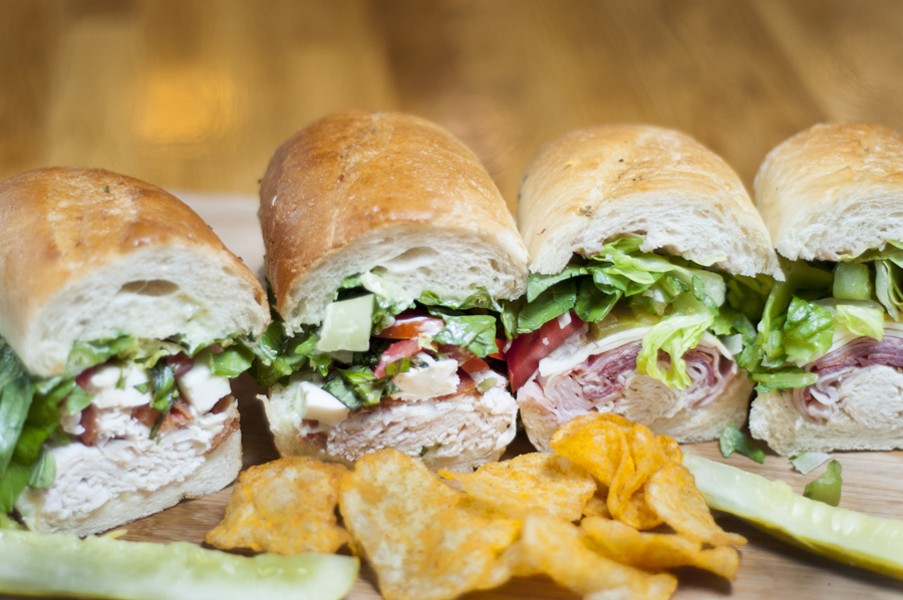 My former-New Yorker companion admired the authenticity of La Pecora Nera's trappings: The subs come wrapped in real deli paper, tied in a bow with twine, even if you eat in on the cute patio.

He placed a more important "yes" vote after unwrapping a rare roast beef sub with lots of spinach and some horseradish mayo for bite: grunts of pleasure.

La Pecora Nera (accent on the "Pec") is a first restaurant for chief cook and rapid sub assembler Zach Kostegian, after 15 years working at an Italian place in Dearborn Heights, Cariera's (the other co-owner is David Ayyash of nearby Chickpea in the D). The two named the place La Pecora Nera — "the Black Sheep" — Kostegian says, because their idea was to put a different spin on Italian sandwiches.

So it's not a bad type of black sheep, and not really far out, either.

The standby Italian meats are there — salami, mortadella, capicola, meatballs — and then some Sy Ginsburg corned beef is proffered, to create a Reuben Italiano. The Hamboni is created from ham and bacon, for more of a club sandwich feel. Turkey is available for the timid, and there are two vegetarian offerings — one is a caprese sub that uses fresh mozzarella and basil. Every sandwich has something special going on, whether it's cream cheese paired with salami or a garlic-herb aioli with turkey. A "sandwich of the month" adds another choice, such as August's pastrami and Swiss.

The biggest sellers, says Kostegian, are the Italiano, the Turkey Bella, and the Reuben. The loaded Italiano, the most expensive item at $11.50, sports five meats — mortadella, salami, capicola, turkey, and ham — plus provolone and Italian dressing. With this much going on, the flavors tend to blend together into one indistinguishable but toothsome meat fest.

My favorite was the Reuben, partly because the bread was lightly toasted for crunch but also because of the excellent red cabbage slaw and housemade Thousand Island. As on the other sandwiches, the meat is piled high, and I thought the corned beef shone best on its own.

The meatball sub is like a very meaty pizza, what with the marinara and mozzarella. Don't try to eat it on the go. The salami is the most pungent — dining outdoors at the slatted wooden tables is recommended — but the pungency is ameliorated by a generous schmear of cream cheese. I like the idea, and the result, of putting together quintessentially New York Italian and quintessentially New York Jewish.

Kostegian makes a fresh soup every day. I can recommend the thick tomato-mushroom-spinach, which has a very deep and satisfying, yet fresh, tomato flavor.

I was less happy with La Pecora Nera's Caesar, served in a big clamshell like a salad in an airport. There's not much to it except a massive amount of romaine — few croutons, no anchovies, and those tomatoes just do not belong. At least the Parmesan was shaved and not shredded.

Better was an equally massive orzo-spinach salad, with feta, cucumbers, and separate containers for toasted almonds, top-notch black olives, and dressing, so the diner adds ingredients at will. There's also an antipasti salad with three meats and two cheeses. No way you would order a sandwich and salad here unless you're sharing.

Dessert is gelato (and what gelato) from Gelato Fresco in Toronto. Who says "ice cream" has to be high in fat to be luscious? The makers brag that their gelatos range just from zero to 10 percent butterfat, and also highlight their ingredients, such as Dutch cocoa and "fresh caramel (sugar burned in a copper pot!)." I truly believe the chocolate at La Pecora Nera is the best chocolate ice cream I've ever had. It does taste like cocoa, with just the barest hint of salt. I would be raving about the mascarpone-pistachio-caramel, too, if I hadn't tasted them both on the same day.

La Pecora Nera has a few grocery items on the shelves next to the two communal tables inside, but don't expect to get your shopping done; they're more for impulse buys: lemons, One Potato Two Potato kettle chips, Amaretto cookies, Pizzelle brand Italian waffle cookies (made in Ontario), several flavors of luscious San Pellegrino soda (blood orange, clementine, pomegranate, and orange). After eating at La Pecora Nera, you may well be tempted to take a bit of Italy home with you.