Maybe the last bar at the end of the world 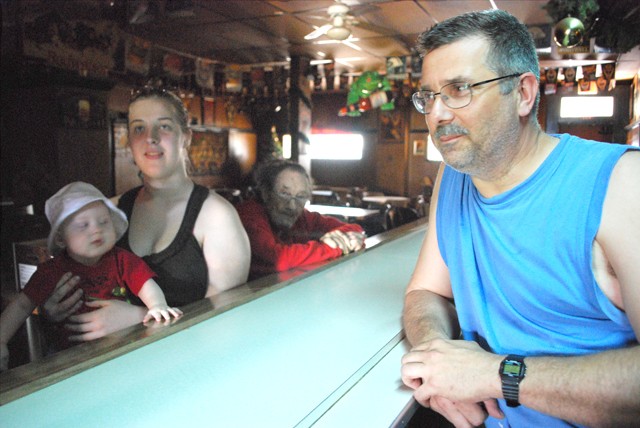 There are three drinkers on the barstools. Here at Dyer's Bar and Grill, that's a packed house. All three live in the apartments in this building, so this is literally their home bar. Besides, along this rough span of Gratiot Avenue between Connor and East McNichols, few strangers ever drop in anyway.

"Every now and then," says Jimmy Dyer, the 48-year-old owner and bartender. "They see a bar sign and there's no bars on Gratiot, so you have somebody going to a game downtown and they're like, 'What the hell is this? We didn't know you were here.'"

Dyer's is as barebones as it gets. If you want a beer you've got few choices. Apart from the Milwaukee's Best on tap for $1.25 a glass, there's Bud and Bud Light, and Miller and Miller Lite. That's it. Cans only, for $1.75. "They're safer," Dyer jokes. "You get hit in the head with a bottle, it hurts a little more."

There's no cable or satellite on the lone TV, so viewing rotates among a handful of meager options. Today it's Antiques Roadshow on PBS, which the drinkers eye with a resigned weariness, the kind you get from years of watching shows you'd rather not watch. The lights are kept dim, so it's hard to see the wall rug portraying dogs playing poker, or the vintage jukebox collecting dust in a dark corner, or the out-of-tune piano people played years ago. A beam of daylight pours in through the open door at the back, shining hard on the faces of the old-timers occupying stools along the bar.

This is the world Dyer supervises, day after day. "It's pretty much not tending bar, it's taking care of the old guys," he says of his job here. "It's kind of like adult foster care, in all honesty."

Dyer's is like the last outpost in a dying place. Bars once lined this stretch of Gratiot before their owners bailed for the suburbs and the drinkers followed.

Now this block is like an island. "We're kind of like a little pie in the middle of Detroit, like another Hamtramck or Highland Park," Dyer says, and then adds his bar is "kind of like the Wild West saloon where everybody meets up and does their thing."

The surrounding neighborhood is a mess — empty homes whose lawns have grown high after the spring rains, front-porch drug sales in plain sight, and groups of unemployed men loitering on street corners during working hours.

The family planted flowers out back and they keep their grass cut, making the property stand out. "You can actually tell when you come through, it's different here," Dyer says. He owns the whole building. The bar shares an address with a used appliance store and 10 apartments he rents to an odd assortment of mostly white, mostly poor, mostly older folks, many of whom grew up in the neighborhood and are the last holdouts, relieved they don't have to wander away from their island to have a beer in a bar.

For years, the family owned a restaurant across the street, then bought this bar in the late '70s, when it was called the Snow Owl and featured German-themed decor, including personal beer steins that hung on the wall for each regular.

Back then, crowds of nearby factory workers who wanted a burger and beer filled the place every day. Those workers, and their workplaces, are now long gone. So is the grill. A few years ago, city inspector demanded they put in an expensive ventilation system. That was the end of the meals.

It's a family bar in the truest sense. Dyer and his wife, nicknamed Snoopy, serve the drinks. Her father, known as Pops, spends his days on a stool at one end of the bar.

Their niece Debbie works here too sometimes, putting her 10-month-old son in the playpen that sits by the cooler. And the customers, usually the same faces they see going up and down the stairs to the apartments, are like family by virtue of familiarity.

Though the place hasn't turned a real profit in years, Dyer keeps the bar open year after year, because almost all his customers are his tenants, and he knows those customers have nowhere else to go. He's become their caretaker in a way.

"I've grown up with most of these guys, so you kind of feel like, what are you going to do, shut down? These guys are pretty much all landlocked in this area anyway. Most of them don't drive. They've been around in this neighborhood probably all their life. Everybody else died, packed up or ran, and they're still here."

Tom Crunk's the exception. He's a suburbanite whose circumstances forced him to move into the inner city, the wrong way along the crowded path of migration out from Detroit. "It's a culture shock, let me tell you," he says, pouring beer from a can into his glass. "I'm starting to learn my way around, but as a norm you don't come down here."

Dyer loves to make fun of him for moving to the area.

Crunk lives in one of the ground-floor apartments. A few years ago he was an engineer at an auto supplier in the suburbs. But the economy crumbled, and he lost his job, then his house, then his health as he underwent knee surgery, which required him to stay with someone who could help him as he recovered. His sister lives in this building, so he moved in with her last year. Thus began his introduction to inner-city neighborhood life in Detroit.

"Had a few problems, had a few discussions with people. They know not to discuss it with me anymore," the stocky 54-year-old says with a menacing confidence. "I might be an old man, but I'm not a shy old man."

He's got a steel door for his apartment to make it harder for burglars to get in, but things still happen. Not long ago, he was lying on the couch when several guys from the neighborhood walked in after admiring his TV from outside.

Regardless, he's armed and ready. "If you wanna come in I'm gonna blow you right back out into Gratiot," the Army vet says. "That's the one thing the Army taught me — how to kill."

Actually, most trouble comes from the police, who apparently can't believe white people still live in this area, let alone operate a bar here. Everyone at the bar shares stories of being stopped, searched, followed or harassed by the cops as soon as they step away from the building.

Dyer has come to accept it as a reality of staying in this neighborhood. "It works on both sides of the line," he notes. "If you're black and you're in the suburbs you get stopped. Same thing happens here — if you're white you get stopped here, because nine out of 10 white guys down here are buying drugs and they shouldn't be around. It's the same thinking, and I understand that."

Though few new faces are seen here, and there are countless hassles in this area, Dyer says he stays because he has optimism about the city's future, and his future in it, despite being in a part of town where there's little reason to be hopeful right now.

"Somewhere down the line something's got to happen good in the city," he says. "I think we've already been to the bottom stage; there's no way but up. But how far up before you realize something's happening? Other parts of the city might actually be seeing some signs, but we might be stuck in the last war zone."

Crunk finishes his beer. Pops nurses his in the shadows. And the baby rests in Dyer's arms as he sips a coffee and tends to the old-timers, and makes fun of Crunk yet again for moving to this neighborhood.

Then Crunk leans back, thinks for a second, and says in a blend of both sarcasm and sincerity, "This is the best bar in the world." And he cracks open another can of beer.