Courtesy of Leafly.com Leafly.com has devised a new way of visualizing marijuana strains and their attributes.

The marijuana flower can be a captivating sight with its crystalline trichomes, blend of earthy colors, and heady aromas. Well, now there's a new kind of informational graphic to visualize marijuana flower and help explain what it all means to consumers.

Leafly.com is rolling out a new Cannabis Guide this week with a new graphical representation of marijuana strains that the folks there hope will become ubiquitous. Leafly brands itself as the "world's largest cannabis information resource," and their new guide is a visual way of helping users identify marijuana genetics that will meet their wants and needs.

The guide "simplifies exploration of cannabis strains for consumers through flower-like visualizations that provide a straightforward way to explore the complexity of cannabis," according to a Leafly press release. "It uses easily recognizable shapes to illustrate each strain's dominant cannabinoid profile — circles for CBD and diamonds for THC — and uses vibrant colors to illustrate flavors and aromas that come from terpenes."

I find the whole thing rather captivating, and although it takes a minute to figure out what's going on, once you got it the whole thing seems like it can really help people make their way through the marijuana genetics maze.

In an online meeting, Leafly's vice president of design, Brandon Hensley, went over the concept and the process with me. First of all, he says, the traditional three cannabis categories of indica, sativa, or hybrid are oversimplifying things, and are now mostly irrelevant. The common belief is that sativas make one more energetic and indicas leave you in couch lock. Unfortunately, this has become a too dominant narrative as to how a strain affects a user. Although things are changing, there was a time when the typical budtender had little more than that to offer in terms of information. More and more I've been hearing from folks on the more technical end of this that those classifications mean little.

The other irrelevancy will be the gazillion creative or just downright silly names for strains, like Gorilla Glue or Alaskan Thunder Fuck. The poetry of strain naming will go on, particularly for the little boutique shops, but pretty much they'll matter no more than cute marketing metaphors.

"The cool thing about this system is it helps you move beyond the arbitrary names of strains," Hensley says. "If we can get the data on that strain, the names become less important in the store and more focused on the visual properties."

What does matter is the balance of compounds like cannabinoids and terpenes, and their balance with each other and with your endocannabinoid system. The same flower can affect different people in different ways based on your particular body chemistry — most cannabis users have experienced that phenomenon of sharing a joint, and one person finds it agreeable while someone else doesn't.

"It gives people more confidence, particularly new people," says Hensley. We don't want anybody to have a bad experience regardless of their experience level. ... We really tried to make it as simple as possible regarding the complexity of cannabis." 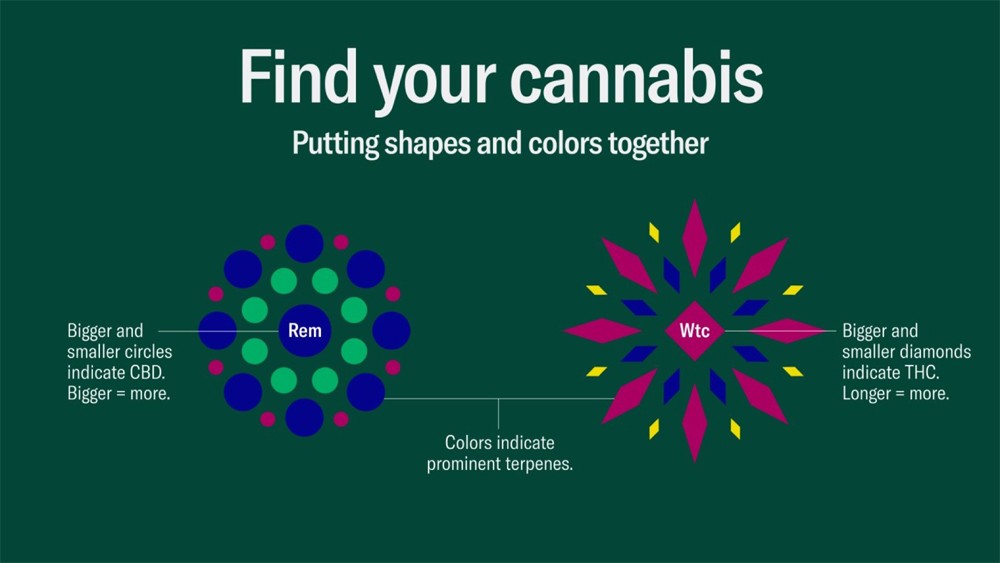 Here's how it works: Leafly's folks have assigned geometric shapes to different attributes of the genetics. CBD is represented by a circle; THC, the stuff that gets you high, is represented by a diamond shape. There are shapes for other cannabinoids, but let's not get into those here. There are also shapes and colors for the terpenes such as pinene (green), myrcene (blue), terpinolene (orange), limonene (yellow), and caryophyllene (purple).

The visual flower representation, which kind of resembles a fractal design, is created by a generator on the Leafly site. It begins with a shape of the dominant cannabinoid at the center — the circle or the diamond. If that's THC, then it is a diamond. If it has a lot of THC, then the diamond is bigger; if not so much, the diamond is small. The user controls the size with a sliding scale beneath your flower, and the diamond's color is determined by the dominant terpene. So if you like the citrusy limonene, the diamond will be yellow.

Petals around the central area are created by the shapes and colors of other components. Maybe there is a bit of the peppery caryophyllene there represented by purple, and a smaller amount of pinene with the green. If there is some CBD in the mix there will be small circles around the central diamond. The comparative sizes of the different objects are in proportion to the amount of that substance in the strain. The more THC, the bigger the diamond shapes in relation to other things. 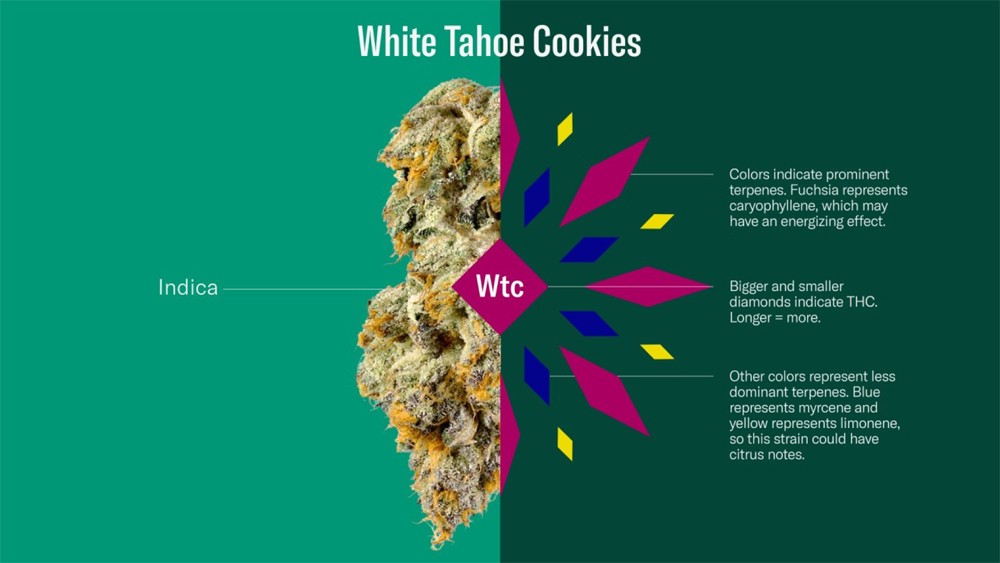 This might sound complicated, but ultimately it's as simple as clicking and sliding a few buttons on the Leafly website indicating that you want something with a high level of THC with a fruity taste and hints of citrus. Your flower will appear along with the name of a strain that fits the profile. It will also list the names of other strains that fit the same genetic profile, or are very close. So if you like Blue Dream but there is none available, the flower generator will show which other genetics have the same or similar profile to what you want. Or, you can explore: Start with the name of something you like, then find something that is similar but may have a few different tweaks.

Leafly developers designed this proprietary software in consultation with several testing facilities across the country, including PSI Labs in Ann Arbor, in addition to comments from numerous consumers. Developers there expect the design to evolve as more information is available to the generator. The folks there envision seeing the Leafly flower depictions some day used on packaging for cannabis products, with the hope that people will then look for their flower design rather than dragging through myriad names of strains.

"Cannabis has unique physiological effects for each of us," Leafly CEO Tim Leslie said in the press release. "As our understanding of cannabis grows, so does our need for a more sophisticated, yet intuitive language to help people navigate the very personal effects cannabis has."

Will this catch on? Leafly has a pretty big footprint in the cannabis world. It's not a big leap from people finding their flower on the Leafly site and looking for it in the store. Certainly the industry needs something that standardizes analytics and leaps over the strain game.

This could well be it.