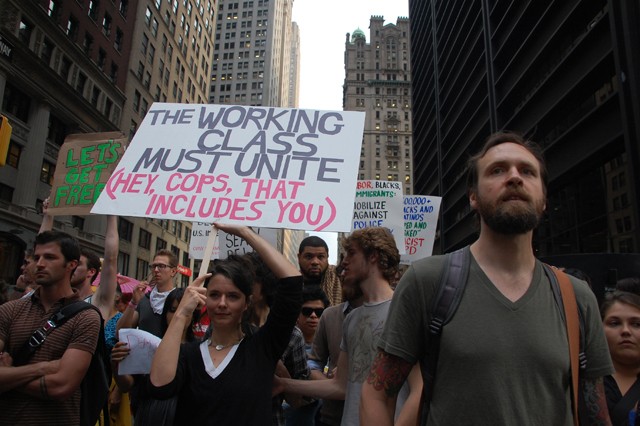 When the Hits made its way over to Dearborn on Saturday night to hear what journalist William Greider had to say about the economy and the prospects for its future, there was something else we were interested in learning.

What, we wondered, do real socialists think when they hear right-wingers attempting to tar our current president by calling him one?

When we posed that question to Maria Svart, the head of the Democratic Socialists of America who was in town from New York City for the annual Frederick Douglass/Eugene V. Debs Dinner put on by the local branch of the organization, her first response was to just laugh. Then she said, "You can quote me on that. I just laughed."

Who would have guessed socialists have a sense of humor?

Once we got her to stop laughing, she began talking about the Occupy Wall Street protests under way not far from where the DSA (which isn't a political party but rather an activist organization) has its national offices. Those protests, she said, are a reflection of just how "fed up" Americans are with the direction this country is heading.

There is dissatisfaction on the far right, as well. The difference is that the Tea Party gets bankrolled big-time by the likes of the billionaire Koch brothers, while lefties such as the DSA remain a movement largely supported by the grass roots.

"Our resources come from our members, and nonviolent disruption is the only way to get the power elite to pay attention," explained Svart. Young socialists, she added, were among the hundreds of Occupy Wall Street protestors that swarmed onto the Brooklyn Bridge on Saturday, blocking traffic for several hours before being hauled away by the police.

As for Greider, the author of several best-selling books who worked at the Washington Post and Rolling Stone magazine before landing his current job as national affairs correspondent for The Nation, he told the gathering of about 150 staunch lefties that his political views changed gradually over the years.

He talked about growing up in Ohio in a family of committed Republicans. But over time, the more he learned as a reporter about how the world really works — and what the consequences of unfettered capitalism truly are — the more he moved to the left.

"Am I a socialist?" he said at the beginning of his talk at UAW Local 600. "No, but I might become one if you get your act together."

A big part of his political awakening came during the early 1980s as he was grappling to wrap his mind around the concept of economic globalization, and what the consequences of those policies would be. It was labor organizers and labor economists who provided what turned out to be the most clear-eyed analyses of those policies.

As for the present, he said, the "right wingers clearly have the momentum" as they continue trying to dismantle programs and policies that have been in place since the New Deal was created to bring us out of the Great Depression and help keep another one from occurring. Programs such as unemployment insurance and Social Security.

If they succeed in "smashing" the New Deal state, predicted Greider, the wealthy, conservative elite will rush to the rescue of governments they helped bankrupt by offering to buy up public roads and water systems and more so that they can be turned into profit-making ventures for the private sector.

In regard to Obama and his reaction to what is perhaps the single most devastating blow dealt to this country's working class — the housing collapse and foreclosure crisis — the administration has only come up with "frivolous and phony programs" to keep people from being forced from their homes, choosing instead to bail out the banks.

That kind of disparity in economic priorities is eventually going to produce a truly populist backlash. It may take a few more election cycles for it to reach a crescendo, said Greider, but a majority of Americans are eventually going to realize that the only way we'll be able to dig ourselves out of the mess we're in is for this country to move back toward the left. —Curt Guyette