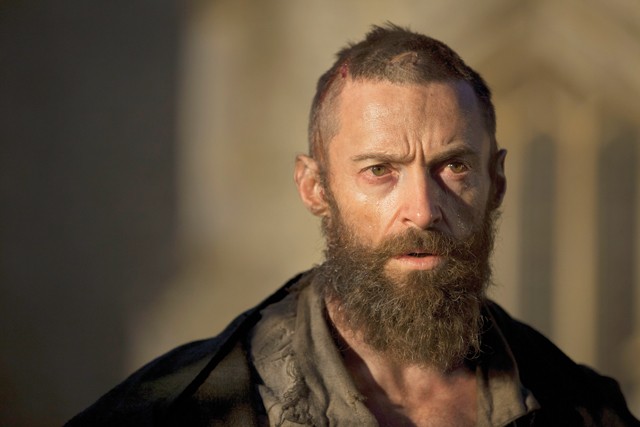 Caked in dirt, lips quivering with emotion, her lovely hair hacked to a patchy mess, Anne Hathaway powers through a show-stopping rendition of "I Dreamed a Dream,” a mesmerizing performance in which the savvy actress cries on cue and pitches her sweet voice to an octave she's sure that only Oscar voters can hear. Hathaway's scant screen time is the only thing brief about this outsized, towering epic about private, personal tragedies that overflow onto filthy Parisian streets in the dying days of the monarchy. This opulent musical extravaganza was adapted for the screen from the venerable commercial juggernaut stage show of the 1980s, which was itself built on the sturdy bones of Victor Hugo's monumental 1862 political soap opera novel. Overloaded with singing, weeping and emoting, Hugo's themes of redemption, dignity, poverty, cruelty and revolution can still be found, under layers of sprayed-on soot and dampness, and through viscous globs of Broadway kitsch. Curiously, this French import (by way of England) has at its core a quintessentially American ethos: You've got to fake it till you make it.

Never afraid to display his theatrical chops, Hugh Jackman plays heroic Jean Valjean, a man who spends many years in prison for stealing a loaf of bread, breaks parole, assumes a new identity and spends the rest of his life attempting to redeem himself, all while being hounded by the ruthless Inspector Javert (Russell Crowe), who refuses to believe that a convict can ever become a decent man. As the years roll by, Valjean encounters a variety of lost souls, from Fantine — whom he accidentally condemns to prostitution and squalor — to her moppet daughter Cosette (Isabelle Allen) — whom he adopts and raises — to, much later, the bold young revolutionary Marius (Eddie Redmayne) — who falls in love with the radiant, grown-up Cosette, played winsomely by Amanda Seyfried. Essentially reworking the shtick they used in Sweeney Todd, Helena Bonham Carter and Sacha Baron Cohen are briefly amusing as a conniving innkeeper and his horrid bride, though their act grows more tiresome with every reprise.

The original score and libretto by Claude-Michel Schönberg and Alain Boubill are crammed into two-and-a-half hours without the mercy of an intermission, and the experience becomes grueling thanks to an antiquated narrative relying on a progression of crises, coincidences and calamities as our heroes stumble from one tragedy to the next, emoting to beat the band.

Tom Hooper has become a go-to director of tasteful prestige pictures, such as the recent smash prize winner The King's Speech, though this project may be too much for him, as he attempts to make the movie all things at once: grandiose and maudlin, triumphant and punishing.

On stage "Les Miz” wallows in spectacle, with hordes of chorus members navigating massive sets. When not busy offering aerial zooms over chilly 19th century Paris, the movie opts for a more human scale. Hooper brings the camera all the way in, for close-ups that go beyond intimate, and right into invasion of privacy. The performers nostrils fill the screen, their tonsils shake at full vibrato, and the lens is pelted with spittle.

The actors performed the songs live on set, rather than the overdubbing that traditionally occurs in movie musicals, and the results are mixed. Some songs, normally belted to the cheap seats, are delivered in a near whisper; the familiar melodies are sometimes fractured in the process of improv. This approach works for performers like Jackman, who can really wail, but leaves weaker singers like Crowe criminally exposed.

Hathaway's attention-grabbing histrionics will undoubtedly afford her future awards and red carpet fashion scrutiny, and she's bound to garner an invite to slum it on Broadway between film shoots. Certainly the adoring legions that made the theatrical version an institution will flock to this one, overwhelmed by the grandeur.

Doubters of the genre will likely remain unmoved by the melodrama, and be left with a hollow feeling. The revolution is always in progress, only now it can not only be televised but also commercialized and blown up bigger than life. mt