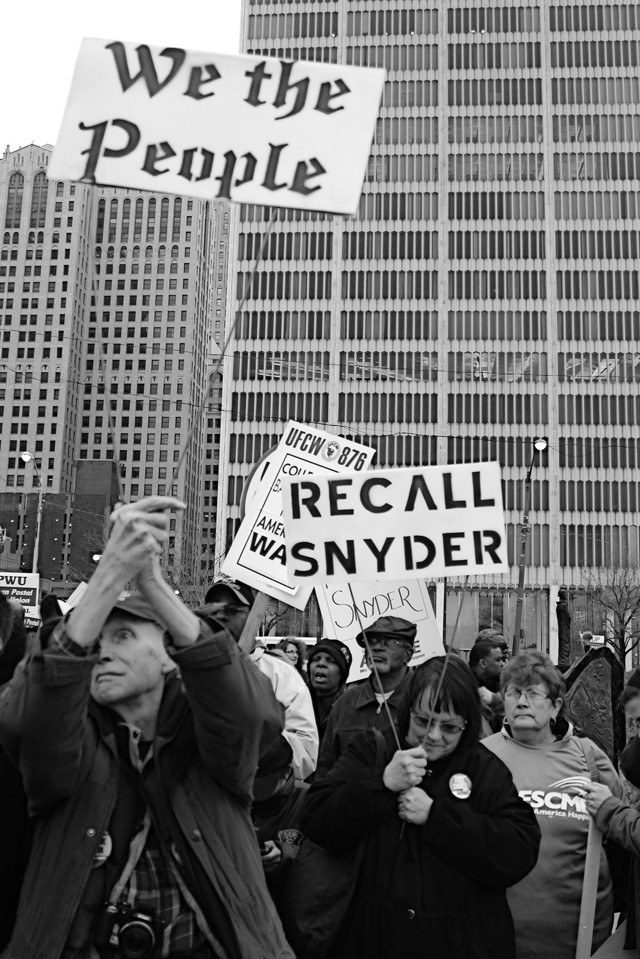 "The nation is sick. Trouble is in the land. Confusion is all around. But I know, somehow, that only when it is dark enough, can you see the stars."

Those words, spoken decades ago, could have been uttered yesterday.

They came from the Rev. Martin Luther King Jr., and were delivered April 3, 1968, one day before he was gunned down while standing on the balcony of a motel in Memphis, Tenn., where he had come to support striking sanitation workers.

On the 43rd anniversary of King's assassination, several hundred union members and progressive activists gathered at Detroit's Central United Methodist Church, a place where King preached a number of times, the last just two weeks before his death.

The Monday gathering served as prelude to a larger rally at Hart Plaza's Labor Legacy Monument, where clergy ranging from Baptists and Catholics to Muslims and Jews presented a united front as a crowd of 1,000 people or more flexed some organized labor muscle. It was one of more than 1,200 events — teach-ins, vigils, faith services, etc. — organized by the AFL-CIO and its "We Are One" movement, according to the union website.

What struck News Hits was how far we still have to go to achieve the social justice King championed.

As then, minorities are still being hit hardest by economic disparities. Marc Moriel, president of the National Urban League, made that point clear when the league released its annual "State of Black America" report last month at Howard University:

"[T]he Great Recession has battered, bruised, and pummeled the nation — even more so when it comes to our nation's African American and urban communities. While some economists have declared that the recession is technically over, we say there is no complete recovery while the unemployment rate in black America stands at more than 15 percent. We also say there is no complete recovery when the homeownership rate for African Americans has declined by 3 percentage points, representing thousands upon thousands of African American homeowners who have lost their homes."

Minorities may be hurting worse, but this nation's poor and working class all feel the pain these days. Here in Michigan, the rush to the right has been placed on a fast track since Republican Rick Snyder became governor and the GOP grabbed both houses in the Legislature.

The emergency financial manager legislation that gained speedy approval opens the door for unelected officials to impose a kind of "financial martial law."

As Ed Brayton observed in the online publication The Michigan Messenger, under the new law, emergency managers appointed by the state treasurer "are given near-dictatorial powers to dissolve contracts, sell off assets and even disband elected boards."

We are witnessing a subversion of democracy, but we are also seeing a backlash. The protest at Hart Plaza is just one example. As the people there chanted, "This is what democracy looks like."

Things have been going in the wrong direction for a long time. Since the 1980s at least, workers and the poor have seen a steady erosion of wealth as riches accumulated at the top of the economic ladder.

"During the late 1980s and the late 1990s, the United States experienced two unprecedentedly long periods of sustained economic growth — the 'seven fat years' and the 'long boom.' Yet from 1980 to 2005, more than 80 percent of the total increase in Americans' income went to the top 1 percent. Economic growth was more sluggish in the aughts, but the decade saw productivity increase by about 20 percent. Yet virtually none of the increase translated into wage growth at middle and lower incomes. ..."

But those tremendous gains at the top weren't enough for the relatively few reaping the benefits. As in Michigan, the budget crises facing federal, state and local governments are hitting the middle class and poor particularly hard.

The governor's proposed cuts to public education aren't of much concern for those who can afford private schools. The same for the proposal to eliminate before- and after-school programs, which allow those who can't otherwise afford childcare to keep working at their minimum-wage jobs.

And as state revenue sharing is reduced, municipalities already dealing with falling revenues because of the housing crash are looking at reducing essential services, including police and fire departments.

Meanwhile, along with a proposal to tax pensions and a reduction in the time people can collect state unemployment benefits, Snyder is asking the Legislature to give a $1.8 billion tax break to the state's businesses.

It seems the self-declared "nerd," a former corporate executive and venture capitalist who poured millions of his own dollars into his gubernatorial campaign, is proving to be far more of a conservative shark than voters might have expected when they elected him last year.

At the Hart Plaza rally, John Wilhelm, national president of Unite Here — which represents workers in the hospitality, food service, gaming, laundry and textile industries — talked about the recent events that are stirring workers to action.

In their attempts to use the economic crisis as a tool to strengthen capitalism's hand, he said, corporate America has made a mistake: "They've gone too far."

That observation carried echoes of the speech Martin Luther King Jr. gave on the eve of his death, when he made his remarks about stars in the dark. Sometimes it takes a pervasive gloom for people to see the light.

There is no doubt that this is one of those times. What remains to be seen is whether the talk of engaging in a new fight for power, and prayers for the strength to succeed in that struggle, will result in real change.