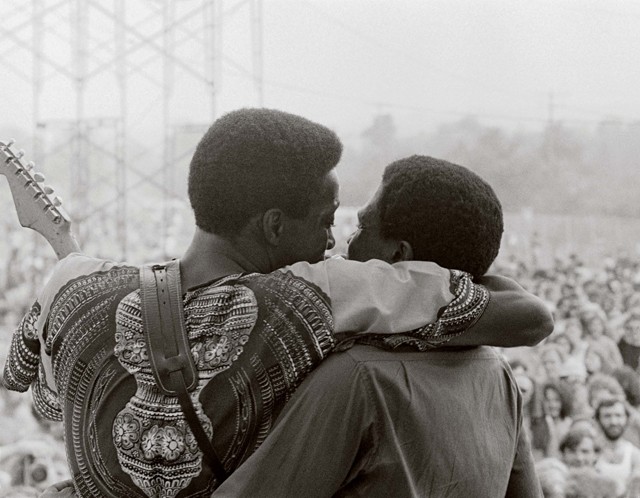 Thanks to the American-roots-aping rock 'n' roll of the British invasion, a small contingent of Michigan blues freaks lost their minds in the late '60s, digging record crates from Detroit to Chicago to hunt down these imitators' sources. When they learned the blues weren't dead, but actually alive, well and now electrified, hiding in plain sight near their own back yards, it was a revelation.

As with any true religious experience, the next step was sharing the good news; in 1969, the Ann Arbor Blues Festival, the first large-scale, all-blues fest in the country, was born. Forty years later, Blues in Black and White documents this heady time and ambitious undertaking in a loving, stunning set of pictures shot by late Ann Arbor commercial photographer Stanley Livingston, who died of a heart attack at age 69 in September.

The images and stories collected in this book ooze with the kind of obsessive fandom and sense of importance typically reserved for (but by no means exclusive to) men in their late teens and early 20s. There's a reason these pictures, and the festivals they document, happened not just at a particular point in time, but also a place: the Midwestern college town of Ann Arbor.

Almost any blues name you could think of played the 1969 and '70 festivals, and Livingston shot 'em all, from headliners to sidemen. In high-contrast black and white, the pictures frame each player's personality: the holy-ghost terror of Son House; the glitzy flash of Lightnin' Hopkins; the wild-eyed joy of Hound Dog Taylor; the transporting stare of Howlin' Wolf.

The drama is in electrifying performance shots — such as Freddie King squeezing sweat from his guitar neck, Mance Lipscomp sitting in a lone spotlight, strumming into the dark — but the impromptu portraits and backstage hangout sessions with the likes of Roosevelt Sykes, Johnny Shines and Freddie McDowell reveal these are also the kind of guys you'd like to drink a beer with.

"Stanley would take pictures in exceptionally low-light situations, and you can see the hairs on Howlin' Wolf's chin," says Tom Erlewine, who designed the book and was Livingston's apprentice at the time of the first blues festivals. "His fanatical attention to detail led to high-quality photos, but he was rapturously in love with these blues musicians."

Part of that love came from a "common way of being" between Livingston, a laid-back guy who spent more time working on his craft than talking about it, and his subjects. "They were not like young, white rock 'n' rollers," Erlewine says. "They were just getting together and loving each other backstage and having a big reunion. It wasn't posturing, it was people having a good time. Big Mama Thornton pulled up with a bucket of boiled eggs and beer. She was selling eggs and beer out of her station wagon."

Livingston's dedication to the players, and his photos, went beyond name recognition. He lived at the festivals, taking in everything. "He was shooting hundreds of rolls of 35 mm — each 36 exposures — making contact sheets, printing a few images that caught his eye and arching his negatives," Erlewine says.

When it came time to put together this book, the first major printing of his blues photos, Livingston pulled out every roll he shot back in the '60s and '70s, poring over hundreds of contact sheets for shots that represented the performers, many of whom were unidentifiable. "They weren't the top men in the blues; they were sidemen," Erlewine says. "But they had great faces."

Erlewine says there was some talk of putting together a show of Livingston's photos in Ann Arbor, as well as a digital edition of the book, just before he died. He's not sure what will happen now. There are still "piles" of negatives, Erlewine says, including more blues images, as well as some of Little Richard and the "Free John Sinclair" concert featuring John Lennon and Yoko Ono.

While Livingston shot away at those first blues festivals, a young Michael Erlewine, Tom's older brother, interviewed the artists on reel-to-reel tape. Michael Erlewine, who later founded the All Music Guide, provides a short history of the festival in the book to set Livingston's pictures in context.

It's hard not to think of Livingston when reading Michael Erlewine's thoughts on the loss of Chicago's Magic Sam between the '69 and '70 festivals. "It was hard to believe we would never hear Sam play again. We had only just found him."