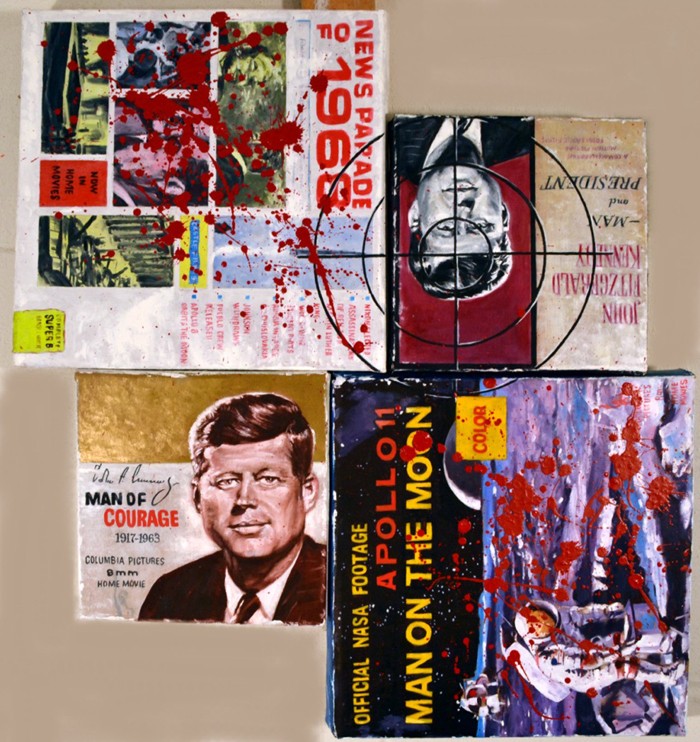 Mike Kelly of Funhouse Productions has curated an art show called Little Black Helicopters: The Conspiracy Theory Show. Hosted by the Tangent Gallery, the exhibition will feature the work of various artists and filmmakers, all inspired by conspiracies.

In an interview outside Cass Café, Kelly tells us that conspiracy theory culture is enjoying a resurgence, largely due to the Internet, which not only gives old conspiracies new life but spawns new theories almost as soon as an event has taken place.

“Some might argue we’ve entered the golden age of conspiracy theories,” he says. “The scale and speed with which information and misinformation spreads in cyberspace is mind-boggling. There’s no longer just one Zapruder film, there’s often dozens if not hundreds of film segments, along with photographs, official reports, and endless media reports to be dissected. Whatever you think of conspiracy theories, the phenomenon, the extent people go to now, it’s almost like an addiction.”

And he’s right, as a simple Google search will show. It’s also a fun and interesting concept for an art show.

Kelly says he’s tried to ensure the show is diverse, with work made by everybody from hardcore believers to skeptics to sarcastic sideliners wanting to poke fun at all the seriousness. Some will reference well-known conspiracy theories, whereas others are what Kelly calls “strong political-paranoid pieces.” Others “are more allegorical and don’t refer to any specific conspiracy theory. They’re just provocative pieces. Some of them are just surreal.”

Thursday’s film lineup deals with the conspiracies surrounding the Oklahoma City bombing and the 9/11 attacks. Friday is “UFO Night,” and will feature compilations of clips from various UFO documentaries. Screenings will conclude Saturday with Dark Side of the Rainbow (1939, 1973), the first 45-minutes of The Wizard of Oz up against the entirety of Pink Floyd’s Dark Side of the Moon, and the eerie parallels that can be made between the film’s visuals and the album’s lyrics. (Editor’s note: The show also includes the premiere of a short experimental film by MT editorial intern Amanda Mooney.) In addition, the show will include performances by Frankenhead, Velveteen Rabbit, Carjack, Man Inc., and the Mike Hard Show.