LIV marijuana provisioning center is set to liven up Ferndale 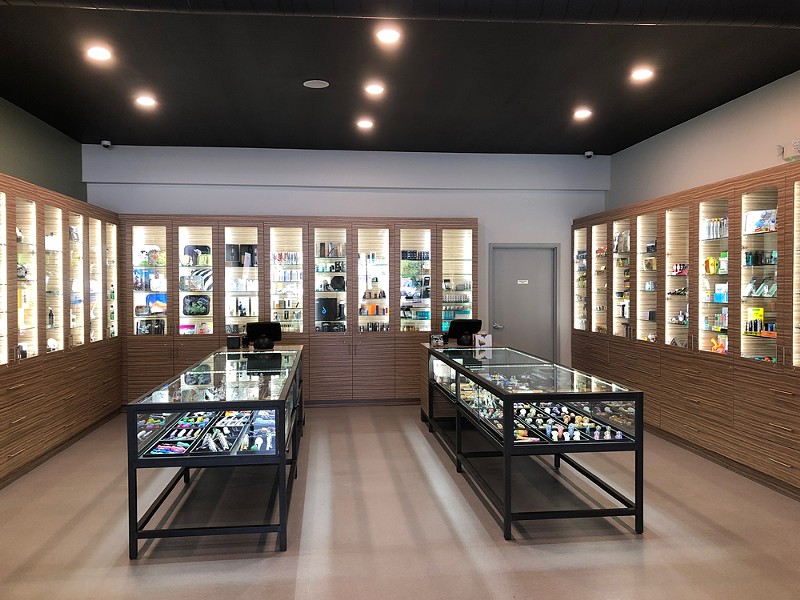 Hilton Road in Ferndale has been something of an afterthought when most folks consider the numerous cultural events in the city. All the clubs, fancy restaurants, boutiques, and whatnot are crowded along Woodward and Nine Mile Road. The city shuts down Nine Mile numerous times each year for festivals and fairs. And while Woodward is never shut down, the Ferndale stretch anchors the southern end of the massive Dream Cruise every year. Through all this, Hilton sits quietly in its own zone. Probably the most consequential daily event there is when the train passes, with the red lights and clanging noises announcing its arrival.

There's another new arrival on Hilton near the intersection of Woodward Heights. LIV medical marijuana provisioning center has scheduled a grand opening with a week of hoopla starting Sept. 16. That's unusual for the area, but you might consider that cannabis shops at all have been unusual around there.

That hoopla includes bands playing outdoors — weather permitting — every day. There will be cornhole and other games, as well as new food trucks. There will be featured vendors each day, giving customers a chance to meet the people behind the products. House of Platinum, Lion Labs, Red Blood Root, Lion Labs, Green Peak Innovations, Church, Mary Medicinals, and a host of others are scheduled for in-store appearances throughout the week.

The LIV approach to that somewhat awkward waiting room in the front of provisioning centers is to use it as a smoke shop, where creative glassware is featured along with wraps and papers, pipes, paraphernalia, and CBD products. A living wall art installation is an ongoing feature of the area. Anyone 18 or older can buy items there without a state registration; the space where patients have to show their state card in order to purchase medical marijuana and products containing THC is in a separate area.

"I haven't seen anything like this," says LIV marketing director Kathryn Hilton. "I don't think that's a common amenity. It's a very unique service that we're offering."

Provisioning-center owners are starting to relax a little and try to get creative with their spaces. It looks like LIV brings some life to the genre. click to tweet

The setup seems another step in the evolution of local cannabis businesses. It also shows that provisioning-center owners are starting to relax a little and try to get creative with their spaces. In the first phase of these stores, owners adhered so closely to the state model without deviation that it seemed like a cookie-cutter approach to the shops. It looks like LIV brings some life to the genre.

It's not like most folks who get into the marijuana business don't have big dreams — but the guys who started C3 Industries, headquartered in Ann Arbor, grew up together, so they've been dreaming big for a long time. Brothers Ankur and Vishal Rungta have teamed with old friend Joel Ruggiero to try to grab the cannabis ring.

C3 is a cannabis producer and retailer with local roots and national reach. These guys already have a grow operation in Oregon, where they employ about 50 people. Last month, they opened the High Profile provisioning center at 20327 Groesbeck Hwy., near Eight Mile Road in Detroit. They're developing a growing facility in Webberville to facilitate their four Class C licenses that allow them to grow up to 6,000 plants.

"We feel like there is a need for high-quality product in [the] market, and we have the experience to do it," says Vishal Rungta.

Pretty much everybody is saying that. We'll see what comes out of Webberville come February, when their first harvest is scheduled. Those plants will supply the 10 to 15 provisioning centers they plan to open under the High Profile brand in Michigan. The guys at C3 are also looking to expand in Massachusetts, where recreational adult use of marijuana is legal.

This kind of expansion is possible because they come with business experience and strong connections in the state. The Rungta brothers both graduated from the University of Michigan and have backgrounds in corporate law and finance. Ruggiero formerly worked as the head grower for a Colorado cannabis company that won several High Times Cannabis Cup awards. They've also managed to raise some $15 million to bankroll their project. That's a relatively modest amount of money for their projected expansion, particularly with multistate ambitions, but one has to start somewhere.

The Webberville grow operation is not yet functional, so High Profile is facing the same issues as the rest of Michigan's industry, as far as finding legal supplies to put on the shelves.

"For now, we have an advantage in that we're from Michigan" says Rungta. "Our team is well-connected in Michigan, and High Profile has a full retail offering from our point of view. It's not ideal from an inventory standpoint, but we're still able to use our relationships to source products."

C3 is relatively small for a multistate business. However, they're sinking their roots in now and seeking potential for strong growth. We still don't know who the big players in Michigan's cannabis economy will be. C3 is making a bid to be among them.

The issue of expungement — or clearing the records of some people with marijuana convictions — is making noise in the state legislature. The current law allows people with one felony or two misdemeanors to apply for expungement after five years. A new package of laws that reportedly have bipartisan support greatly expands that opportunity and includes some non-cannabis-related issues. A varied group of lawmakers is sponsoring different bills. They would allow people with up to three nonviolent felonies and any number of felonies to qualify; grant automatic expungement 10 years after leaving justice system supervision; expungement for marijuana convictions for anything that is currently legal; allow multiple nonviolent acts committed in "one bad night" to be considered one felony; and shorten the waiting period to apply for expungement of misdemeanors.

Expungement is an issue because criminal records, which have been disproportionately foisted on minority communities during the war on drugs, denies one eligibility for housing, education, and employment. Marijuana convictions have been used to deny licenses for employment in the marijuana industry. Although it wasn't part of last year's law to legalize adult-use marijuana, expungement was supported by state Attorney General Dana Nessel and Gov. Gretchen Whitmer.